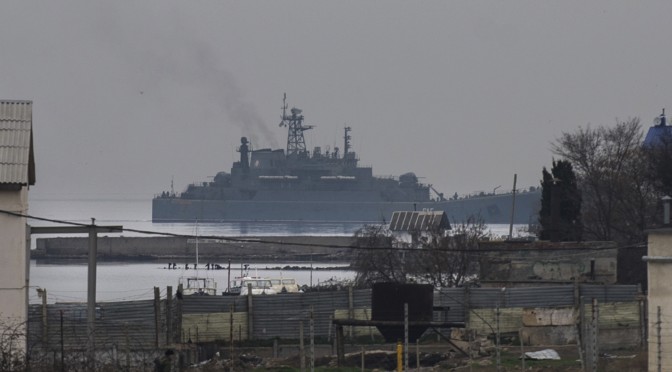 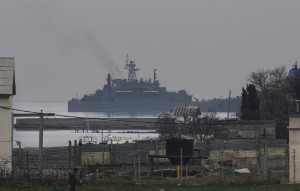 China has consistently supported Ukraine during its agony at the hands of Russian-supported separatists. One of the less-publicized reasons why is that China has relied heavily on Ukrainian firms to help modernize its military.

For example, the active phased-array radar on board Chinese Type 052C destroyers was developed by a Ukrainian company. The current Chinese main battle tank is essentially the current Ukrainian one. The firms involved are all in the heavily-industrialized area in which the Russian-backed forces are operating; it may even be that the Russians are specifically targeting particular Ukrainian towns and companies. From Mr. Putin’s point of view, the Ukrainian companies may be unwanted competitors with the military industrialists on whom he depends for much of his power. At the least, he is trying to put them out of business. The white trucks supposedly carrying humanitarian aid into Ukraine from Russia were actually arriving to plunder Ukrainian factories of their modern machine tools. What the West may not want to sell to Mr. Putin, his forces can steal.

The Ukrainian plants and development companies exist because of policies implemented long before the Soviet Union broke up. The rulers of the Soviet Union were always worried that nationalism would break up their country — as, in the end, it did. One of their insurance policies against breakup was to make it difficult or impossible for those in any one of the republics making up the Soviet Union to build key items independently. For example, gas turbine ships built in Leningrad (St. Petersburg) in Russia were powered by gas turbines made in Ukraine. Their torpedoes came from Kazakhstan. Sonobuoys came from Ukraine, as did helicopter dipping sonars. Some ballistic missiles came from Ukraine. The only shipyard in the old Soviet Union capable of building carriers was in Nikolaev, in Ukraine. However, any carrier built there was armed with weapons and sensors from elsewhere in the Soviet Union, mainly from Russia.

In Soviet times, none of this really mattered. The Ukrainian factory making gas turbines responded to commands from Moscow to deliver engines to St. Petersburg, just as any factory in Russia did. There was little or no distinction between what happened in Moscow and what happened in, say, Nikolaev — no border, no transfer of cash. To a considerable extent design organizations were set up in Ukraine in the early 1960s or the late 1950s because Nikita Khrushchev, who ran the Soviet Union, was Ukrainian. For example, Khrushchev decided to reward his homeland by transferring the Crimea to it. Unsurprisingly, Russians applauded its seizure, since they had never considered the transfer legitimate. Ukrainian independence is a much more substantial issue, although most Russians apparently consider it a spurious notion, its separation a penalty imposed by the West at the end of the Cold War.

Once the Soviet Union broke up, the Soviet -era distribution of facilities suddenly mattered a great deal. All of the constituent republics of the old Soviet Union were suddenly plunged from a world of command by Moscow to a world of cash purchases. The Ukrainian plant could still make gas turbines, but if Moscow wanted a set for installation in St. Petersburg it suddenly had to pay up with real money. That was not easy. In time the Russians built their own gas turbine factory, but while that was happening they had to power ships with steam plants, because the steam plants were being made in Russia.

Conversely, key components of the carrier Varyag, afloat at Nikolaev, could not be delivered because they could not be paid for. The yard had no way to complete the carrier. Parts of her weapon system were visible for some years on the pier alongside, incomplete and hence impossible to install. In much the same way the Ukrainians had no way of completing a Slava class cruiser left nearly completed when the Soviet Union broke up. The carrier proved saleable — its transfer may have been the beginning of Ukrainian arms exports to China — but the cruiser did not. Even Ukrainian governments clearly favoring the Russians could not conjure up the resources to give the Russians weapon systems or platforms they wanted, because it took cash to move equipment over the border.

With their Russian (ex-Soviet) customers no longer paying, Ukrainian firms looked elsewhere, and they seem to have found their main customer in China — which certainly did have lots of cash. Exports were not so much finished equipment (which would probably have required components from elsewhere in the former Soviet empire) as innovative designs, such as the active phased-array radar. From time to time the Russians have tried to police the export of military data and know-how from their country, but once the Soviet Union broke up Ukraine must have made such controls a mockery in many cases. That might not have mattered had Russian military R&D kept advancing at its pre-collapse pace, but the cash shortage stopped most of that, too. Ukrainians who knew what the Soviet Union had developed by the time of its collapse could sell just about anything Russians could.

For a time, the Russians recovered to the point that they did have cash, but Russian military producers faced much higher costs at home, not least to feed an extremely corrupt political system. Now that a plunging oil price has cut Russian cash resources, it is even more difficult for them to buy from Ukrainian firms. It must be doubly difficult if they have to compete with much wealthier Chinese buyers. Theft is a much easier way to obtain the necessary products. Since it includes the theft of production tooling, the plants in question can be re-established in Russia, where their products will be far more affordable. Hence the systematic looting of plants in Ukraine. Looting also circumvents the effect of a falling price of oil, which drastically reduces hard-cash resources in Russia.

If the Ukrainian agony were all about money and access to technology, it would be unhappy enough. However, a major the driving force is nationalism. Vladimir Putin’s only important attraction for Russians is nationalistic: he is seen as a strong man who will restore the strength of the motherland, and he will also expunge all of those unhappy guilty memories of the Soviet past. In this narrative, the West is the enemy who broke up the Russian Empire and thus sought to crush Holy Russia. Anyone familiar with Russian history before the Revolution can recognize the sort of policy Mr. Putin is following. It takes a very committed Russian nationalist to say, as some have in recent days, that the falling price of oil is part of a deliberate plot on the part of ‘certain organizations’ in the West intended specifically to weaken Russia. Ukraine was the oldest part of the Empire, and its recovery excites Russian nationalists. Before he annexed Crimea, Mr. Putin was extremely unpopular. People in Russia saw him for what he was: a thief working with larger thieves to plunder their country. Afterwards his popularity soared, and old-style raw Russian nationalism became a ruling force.

Russian nationalism is opposed by Ukrainian nationalism. It may not be particularly powerful in the Eastern Ukrainian regions in which the Russians and their friends are operating, but in much of the country it is alive and well. Ukraine has a distinctive culture and language. The language and the alphabet are similar to Russian, but by no means identical. Ukraine enjoyed brief independence after the Russian Revolution. During the late 1920s and early 1930s the government in Moscow created a famine in Ukraine that killed 6 to 10 million people in the name of collectivizing farming. Ukraine had been the breadbasket of Europe, its wheat exports the major source of foreign currency to Czarist Russia. After collectivization, the Ukraine was badly enough ravaged that in the 1950s the Soviet Union found itself buying wheat abroad.

The horrors of the 1920s and 1930s remained fresh in Ukrainian minds when the Germans invaded the Soviet Union in June 1941. Initially Ukrainians understandably welcomed the Germans as liberators, only to discover that the racist Germans lumped them with the Russians as sub-human. Even so, they hated the Russians even more, and a low-level insurgency continued well into the 1950s. The Ukrainian view of the man-made famine is somewhat analogous to the Polish view of the Soviet massacre of Polish military officers in 1941 at Katyn. Each was a horrific crime committed by the Soviet Union and then buried. Under Soviet domination, denial that the Soviets had committed such crimes became a test of political loyalty. Once Ukraine and Poland were free of Soviet control, memory of such crimes helped generate nationalist hatred for the Soviets. When Mr. Putin glorifies the Soviet Union which produced him, he enrages those it tortured. Victims inside the Soviet Union are less than popular in the current nationalist climate, but victims outside are in a very different position.

To further complicate matters, another Soviet-era strategy for binding together the Soviet Union was to encourage ethnic Russians to settle in the various republics forming the Soviet Union. That produced large ethnic Russian minorities in countries like Latvia and Ukraine. Mr. Putin is encouraging the ethnic Russian minority in Eastern Ukraine to revolt against the government in Kiev. Although he is enjoying a short-term advantage, surely what he has done has made other post-Soviet governments uncomfortably aware that they may be harboring hostile minorities. They may decide to do something about them before they can revolt.

If that seems an extreme extrapolation, remember that before World War II Hitler exploited the manufactured resentments felt by a large ethnic German minority in Czechoslovakia (in the Sudetenland) to dismember that country (he did not have to resort to invasion or even to proxy invasion, as in Ukraine). Governments who remembered what minority Germans had done in the 1930s expelled them after Germany collapsed in 1945. Many Germans found themselves walking all the way across Poland from what had been East Prussia, and for years the cry to recover that territory resonated through German politics. What is likely to happen now in places like the Baltic states? Their governments lived through decades of repression in the name of the Soviet Union, but up to now they have been relatively restrained about the Russians in their midst.

Norman Friedman is author of The U.S. Naval Institute Guide to World Naval Weapon Systems. This article can be found in its original form at the Australian Naval Institute here and was republished by permission.

One thought on “The Gutting of Ukraine”