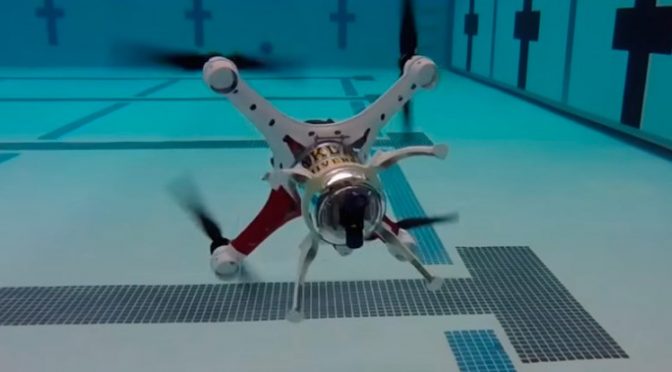 What are some of the ways the U.S. and other countries could defend maritime assets against swarms of Sea-Air drones? Consider a convoy system with human centered technology, algorithms from nature, and elements of gaming.

The FAA estimated that one million drones would be sold during this 2015 holiday season. This estimate was based primarily on the proliferation of flying drones, however new domains of operation may open up soon. Premiering in 2015, the Loon Copter proves that, in time, these devices will be capable of traditional aerial flight, on-water surface operations, and sub-aquatic diving. Embedded Systems Research at Oakland University created the Loon Copter in 2014. In 2016, the design placed third in the UAE Drones for Good competition. The system works in air as well as in water because the four rotors balance and cut through air and water equally well.

According to the New America Foundation, at least 19 countries possessed or were acquiring armed drone technology as of 2015. The Washington Post and The Aviationist reported in July of 2014 that even non-state actors like Hamas have manufactured drones capable of firing rockets or missiles. At the time of reporting it was unknown whether this specific group had the ability to launch missiles, but the story does show the willingness of non-state actors to weaponize technology. The same Washington Post article describes how low-tech “suicide” drones effectively function as guided missiles. With the history of state actors increasingly acquiring armed drones and non-state actors weaponizing drones, Sea-Air drones could open new realms of battlespace.

“The profound influence of sea commerce upon the wealth and strength of countries was clearly seen long before the true principles which governed its growth and prosperity were detected.” –Alfred Thayer Mahan

Sea-Air drones are not currently available off the shelf, so their ramifications are not yet recognized. If non-state or state actors designed suicide drones with sufficient range, it would be very difficult to defend global maritime trade against these threats due to the sheer size of the oceans. The Canadian Military Journal hypothesized that it is only a matter of time before pirates use drones offensively. Articles like these contemplate an important issue, but are limited by only considering the skies. Currently, our ability to detect air drones far exceeds capabilities to detect devices beneath the surface of the ocean. Even by diving ten or fifteen meters beneath the surface, Sea-Air drones may be able to elude satellites. NASA’s Ocean surface topography site describes how the best satellites measuring ocean temperature pierce only one inch below the ocean’s surface.

Shrouded by shadowy depths, would-be aggressors could potentially take down or ransom large freight vessels and trade flows that are so essential to many countries’ survival. According to Rose George in “Ninety Percent of Everything,” nearly 90% of goods are transported by sea. The stakes are high and the arena is huge. While it’s unlikely that every inch of the sea will become a combat zone, NOAA estimates that there are nearly 321,003,271 cubic miles of water in the world’s oceans. To this end, DARPA is re-thinking distributed defense by creating small aircraft carrier cooperatives. In the face of such a large and deep strategic chessboard, what are some of the ways the U.S. and other maritime nations could defend shipping from Sea-Air Drones? One option would be to revive the convoy system. The tipping point for such a decision may have to unfortunately be a tragedy with lives lost at sea. By contemplating these scenarios now, we could build in defenses before deaths occur.

“When [the enemy] concentrates, prepare against him.” –Sun Tzu

The cost of drone technology, like other innovations, continues to decrease; beginners models are available for less than $100. As this trend is likely to also occur in the maritime arena, it would be wise to match high-value vessels with an accompanying group of friendly Sea-Air drones offering constant defensive protection. In other words, a convoy must have the ability to destroy or electronically neutralize attacking drones. A ship with a 24/7 security presence would likely be safer than standard battle group coordinated operations. This is because there are simply too many ships at sea at any given time to protect them all through traditional means. The International Chamber of Shipping estimates there are least 50,000 merchant ships plying the oceans at any given time. Having constant convoys would reduce vulnerability amidst the uncertainty of when, where, and how an enemy might attack.

These convoys could be combinations of complex programmable drones capable of truly autonomous decisions and human operated systems. The most successful formations might be inspired from millions of years of evolution and derived through phenomena like flocks of birds and schools of fish. In such swarms it would be possible to make a human operator the “lead,” balancing machine autonomy with human decision-making. To this end, P.W. Singer and August Cole’s futuristic Ghost Fleet novel describes human helicopter pilots flying missions in conjunction with drones. The video below shows many different formations that could be programmed for swarms.

In order to recruit talent, the defense community might consider incorporating crowd-sourcing and gaming to meet increasing demands, at least until convoy defense systems can function in fully automatized ways. Pilots could be given a convoy interface (like Eve Online) and point systems tied to real world rewards to incentivize behavior. With this approach, the U.S. could capitalize upon large reserves of talent to protect trade, coasts, and even fishing vessels. This is merely an opening suggestion. There would, of course, be clear difficulties with such a strategy, such as ensuring a clearance system, similar to that of the Merchant Marine, payments to operators, and contract stipulations surrounding the use of force. However, the proliferation of third-party defense contracting proves that new types of defense arrangements can be made quickly in the face of emergent threats.

It may be many years before Sea-Air drones, suicide drone piracy, and other forms of maritime threats emerge in full force. However, there are already clear modes of attack and high valued targets. The future may be hard to predict but that shouldn’t it preclude it from strategic thinking.

Jack Whitacre is an entrepreneur and former boat captain who studied international security and maritime affairs at The Fletcher School of Law and Diplomacy.