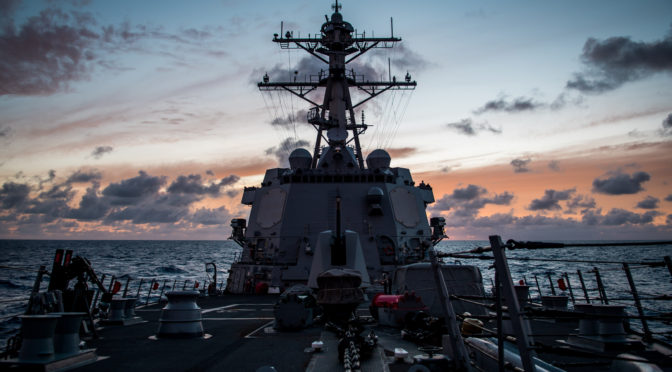 Last week, CIMSEC launched a series of articles and interviews on the new Battle Force 2045 fleet design unveiled by the Secretary of Defense. In this series, contributors shed light on why the Defense Secretary may have felt compelled to seize the fleet design process from the Navy, the tactical and technological trends that drove the fleet’s composition, and whether the new fleet is fiscally feasible.

Several themes emerged. The Navy’s prior shipbuilding plans and force structure assessments may have remained too wedded to existing platforms, and not moved out aggressively enough on fielding new ship types that would better reflect the evolving nature of high-end conflict. This inclination on the part of the Navy as well as other underlying assumptions may have caused the Secretary of Defense to seize the fleet design process and push the Navy toward a different outcome.

Whether this new fleet is affordable is highly dubious in the eyes of some. But whether a 500-ship fleet could be afforded is less relevant in the near term. What is more significant is that new ship types have been called for, and how the final number matters less than beginning to build sooner rather than later. But new ship types will require sufficient experimentation and margin for adaptation, and recent shipbuilding experiences with surface combatants has affected the skepticism of Congress. Whether this new fleet can be made real remains uncertain.

During the series, we received some reports of readers experiencing technical issues when accessing the articles and interviews. Please email us at Content@cimsec.org if you would like to have the pieces sent to you as attachments.

Below are the articles and interviews, with excerpts. We thank these contributors for their excellent contributions.

“This level of change is institutionally very hard to accept and will never earn an internal consensus. It threatens community beliefs and disrupts the shipbuilding industrial base. However, multiple outside evaluations of the Navy’s fleet design over the preceding four years had said that the time had come for this level of change, and OSD finally stepped in to make it happen when the Navy did not move aggressively enough.”

Capt. Jeff Kline (ret.) on Bringing the Fleet Into the Robotics Age

“As the new fleet design is incrementally introduced, and the advantages and limitations of new technologies are better understood, tactics can be modified along with concepts to effectively employ them. The greatest risk, of course, is to the networks and communications that tie this fleet together. In a way, this transforms the Navy’s “capital ship” from the aircraft carrier to the fleet network, a natural outcome of distributed operations enabled by the Robotics Age.”

“If the Navy itself has been debating these same issues, why did SECDEF ‘take away’ future fleet design from the Navy (as it has been described in the media and elsewhere) and commission his own study? I will play the cynic—but it is based on 30-plus years of being involved in DoD analytical studies. SECDEFs do these things when they already have an answer in mind, but existing studies don’t really justify their answer. SECDEFs need to intellectually justify their answers to Congress, hence they need a ‘study’ to support it.”

“This is unique in the fact that the Secretary of Defense did not defer to the Navy staff. The writing was on the wall several years ago when Congress demanded multiple perspectives on future fleet architectures, suggesting dissatisfaction with continuing to build the same fleet regardless of trends shaping the future combat environment. Further, I don’t think the Navy really addressed the National Defense Strategy’s four-layer construct of contact, blunt, surge, and homeland defense when they submitted their planned architecture. They appeared to have shoehorned in the same force design and not make the fundamental changes called for.”

“…the concepts are not mature. Nor should we expect them to be. They are an initial attempt to respond to what the Secretary noted is a fundamental change in the character of warfare as it expands into new domains. The intellectual logic has been debated and gamed quite a bit, but the ultimate proof is in experimentation and adaption. A key attribute must be flexibility so that the concepts can quickly evolve as the Navy and Marine Corps experiment and learn.”

“Ideally, in my view, this episode will break up the Navy’s fixation on the aforementioned force structure concepts and approaches, and it will adopt a new approach to fleet design that is freed from the strictures of machine-based campaign analysis based on canonical contingency scenarios. There has been a struggle for the last several decades within the Navy between the strategy shop and resource shop over this, with the resource shop always winning. I hope SECDEF’s intervention will alter that balance of power.”

“The bottom line is that the Hudson and presumably CAPE studies offer fleet designs that are potentially suitable, feasible, and acceptable, if and only if organizational adjustments accompany them. Presumably, both studies were based on a shipbuilding budget no greater than today’s. If not, their feasibility is compromised. It also likely matters how they are implemented, the dynamics of how the Navy gets from its current design to the recommended one while avoiding the perception by adversaries of opening or closing windows of opportunity for aggression.”

“…Congress needs to understand the requirements being proposed and why. Most members of Congress don’t understand specifically the needed mix of ships, aircraft, and missiles required to prevail in a conflict with China. Congressional buy-in will be critical as we determine funding levels for each acquisition program, maintenance, and readiness requirements.”

Dr. John T. Kuehn On Designing for the Long War

“Any expansion or change in fleet structure and size has to include the second and third order requirements for maintenance, trained personnel, logistics, and parts support. Designing around winning a short war as some have mentioned works against this. It is always better to plan for a long war, that way, as in Afghanistan and Iraq, we will not be caught short.”

“The Navy Should Stop Talking About the Future and Start Building It,” by Frank Goertner

“What happened next highlights why strategy in today’s Navy is too fragile for hope. The admiral who signed the Future Fleet Design and Architecture for 2045 transferred within one week of its approval. The Office of Future Strategy lasted less than nine months beyond completion of the report. The CNO who sponsored it retired two years hence. And in the meantime, there were countless executive turnovers within the Navy staff directorates, program offices, and fleet commands on which its recommended reforms relied on for execution and support.”