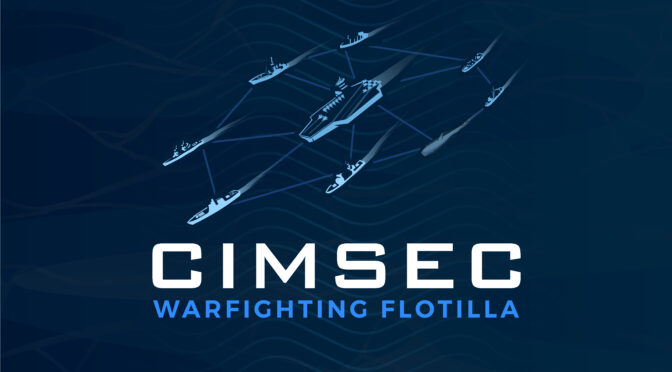 This month the CIMSEC Warfighting Flotilla will be discussing recent naval combat of interest and the latest in naval force development.

Down below is a look at the invites for our upcoming May discussions. The Flotilla will be holding discussions on naval combat in the Russia-Ukraine War, the viability of Lightning carrier platforms and concepts of operation, and the usefulness of wargaming as a unit-level combat training method. If you haven’t already, sign up through the form below to become a Flotilla member and receive the invites to our upcoming off-the-record May sessions.

Last month the Flotilla held discussions on the ongoing transformation of the Marine Corps, improving feedback in warfighting culture, and the themes of the Lying to Ourselves report that was recently republished on CIMSEC. These conversations helped advance some of the debates surrounding these issues and engendered stronger understanding of the cultural elements that shape warfighting organizations.

The Russia-Ukraine war has featured significant naval combat, even as the conflict has predominantly taken place over land. From the sinking of the Moskva and the Orsk, to amphibious landings and submarine-launched missile strikes, the maritime domain remains active and contested. How do we make sense of the maritime domain and its role thus far in the Russia-Ukraine conflict, and what are the lessons learned for force development and force employment? Join us to discuss these questions and more as we consider the maritime dimensions of this ongoing conflict.

Read ahead: “The Russo-Ukraine War at Sea: Retrospect and Prospect,” by B.J. Armstrong

The Viability and Roles of Lightning Carriers

Flattops ranging from LHDs to allied platform such as the Izumo are offering carrier air wing capabilities, although at smaller proportions. How could these “Lightning” carriers help in conflict and steady-state competition? Are they a viable compliment to modern naval force structure, or do they divert resources from larger-scale carrier capabilities that are much more effective? Join us to debate the effectiveness of lightning carriers and their potential roles.

“Whither the Lightning Carrier in an Asia-Pacific War?” by Ben Ho

Wargaming is a versatile teaching tool, but what value can it have as a training device at the unit-level? Can wargaming be broadly adopted in wardrooms and ready rooms across the fleet to enhance readiness and warfighter understanding? Join us to discuss these questions and more as we consider the merits of wargaming as a training method at the unit level.

The Marine Corps is in the midst of a transformation. After decades of focus on low-end conflicts in the Middle East, Marine Corps leadership is looking to transform elements of the force into units that can hold the line against China in forward island chains. But this transformation is not without internal friction and much uncertainty. What are the merits of the concepts of EABO and stand-in forces? How can the Marines better implement these concepts? Join us to discuss these questions and more as we consider the ongoing transformation of the Marine Corps.

Warfighting culture demands healthy and robust feedback mechanisms to ensure professional growth and pursue tactical excellence. But organizational culture can often stifle feedback and allow issues to fester or go unresolved. How can warfighters give better feedback? How can leaders create an atmosphere where feedback is encouraged and delivered constructively? Join us to discuss how to improve feedback in warfighting culture.

Lying To Ourselves and Navigating Zero Defect Culture

Overwhelming requirements and zero-defect imperatives can combine to erode culture and norms of trust that are critical for warfighting effectiveness. How can warfighters better navigate these contradictions and dilemmas? How can leaders change the broader conditions that yield these dynamics? How can warfighters interpret the extent of their responsibility and agency in these circumstances? Join us to discuss these questions and more.