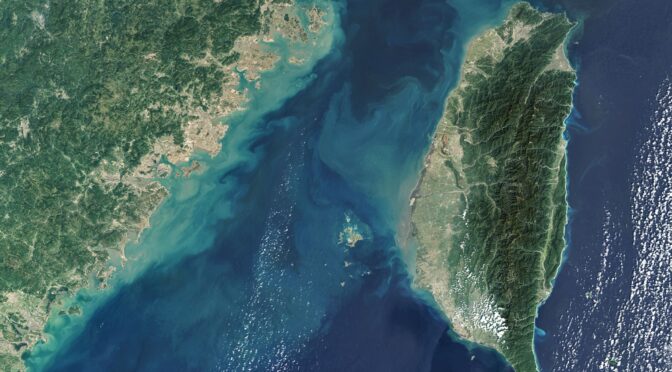 A Turkish news report indicated that the transit of the Taiwan Strait by the USS Sampson (DDG 102) on April 26, 2022, triggered Chinese “counter-measures.” The report further indicated that the transit of the U.S. guided-missile destroyer was perceived by China as provocative and that such transits “intentionally sabotaged peace and stability in the region.” People’s Liberation Army-Navy (PLAN) ships and aircraft were positioned to the southwest and northeast of the strait to shadow the Sampson’s transit. Similar complaints are levied by China when a U.S. warship operates in the strait.

A statement released by the U.S. Seventh Fleet on April 26 countered the Chinese accusations, indicating that the U.S. warship had “conducted a routine Taiwan Strait transit through international waters in accordance with international law.” These transits demonstrate America’s “commitment to a free and open Indo-Pacific” and that U.S. ships and aircraft will fly, sail, and operate “anywhere international law allows.” What exactly does international law have to say about the rights of warships transiting the Taiwan Strait, and what does this imply for future operations and potential reactions?

The Taiwan Strait and UNCLOS

The average width of the Taiwan Strait is 97 nautical miles (180 kilometers); at its narrowest point, it is 70 nautical miles (130 kilometers) wide. Waterways, like the Taiwan Strait, that are greater than 24 nautical miles wide are considered geographic straits (UNCLOS, Article 36). In such straits, high seas freedom of navigation and overflight, and other lawful uses of the seas relating to such freedoms, apply in the water beyond the territorial sea, that is, the exclusive economic zone (EEZ) and/or high seas corridor (UNCLOS, Articles 58 and 87, and Part III). Thus, outside the territorial sea, U.S. warships and aircraft may conduct the same range of military operations in the strait that they conduct in foreign EEZs or on the high seas. Some of these lawful military activities include intelligence, surveillance, and reconnaissance (ISR) operations; launching and recovery of aircraft and other devices; submerged transits for submarines and other underwater devices; weapons exercises; military marine data collection and naval oceanographic surveys; underway replenishment; maritime interdiction operations; DPRK sanctions enforcement; maritime security operations; and flight operations.

The right of innocent passage applies in the areas of the strait along the coasts of China and Taiwan comprising their 12-nautical mile territorial seas (UNCLOS, Article 17) measured from baselines drawn in accordance with international law, which is normally the low-water line (UNCLOS, Article 5). Both China and Taiwan claim excessive straight baselines, which have been the subject of diplomatic and operational challenges by the United States since they do not comply with international law (UNCLOS, Article 7). If U.S. or other nations’ warships sail within 12 nautical miles of the low water line of the Chinese or Taiwanese coast, they must transit that area in innocent passage. Aircraft are not entitled to innocent passage and must remain outside of lawfully declared and recognized areas of national airspace. China’s incremental and incorrect characterization of the Taiwan Strait as either internal waters or an international strait, which would limit other nations’ high seas freedoms is another attempt to disrupt maritime operations that comply with the legal regime recognized in the rules-based international order.

There is no international obligation for any state to refrain from transiting or operating in the Taiwan Strait. The EEZ/high seas corridor of the strait is just another body of water where all states, including the United States, have a right under international law to engage in high seas freedoms of navigation and overflight, and other lawful uses of the seas relating to such freedoms. With regard to the latter, military operations, exercises, and activities have always been regarded as internationally lawful uses of the sea (Official Records, Vol. XVII, p. 244). Moreover, such military activities that are consistent with the principles of international law embodied in Article 2(4) and Article 51 of the United Nations Charter are not prohibited by United Nations Convention on the Law of the Sea (A/40/535, ¶ 188). Thus, the transit of the USS Sampson is not an internationally wrongful act and China may not take countermeasures against the United States.

Given that there is an EEZ/high seas corridor in the strait, U.S. ships and aircraft can, and should, do more than just “transit” continuously and expeditiously through the strait and instead should exercise high seas freedoms in the EEZ. Ships and aircraft of all nations have the right to conduct normal operations in accordance with their high seas freedoms within the EEZ/high seas corridor of the Taiwan Strait. Statements, like the Navy’s April 26 release, give the impression that U.S. ships and aircraft are limited in what they can do while operating in the Taiwan Strait. Future U.S. operations in the strait should clearly demonstrate, through words and actions, that the waters and airspace of the Taiwan Strait are not, in any way, under Chinese control or jurisdiction.

Professor Raul (Pete) Pedrozo, Captain, USN, Ret., is the Howard S. Levie Professor on the Law of Armed Conflict, U.S. Naval War College, Stockton Center for International Law. Prior to his retirement from active duty after 34 years of service, he served in numerous positions advising senior military and civilian Defense officials, including as the senior legal advisor to Commander, U.S. Pacific Command. He also served as the Director of the Navy’s International and Operational Law Department in the Pentagon.

The views expresses are those of the author and do not necessarily reflect the views of the Department of Defense or the U.S. Naval War College.