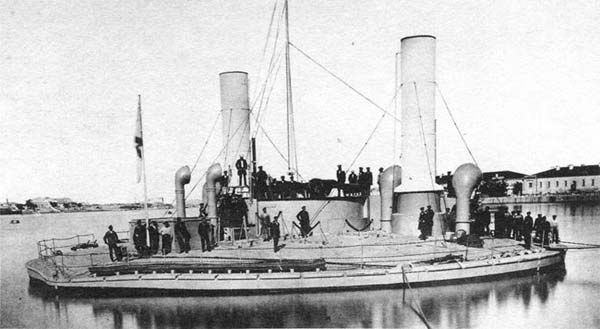 Throughout the 1860s, the Russian navy felt lost and more than a smidgen inadequate. The recent Peace of Paris in 1856, after their trouncing in the Crimean War, had banished Russian warships from the Black Sea, making much of the nation’s naval strategy obsolete and leaving Russia open to bellicosity from its southern neighbors in the Ottoman Empire. Meanwhile, the rise of monitors, first in America but then closer to home in Sweden, gave a shape to the fear that Russian technology was falling too far behind the curve to handle any future naval engagements. The Russian navy needed raw firepower, something so innovative in its brutality and strength that it could sit at the mouths of Russia’s rivers and utterly destroy any foreign notions of picking away at Russia via internal waterways.

Fortunately, the Czar had a man with a plan. Andrei Alexandrovich Popov, the newly minted rear admiral in charge of dry docks and ship design, had served in the Crimean War and knew well the existential fear his nation faced. In his search for answers, he became obsessed with a design being floated by the Glaswegian shipbuilder John Elder: circles. Circles would solve everything. Circular hulls, that is. In a fit of simple, geometric brilliance, Elder had pointed out—and Popov had readily internalized the fact—that a shallow, circular ship design would offer the greatest level of displacement on the water, allowing for the highest ratio of gun weight to ship area. As a bonus, the ship’s rounded edges would expose only slivers of the hull to direct fire at any point, deflecting the brunt of a shell’s impact and requiring minimal armor. Sitting low in the water, not much would be exposed anyway, so the small target’s large guns could rotate with ease in any direction and launch intimidating salvos from the Kerch Strait of the Dnieper River, mutilating any Turkish incursion into Russian waters. Popov ordered the construction of ten perfectly round ships, plated in metal armor and based on Swedish monitor designs, to create a solid blockade. In the end the ailing Russian treasury was only able to fund two: the Novgorod and the eponymous Admiral Popov. Commissioned in 1871 and launched in 1873, the two ships bore some subtle differences, but for the most part they shared the same design: 2,491 tons when empty, 30.8 meters in diameter, a 3.7 meter draught and 7-knot best speed, and a ring of armor 12 to 16 centimeters thick. Each sported two 26-ton 11-inch guns on revolving turntables, capable of moving independently or in unison, using wood wedges and hydraulic frictional compression devices to stabilize their fire. Aside from the big guns, each ship carried two 4-pound and sixteen 37 mm guns. Each ship ran on the power of six engines, each connected to its own propeller shaft—the engines and boiler took up half of the hull of the ships. They were truly imposing monstrosities.

Unfortunately they were green-lit with almost no testing. Popov offered a 24-foot model for inspection in the placid Neva River in 1870, but did not test the propulsion or gunnery on the toy ship. His sole intention was, single-mindedly, to demonstrate the visual allure, displacement potential, and novelty of the round hull.

The problem with a circle, though, is when one fires a shot with a massive gun, there’s something called centrifugal rotation. With no keel to cut and hold water, the lore goes, the first shots fired by the ships—nicknamed popovas after their inventor—sent them careening off wildly down the river. This dim view is overstated. While the first gunnery test revealed what should be deemed—at minimum—severe problems, coordination with the rudder and contra-rotation of the propellers helped to stop the ships from spinning off like tops in the field. However, the underlying problems of mobility could not be overcome. The rudder and propeller were undersized compared to the task of handling the unmoored disc, which rolled and pitched about in the waves of any river choppier than the Neva.

The result was poor aim, a 12-minute reload time, and a top speed less than half of that predicted by Popov and his acolytes. Not to mention that the designers had thought little of the crew, boiling in the poorly ventilated hull in the midst of brutal Ukrainian summers. Not even the compensations for the spin of the guns could salvage the round ship design.

Eventually the Peace of Paris lapsed and the Russian fleet moved back into the Black Sea, taking the fight on the offensive. In the next confrontation with the Turks, the popovas were taken to shore and anchored taut to prevent their spinning off. With too little endurance to make the trip across the waters to plot and fire at Turkey, they became defensive batteries never used in the conflict. After their failed service in the Danube Flotilla during the Russo-Turkish War of 1877-8, they were put into storage in 1893 and finally scrapped in 1912.

None of this was inevitable, nor was it the fault of the round ship design inherently. Even with news of the follies and failures of the popovas, British shipwrights continued to extoll the virtues of the round ship in naval conferences well into the 1870s, drawing lessons from Russia on how to overcome the mobility and stability issues of the shape. Popov and John Elder’s company (he died in 1869) even collaborated in 1879 to build the Czar’s new yacht, the Livadia, on the round ship design, elongating the stern and bow to help break the rotation of the ship, elegantly eliminating almost every flaw of the popovas.

The problem of the popovas was Popov and his obsession with a magic bullet solution to every problem of the Russian navy. His incessant belief in the power of fluid geometry (even after his brainchildren’s spectacular failure, he suggested building a larger ship with 16-inch guns that could reach 14 knots, but scrapped the idea when he realized he’d need five times normal horsepower to make it move) led him to ignore basic physics and easily intuited complications. And perhaps the design would have worked, if the money for ten had existed and the strategic importance of the Kerch Strait remained a constant for several decades. But the world is not ideal, strategic factors change, and while a circular peg may fit a circular hole, there are almost no such simple geometric equations to be filled in peace or war.

Mark Hay is a freelance writer and University of Oxford graduate student who works on political, material and strategic history.