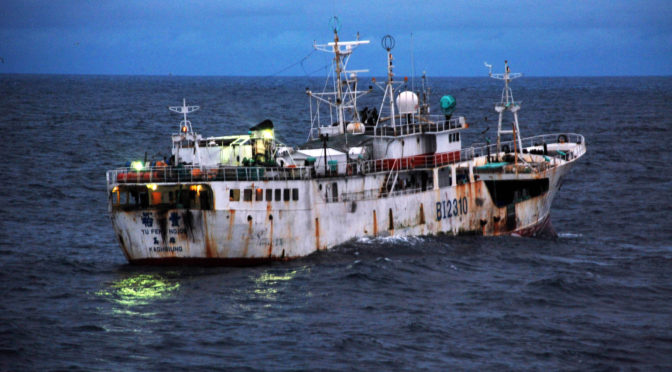 Illegal, unregulated, and unreported (IUU) fishing costs Asia billions of dollars a year and constitutes a third of the entire regional catch. It has strong links with sea slavery and unregulated migration – the Thai fishing fleet employs 50,000 foreigners annually, often criminally underpaid and held in poor conditions – along with other criminal enterprises, such as underage prostitution. Moreover, it leads to dramatic overfishing, damaging local economies and causing serious environmental damage. All countries in the region acknowledge it is a major issue with cross-cutting impacts, yet generally lack the capabilities to manage it.

It is typically conceptualized as a developmental or ocean governance challenge. But in fact it represents a remarkable strategic opportunity for the United States. The U.S. has struggled to contest China’s growing maritime insurgency in the South China Sea because its presence is relatively transient and China’s is not. The U.S. could make itself far more competitive in the region by contributing substantial resources to a multilateral maritime policing effort aimed at IUU fishing.

Such action would go a long way toward embedding the U.S. deeper into the region and supporting its strategy of a free and open Indo-Pacific. Instead of relatively short security cooperation exercises, U.S. personnel and assets would work shoulder-to-shoulder with regional partners for long periods of time, and make progress on an issue that readily impacts the quality of life of regional populations.

On a broader level, this policy could reshape perceptions of the U.S. and present China with difficult strategic decisions regarding maritime provocation. First, trust in U.S. foreign policy has declined precipitously under President Trump. Regional powers are concerned about the potential for America’s China policy to spark conflict and are dubious about the strength of Washington’s security guarantees. On the other hand, China has been making a bid for regional leadership, and while few countries see its actions as friendly, it is perceived as more influential and consistently present than a mercurial America. By deeply engaging in a multilateral, local-led mission against a systemic regional problem, the U.S. can substantiate its claims that it supports a free and open Indo-Pacific rather than be seen as destabilizing and high-handed. Moreover, as Chinese vessels are major contributors to IUU fishing, strong U.S. action against the practice would highlight the U.S. as upholding beneficial norms in sharp contrast to an aggressively self-interested China.

It would also cause China tactical heartburn. Chinese vessels routinely ram and dangerously approach ships from other countries but are more circumspect around U.S. ships for fear of escalation. If U.S. service personnel were routinely embedded on coast guard and naval ships from other nations, this level of circumspection would likely expand. In turn, this would provide regional navies more space to maneuver and assert their legitimate claims – evening out the maritime playing field and positioning the U.S. to be more responsive to the competition occurring below the threshold of open conflict.

However, the U.S. Navy must confront the reality of stagnating defense budgets and growing operational demands. Chronic overwork has already led to disaster in the 7th Fleet, and adding more taskings without substantial additional resources is not viable. Luckily, this program could be achieved at relatively low cost by utilizing assets not traditionally employed for national security. For example, IUU fishing is highly dependent on immigrant labor, with recruiters often trapping poor farmers in debt bondage. The State Department could assist international NGOs in targeting this practice. Experts from the U.S. Treasury Department and USAID could work with host nations on countering corruption in port authorities. Satellite radar data is becoming more affordable and proven to be effective in finding fishing vessels that turn off their transponders. There are some specialized capabilities which would certainly require additional investment. Sustainable training and embedding with partner navies could only realistically be done by the U.S. military. But innovative approaches that leverage the interagency can cut costs.

This policy is not without risks. Three clear issues would require action. First, it would expose U.S. personnel to greater threats. While embedding U.S. personnel on regional vessels might spur caution in Beijing, it is all too plausible to imagine a Chinese maritime militia or coast guard ship ramming a Vietnamese or Filipino vessel – only to inadvertently injure or even kill an embedded U.S. servicemember. Finding the right balance between earning the desired deterrent effect and having adequate force protection would be a challenge.

Second, it could feed into perceptions of U.S. hypocrisy or imperialism. IUU fishing is a major problem, but few countries appreciate meddling. The mission would require effective strategic communications and operating methods to emphasize a local-led, partnered approach. A particular wrinkle would be Japan, which is a major destination market for illegally caught fish. Challenging Japan on this issue might create tensions with a key ally, but failing to do so would invite accusations of hypocrisy. Designing the policy from the start with consultation from partners like Japan would be key to mitigating such challenges.

Third, while China is the biggest perpetrator of IUU fishing, it is far from being the only one. Many disputes over fishing grounds and regulation are between U.S. partners. That adds diplomatic nuance to assistance programs and would demand major efforts to resolve. Drawing on experience and trust earned through existing partnered operations would be vital. If the U.S. can leverage diplomacy to help resolve fishing disputes amongst its partners then it would make further progress on the issue and draw a sharper contrast with China’s behavior.

Another diplomatic wrinkle is the fate of boats and fishermen engaged in IUU fishing across international lines. Those arrested are often without papers, which makes deportation difficult, but governments are leery about detaining large numbers of foreigners for long periods of time. Aside from the humanitarian implications, it is a trigger point for international disputes. The U.S. could use its convening power to propose international courts and institutions to address such concerns, and perhaps draw inspiration from the Courts of Mixed Commission which helped suppress the trans-Atlantic slave trade.

Matthew Ader is a student in the Department of War Studies at King’s College London. He is an associate editor at the Wavell Room, and tweets infrequently from @AderMatthew.

One thought on “Fight Illegal Fishing for Great Power Advantage”