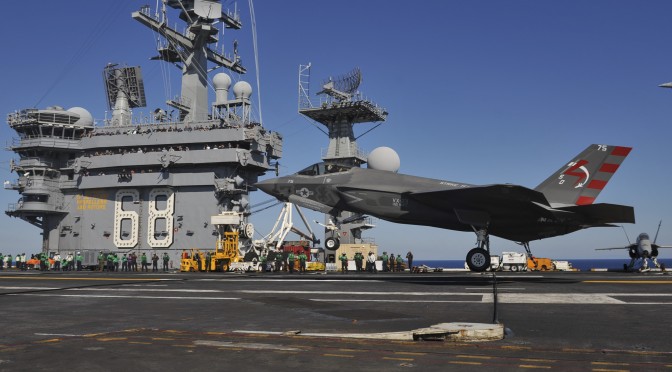 Fair warning: what follows is commentary about the F-35. However, this isn’t going to be a very popular commentary, as it doesn’t follow suit with the endless stream of recent articles, opinions, and blog posts making the F-35 out to be the worst debacle in the history of the militaries of the world. On top of those you’d expect, even automotive and IT blogs have piled on.

People who have no idea how government acquisition works, nor the purpose of the Joint Strike Fighter program — or even some who do, among many with ideological axes to grind — relish trashing the F-35, always managing to include “trillion dollar” (or more) somewhere in the title of the latest article to lambast the plane.

The F-35 is a multirole fighter that is designed to replace nearly every fighter in not just the Air Force inventory, but the Navy and Marine Corps as well: the F-16, F/A-18, AV-8B, and A-10, and to augment and partially replace the F-15 and F-22. The F-35 lifetime cost will be less than that of all the diverse platforms it is replacing — and their own eventually needed replacements.

China devoted significant national espionage resources to stealing everything they could about the F-35, and implementing much of what they stole in the J-31/F-60 and J-20, China’s own next-generation multipurpose stealth fighters. This theft added years of delays and hundreds of millions of additional redesign dollars to F-35 development.

If anything, the F-35 suffers from being a “jack of all trades, master of none” — which is itself a bit of an overstatement — but we also can’t afford the alternative of follow-on replacement for all existing platforms. And for all the delays, we still have aircraft in the inventory to serve our needs for the next 10-20 years. Articles oversimplifying sensor deficiencies in the first generation, software issues with its 25mm cannon (the gun remains on schedule), or the oft-quoted 2008 RAND report, apparently choose overlook the reality that it’s not going to be instantaneously better in every respect than every aircraft it is replacing, and may never replace aircraft like the A-10 for close air support.

The F-35 development process is no more disorganized than any other USG activity, and if you want to look for people protecting special interests, it’s not with the F-35 — ironically, it’s with those protecting all of the myriad legacy platforms, and all of the countless different contractors and interests involved with not just the aircraft, but all of the subsystems made by even more contractors, all of whom want to protect their interests, and which are served quite well by a non-stop stream of articles and slickly-produced videos slamming the F-35.

NASA’s James Webb Space Telescope was originally to cost $500 million, and is now expected to cost $8.8 billion and will be over a decade late. Shall we cancel it? Or take the pragmatic approach when the purpose of the mission is important and no reasonable alternatives exist? This isn’t a problem with just DOD acquisition. It’s the reality in which we live.

One of the reasons the JSF program, and the F-35, came into being is precisely because we won’t be able to afford maintaining and creating replacements for a half-dozen or more disparate aircraft tailor-made for specific services and missions.

The F-35 itself is actually three different aircraft built around the same basic airframe, engine, and systems. The F-35A is the Air Force air attack variant, the F-35B is the VSTOL Marine Corps variant, and the F-35C is the Navy carrier-based variant. If we had already retired every plane the F-35 is supposed to be replacing, there might be cause for concern. But as it stands, we have retired none, and won’t until the F-35 can begin to act in their stead.

The A-10, for instance, has found new life over the last 12 years in close air support roles, primarily in Iraq and Afghanistan, and is often held out as an either/or proposition against the F-35. No one ever claimed that the F-35 was a drop-in replacement for an aircraft like the A-10, and no one could have predicted the success the A-10 would again find in environments not envisioned when the JSF program came into being — though some of this success is overstated, claims otherwise notwithstanding. The Air Force is faced with difficult resource prioritization choices; if the A-10 is that critical, keep it. The debate on the future of CAS isn’t dead.

If there are questions as to why we even need a fifth-generation manned multirole fighter with the rise of unmanned systems, cyber, and so on, the answer is an easy one: China and Russia both developed fifth-generation fighters, and the purpose of these aircraft isn’t only in a direct war between the US and either of those nations, but for US or allied military activity in a fight with any other nation using Chinese or Russian military equipment, or being protected by China or Russia. You don’t bring a knife to a gun fight.

The F-35 isn’t just a US platform: it will also be used by the UK, Canada, Australia, Italy, the Netherlands, Denmark, Norway, Israel, Turkey, Singapore, and perhaps other nations. And the fact is, this is not only our fifth-generation manned fighter, it is likely the last. We cannot afford to have separate systems replace all or even most of the platforms the F-35 is replacing, nor can we simply decide to forgo replacements and extend the life of existing platforms by decades.

The F-35 is our nation’s next generation fighter, and it’s here to stay.

Dave Schroeder serves as an Information Warfare Officer in the US Navy, and as a tech geek at the University of Wisconsin—Madison. He holds a master’s degree in Information Warfare, and is a graduate of the Naval Postgraduate School (NPS). He also manages the Navy IDC Self Synchronization effort. When not defending the F-35, he enjoys arguing on the internet. Follow @daveschroeder and @IDCsync.