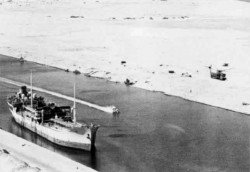 Fatal attacks on the Suez Canal, one of the world’s central trade routes by sea, have long been a mere theoretical possibility. This changed with the attack on the “Cosco Asia” on 31 August 2013. The attack is a result of political instability in Egypt, leaving the Sinai Peninsula a lawless zone for jihadists and Bedouin militias. In response, the Egyptian armed forces launched a brutal anti-terrorism campaign in the northern Sinai. However, purely military measures could prove insufficient.

The Suez Canal is one of the most militarized zones in the world due to its strategic importance, reflected in the Suez Crisis in 1956 and its closure from 1967–1975 during the Arab-Israeli wars. The passage through the Red Sea, the Suez Canal and the Strait of Bab el-Mandeb is considered to be the second most important waterway for global oil trade after the Strait of Hormuz. A blockade of the Suez Canal could have disastrous effects on the world economy. The canal, built by the British and in operation since 1869, is controlled by an extensive security system under supervision of the Suez Canal Authority (SCA). The SCA employs vessel data registration, radar surveillance, signal stations, camera surveillance and a signal-based automatic identification system. Egypt’s armed forces are responsible for its security, having an estimated five divisions deployed with the Second Army responsible for the Port Said-area from the Mediterranean Sea to the north and the Third Army responsible from Ismailiya to the Red Sea to the south.

Attack on the Canal

Yet the Cosco Asia attack exposed its vulnerabilities – primarily because the geographic 120-mile stretch between Port Said and Suez is hard to control, enabling militant groups to mount land-based attacks in narrow passages. On 31 August 2013, a group calling itself “Al-Furqan Brigade” claimed responsibility for an RPG (rocket-propelled grenade) attack on the Cosco Asia, a Chinese-owned container ship under Panamanian flag with 10,000t of cargo on its way to Northern Europe. The attack did not cause much harm. The bullet only struck a container containing an illegal delivery of cigarettes belonging to Irish smugglers. If such terrorist groups are able to cause a ship to sink in a narrow passage of the canal, the authorities would be forced to stop canal traffic and remove the ship. Yet an incident of this magnitude seems highly unlikely since it would take a large-scale operation to sink a robust ship. Thanks to the comprehensive surveillance system in the canal zone, Egyptian security forces can quickly respond to major incidents. Larger operations would therefore be very difficult for terrorist groups to carry out.

An attack on the Suez Canal could cause a devastating disruption of maritime trade. It is less real danger, but more the possibility of such attacks that creates anxiety among Egyptian authorities and international shippers. There are reasons to remain cautious in the future. After the downfall of President Hosni Mubarak on 11 February 2011, Mohammed Morsi of the Muslim Brotherhood was elected President of Egypt on 30 June 2012; Morsi in turn was later ousted on 3 July 2013. In Egypt after Mubarak, the constitution is disputed, the military establishment continues to dominate and Islamists are increasingly confronting the state authority. Egypt’s security policy in Sinai is becoming a key challenge. On 17 July 2013, the Associated Press reported, based on a series of interviews with military sources, that Morsi had been at odds with General Abdel Fattah el-Sisi for several months, the man whom Morsi had promoted from Head of Military Intelligence Services to Defense Minister and Head of the Armed Forces in August 2012. According to a former general the security situation in the Sinai was the main source of disagreement. According to military sources, but also leading Islamist figures who reject the use of violence as a tactic, Morsi was collaborating with armed extremist groups in the Sinai. El-Sissi believed that insecurity in Sinai was a threat to Egypt’s state security and used this as the reason to topple Morsi from the presidency.

The 23,500 mile²-large peninsula has been a buffer zone between Israel and Egypt since the peace treaty of 1979. Only limited military forces are allowed to operate and multinational armed forces (MFO) are stationed to ensure accordance with the peace treaty. The population of around 400,000 people consists to three quarters of Bedouins, the rest Palestinians, Egyptian immigrants and descendants of the settlers from the Ottoman period. Egypt has largely neglected Sinai and its inhabitants, many of whom do not have Egyptian citizenship, keeping public investments and military presence low. The Egyptian army never deployed more than 70-80 percent of the 22,000 soldiers allowed by the Camp David Agreements in Zone A of the Western Sinai. Nor had it opened headquarters or trained troops for combat in desert terrain. After Mubarak’s downfall, jihadist groups became more active, supported by increasingly dissatisfied Bedouins. The long marginalized tribal Sinai Bedouins have since become a semi-autonomous player. Egypt could no longer neglect the Sinai Peninsula, considering increasing terror activities of Hamas, Palestinian Islamic Jihad, Al-Qaeda or Bedouins who joined Salafi-jihadist groups. After the uprisings in the Arab world, illicit smuggling of people and weapons from Algeria and Libya increased. Al Qaeda in the Islamic Maghreb (AQIM) welcomed hundreds of Sinai-based militants to Libya for training and cooperation. A strong Hamas network has been smuggling weapons both from and into Gaza, coming from Iran through Sudan and Egypt. Hamas employs secret storage sites throughout the Sinai, including long-range missiles, explosives workshops, rockets and mortars. It is estimated by local sources that a total of 100,000 weapons of all kinds and an illicit trade amounting to roughly $300 million exist in the Sinai.

Uprising and Open Confrontation of the State Authority

After Mubarak’s fall, Sinai experienced a quasi-insurgency with more than 200 attacks in five months, including rocket attacks on military targets and gas pipelines as well as armed robberies using trucks and motorcycles. Egypt’s armed forces launched Operation Eagle in August 2011 to address increasing lawlessness, mainly in the north of Sinai. On 19 August 2013, 25 Egyptian policemen were killed in an ambush in Rafah. The attackers fired RPGs on their convoy to stop it, before removing and then executing the passengers openly in the street. After Morsi’s ouster, violent attacks peaked between 1 and 28 July 2013, when 250 attacks were tracked. As a reaction, the armed forces started Operation Desert Storm on 27 July, deploying 20,000 soldiers supported by US-supplied Apache combat helicopters. This meant Egypt’s largest mobilization since the Yom Kippur war in 1973. Egypt’s security forces killed and detained militants from Libya, the Palestinian Territories, the North Caucasus, Saudi Arabia, Syria and Yemen. The frequency of attacks dropped in the months that followed. The inhabitants of the Sinai bemoan indiscriminate destruction of their homes, enormous brutality of the Egyptian army against suspects and their stigmatization as “terrorists.” Many young Bedouins have joined jihadist groups. Al Qaeda, Hamas and many other groups are in open confrontation with the Egyptian state with increasing support of the locals, who are loosing confidence in the state. On November 20, a Salafi-jihadist group attacked a convoy of buses with Egyptian security personnel in the northern Sinai, killing 11 and wounding 35 – the bloodiest attack since July but the last of this size. It seems the military was successful in curbing attacks which went down from 104 in July, to 40, 31 and 22 in August, September and October. During the counter-terrorism campaign, the Egyptian armed forces recognized that the Rafah tunnels at the 9 miles-border to Gaza are a key security challenge. Since August 2012, the military targeted the tunnel networks, bombing and flooding them. In July, the estimates of operating tunnels ranged between 100 and 300, while in September, only ten remained. However, the bombardments on the tunnels to Gaza will lead to further economic losses and deprive even more people of their livelihood.

This will not calm Sinai’s inhabitants, who may find more reasons to confront the Egyptian state. More unrest and terrorist attacks against civilians, military targets or the Suez Canal can be expected. The confrontation may become even more intense after Al Qaeda veterans’ call for arms against the Egyptian army. On September 5, the Sunni-jihadist group Jamaat Ansar Bayt al-Maqdis used an improvised explosive device (IED) placed in a car with 50 kilograms of explosives to target the interior minister Mohamed Ibrahim’s convoy in Nasr City, Cairo, injuring 22. More such IEDs have been found on the main Cairo-Suez road, indicating that the wave of violence increasingly affects the mainland. After Morsi’s ouster, regular protests and attacks on military targets took place in the Suez Canal port cities, Suez, Ismailia and Port Said. Lloyd‘s List, a marine insurance company, reported increased military activity and ship inspections in the canal. Lloyd‘s recommended ships take the 6000 mile-longer route around the Cape of Good Hope instead. This wave of terror might only be the beginning. If the security situation in Egypt is not improved, the Suez Canal passage would be considered to be even more dangerous in the future, increasing risk premiums for shipping and causing the Egyptian economy to suffer further. It cannot be ruled out that the North Sea route will become more attractive for international shipping in the future.

In spite of the recent successes by the Egyptian armed forces’ counter-terrorism campaign, the breeding ground for jihadists in the Sinai Peninsula remains a challenge for Egypt, forcing it to look beyond the military dimension and instead focus on governing Sinai and addressing local grievances in the long run.

Niklas Anzinger is a Graduate Assistant at the Maxwell School of Citizenship and Public Affairs in Syracuse, NY. This post appeared in it’s original form and was cross-posted by permission from our partner site Offiziere.ch.

7 thoughts on “Is Egypt’s Instability a Threat to the Suez Canal?”