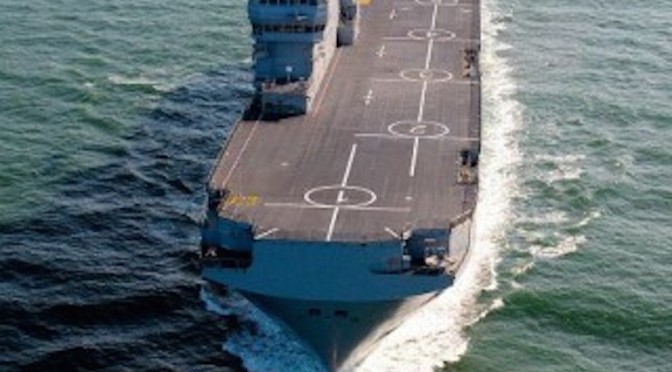 The protracted “What happens to France’s two unwanted Mistrals” saga has seemingly drawn to a close with the agreement by Egypt late last month to acquire the highly capable amphibious assault ships (LHDs) for a total of €950 million. A number of commentators have argued that the rationale behind this eyebrow-raising decision is for Egypt to attain a maritime power-projection capability so as to hedge against rising Islamist violence in the region and a resurgent Iran. Indeed, one prominent defense journalist wrote of Egypt using the French-made Mistrals to quell trouble in neighboring hot-spots. In the same vein, another commentator spoke of the vessels giving their owners the ability to conduct expeditionary missions with significant ground and aerial assets.

That being said, the aforementioned statements are based on the assumption that Cairo would be able to effectively deploy the two ships in the first place. This is highly contentious, at least in the near term, for a number of reasons. They include Egypt’s dearth of experience in large amphibious-vessel and naval aviation operations, among others.

Defense analysts often speak of the Mistral in glowing terms. Indeed, much has been made of the platform offering almost the same capabilities as the United States Navy’s potent Wasp-class LHD, but at only one-sixth the cost and crew size. And even though France officially calls the Mistral a bâtiments de projection et de commandement, or “projection and command ship,” it can also perform several other roles such as amphibious/heliborne assault and humanitarian

assistance and disaster relief. With 69 beds for patients, it can even act as a hospital ship. An important component of the Mistral is its air wing, which consists either of 16 heavy or 35 light helicopters. It can also accommodate 450 troops (900 for surge operations), four small landing craft or two hovercraft, and a 40-strong Leclerc main battle tank (MBT) unit.

In recent years, France has put its Mistrals to good use in support of its foreign policy. For instance, during the 2006 Lebanon War, the lead ship of its class, the Mistral, was involved in the evacuation of French citizens from the Levant nation. Two years later, the same vessel provided humanitarian aid supplies, albeit indirectly, to victims of Cyclone Nargis in Myanmar. And in 2011, the Tonnerre was deployed with Tigre helicopter gunships off the Libyan coast to support France’s military intervention in that North African country.

At first glance, therefore, the introduction of the Mistral into Egypt’s order of battle would seem to boost considerably the latter’s expeditionary capabilities. However, a more critical assessment  reveals that this would not be the case. Firstly, Egypt simply lacks the experience and know-how in handling a vessel like the Mistral. Warships are highly intricate technological entities. As cited in Seapower: A Guide for the Twenty-first Century (Routledge, 2013):

To… operate [warships] requires a mass of technical, industrial and professional skills, ashore and afloat, and a sophisticated system of management to mold them into an effective whole… Ships can be constructed relatively quickly, but the skills and capabilities which make up an effective navy can only be built up with long years of investment.

Indeed, Cairo’s experience in handling warships is limited warships significantly smaller than Mistral. The Egyptian military’s current largest amphibians are its three Polnochnys. This Polish-made landing ship is some 70 meters long and displaces 830 tons; in stark contrast, the corresponding figures for the Mistral are 200 meters and 21,000 tons. Furthermore, the mainstays of the Egyptian surface fleet – the formerly Knox- and Perry-class frigates procured from the U.S. Navy ­– are around 4,000 tons in displacement. Even the largest warship currently in Egyptian service is nowhere near the specifications of the Mistral. Egypt’s sole FREMM frigate, which is 140 meters long and displaces 6,000 tons, was commissioned into service only in June this year.

This dearth of experience in operating a large and complex multi-purpose naval platform like the Mistral would arguably be exacerbated by a failing that plagues most Arab militaries: their personnel’s deficiency in terms of technical skills. In Arabs at War: Military Effectiveness, 1948-1991 (University of Nebraska Press, 2004) Kenneth M. Pollack maintains that Arab armed forces, including Egypt’s, often show an inability to fully exploit the capabilities of the military hardware they possess. The Middle East defense expert adds that this lack of technical skills and other military weaknesses of the Arabs are likely to persist.

Then again, even First-World countries with highly educated citizens who are familiar with advanced technology can struggle with regard to operating LHDs. The time-frame in which Australia hopes that HMAS Canberra will achieve initial operational capability (IOC) and final operational capability (FOC) is illuminative of the challenges Egypt might face with its Mistrals. The Canberra – the lead ship of a new LHD class – was commissioned last November, and Australia is working towards its IOC and FOC to be attained in late 2015 and late 2017 respectively. In other words, Australia is hoping that HMAS Canberra will only be fully deployable a good three years after its commissioning.

That being said, media reports state the Mistrals will be delivered to Egypt in March next year and that their future crews have already begun training. To be certain, nobody will claim that Cairo could get its LHDs up and running within a meager six months. However, Egypt’s technical deficiency means that it could take a longer than than Australia to achieve operational capability with their LHD platforms. Furthermore, it must be noted that the Royal Australian Navy possesses some institutional knowledge in handling flat-tops, having operated light carriers during the Cold War. In stark contrast, Egyptian expertise in this area is essentially zilch. The crew of the two Mistrals will therefore need significant assistance from France and also Russia, as there are several Russian systems on-board the vessels.

A key mission the Mistral is expected to carry out is amphibious operations, and specialist skills and training are essential to the success of such endeavors, according to esteemed naval commentator Geoffrey Till.  Though Egypt has a small marine force, a Stratfor analysis suggests it is not proficient enough to deploy optimally from the Mistral. This particular report, however, does

not differentiate between the scales of amphibious operations to be conducted. Does it apply for large- or small-scale landings? It is certainly true that Cairo lacks experience in major amphibious operations. As a matter of fact, a Jane’s report argues that the Egyptian military cannot conduct “unilateral, opposed beach landings”, adding that it can only perform small-scale amphibious operations such as infiltrating special forces teams. Such an assessment is hardly surprising considering the fact the Polnochny landing craft can carry a maximum of 180 soldiers and six MBTs, while the Egyptian navy’s other amphibious asset, the Vydra landing craft of which it has nine, can deploy only 100 troops or three MBTs.

However, the Mistral is not built solely for major troop landings, but a range of missions scalable for different objectives. Indeed, Middle East security expert Ahmed S. Hashim believes that the platform would be used extensively for special forces ­­missions to combat Islamist extremism in the region. Such small-scale operations usually involve helicopters, but Egypt does not have the requisite experience vis-à-vis missions of this nature that are launched from ships at sea.

This shortfall is manifested in the fact that Egypt’s sea-based aviation experience consists merely of operating an anti-submarine warfare helicopter or two from each of its formerly Perry- and Knox-class frigates. To be sure, the flight-deck and hangar-bay choreography on helicopter carriers like the Mistral is not as complex as that on regular flat-tops. That being said, operations involving several ship-borne helicopters – the Mistral has six launch spots on its flight deck for them ­– are nevertheless challenging, even more so for a navy with limited experience in sea-based aviation like

Egypt’s. To compound matters, the Arab nation will have to train the crew for the navalized Ka-52K helicopters – an asset currently not in its order of battle – which could be procured for deployment on the Mistrals.

Finally, the Egyptians do not have any experience organizing their warships into task forces centered on a capital unit like the Mistral. The LHD makes for an inviting target for adversaries and hence has to be screened by consorts such as frigates and other surface craft as part of a task force. Having a fully operational entity of this sort, however, requires the Egyptians to imbibe the intricacies of maritime task force operations, and this would involve learning from scratch the doctrinal and technical expertise critical to such endeavors. For instance, each component of such a task force will have to train and operate together so as to improve their ability to fight as a coherent whole.

Much has been said about the uphill task the People’s Liberation Army-Navy, which had no experience with flat-tops prior to the commissioning of the Liaoning, is facing in creating a viable aircraft carrier battle group, and the consensus is that this could become a possibility only after several years of concerted effort. The same goes for any Egyptian Mistral task force becoming an effective fighting force. The Egyptian fleet’s lack of operational experience as a whole further complicates the issue. Indeed, it was only tangentially involved in the various Middle Eastern conflicts during the Cold War. In the post-Cold War period, Egyptian warships have been largely placed in the back-burner and have not even joined international peacekeeping missions.

Rounding up, Egypt’s acquisition of the Mistral seems to mark a quantum leap in its capacity to project force; the platform offers multiple capabilities previously unavailable to Cairo. Nonetheless, Egypt is unlikely to utilize the Mistral optimally because of its lack of experience in such crucial areas like handling such a sizable and complex vessel, ship-borne helicopter operations, and integrated naval task force maneuvers. With these in mind, it would be an extremely steep learning curve for Egypt vis-à-vis her most ambitious naval acquisition so far. While most nations, including advanced ones, also struggle with regard to adopting new military technology, Egypt’s case is especially pronounced considering its people’s general lack of technical proficiency.

Going forward, there has been talk of the Egyptian Mistrals operating with Saudi units as part of a joint Arab force; after all, Saudi money is believed to be behind the procurement of these platforms. However, “jointness” is difficult to achieve even between the service arms of a particular country, let alone with another country. Such an arrangement, if it ever materializes, is likely to further complicate Egyptian Mistral operations.

In the final analysis, it is worth noting that countries that are able to operate effectively aviation-capable platforms like the Mistral belong at least to the category of nations regarded as “medium powers”. Think Japan with its Izumo-class “helicopter destroyers” and South Korea with its Dokdos. This invariably raises the following question: was the Egyptian Mistral acquisition grounded in operational realities, or was it an vainglorious decision conditioned by the fact that large amphibious warfare ships are so du jour nowadays? During the Second World War, there was a famous saying in Japanese naval circles that went: “The three great follies of the world are the Great Wall of China, the Pyramids and the battleship Yamato.” In the near future, could this statement be modified to include the Mistral? Based on the current state of affairs, it is highly probable.

Ben Ho Wan Beng is a Senior Analyst with the Military Studies Programme at Singapore’s S. Rajaratnam School of International Studies; he obtained his master’s degree in strategic studies from the same institution. He would like to express his heartfelt gratitude to colleague Colin Koh Swee Lean for providing his insights on this article. Ben can be reached at iswbho@ntu.edu.sg.

2 thoughts on “Egypt’s Acquisition of the Mistral Amphibious Assault Ship: An Operational Analysis”