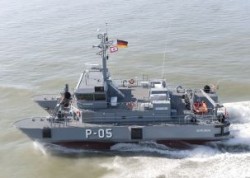 Crossing the Baltic Sea recently from Gdynia to Karlskrona, both major naval bases, I had the opportunity to observe ships of both the Polish and Swedish navies. By coincidence, I had just finished reading Tom Kristiansen and Rolf Hobson book Navies in Northern Waters. I began to wonder how a big navy could benefit by observing these small fleets. Smaller navies commonly  look at their big partners in efforts to predict future trends and developments.

Small navies should be aware that they operate on the edges of major naval war theories like those developed by Mahan or Corbett. Such theories were based on the historical experience of leading navies at their times. Although it is possible to imagine a “decisive battle” between offshore patrol vessels (OPVs) or fast-attack craft (FACs) (see Israeli-Arab wars), most probably small powers and their navies will balance between global or regional powers, allied with one of them against another or left alone against superior power. From a cooperative naval power point of view they could nicely fulfil diplomatic or constabulary roles. But there are also other areas worth mentioning, where small navies’ views, development, and operational experience could be of interest to leading navies. Studying small navies provides: