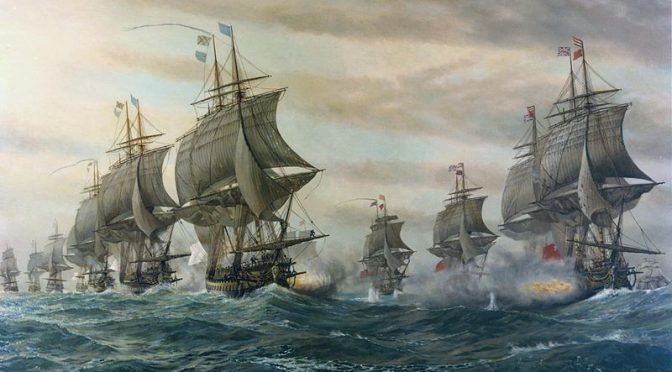 Cheaper, deadlier A2/AD weapons make a strong Navy a necessity, not a luxury.

The broad reasons for having a strong Navy remain the same as in past generations: the Navy protects U.S. trade; projects power from our isolated continent; and through ship deployments and port calls, adds weight to our diplomatic efforts. While these missions remain constant, the nature of piracy and area denial will evolve rapidly: weapons are becoming more capable and widespread, and the rise of unmanned ships will shift the focus of piracy and blockades from crews to cargo and hulls. If the U.S. intends to maintain open trade and a peaceful world order, it will need a Navy prepared to confront these changes.

On October 1 2016, the former HSV-2 Swift was hit and nearly sunk off Yemen by an anti-ship missile fired by Houthi rebels. Though the actions of a U.S. task force, led by the USS Mason and USS Ponce, over the following month prevented the rebels from blocking the passage, it ended up exchanging further fire with the Houthi three different times. While this particular incident ended well, the mere fact that a non-state actor had the resources, training, and will to use anti-ship cruise missiles to try and block a vital strait represents a shift in naval warfare.

While those particular missiles were likely provided by Iran, other, more threatening weapons are available on the free market. For example, a major Russian arms manufacturer offers the Club-K missile system: a matched set of four Kalibr anti-ship cruise missiles, a modern and widely used design, ready to launch in a standard 40-foot shipping container. This class of weapons can allow their users to threaten major surface vessels for as little as $10-20 million.

These types of deadlier, cheaper, and more independent weapons are the future of anti-access/area denial (A2/AD) technology. Once limited to great powers, serious area denial capability will soon be open to any minor power with ready cash. These new actors need not even invest in extensive systems; using a few Club-K-like systems hidden among more mundane shipping, they would be able to threaten wide areas with relatively few actual weapons.

The intelligence needed to target these weapons effectively is also growing more widespread. Since detailed and up-to-date shipping information, based on public AIS data, can be pulled from the internet, initial-stage targeting is a relatively simple matter. Additionally, firms like IHS Jane’s track military deployments and provide detailed analysis of satellite imagery to their customers. As launch prices drop below $1000 per pound and electronics further shrink, satellites are likely to become even more open to small actors. The French Spirale system, for example, recently demonstrated a ballistic missile detection network with only two 120 kg orbiters. As launch technology continues to mature, led by private firms like SpaceX and Blue Origins, it is only a matter of time before satellite surveillance networks come within the reach of small nations and powerful non-state actors.

In other words, the resource threshold to blockade or interfere with sea lanes is going down. Weapons are becoming cheaper, better hidden, and less dependent on a large infrastructure. The required intelligence is cheaper, and in many cases, freely available. This evolution comes at a particularly bad time, as sea lanes are becoming both more vital and more vulnerable.

The long-term, multi-century shift towards globalization continues relatively unabated. In the year 1600, the entire annual sum of trade between Scandinavia and the Baltic region was about 90,000 tons, spread out over a thousand freighters; in 1940, moving that same mass of cargo required only nine Liberty Ships, while today, the same amount of goods would barely half-fill a Chinamax.

It is worth addressing, while protectionism and insularity are popular buzzwords, they don’t reflect a realistic long-term approach. With the unique exception of North Korea, economic insularity has always proven temporary throughout history. The global economy is not shaped like a chain, but a spiderweb; trade will continue organically even if individual nations are removed from the network.

As resources move over the sea, they naturally tend to travel through dangerous areas, because of cost and time concerns. Shipping routes have always been dictated by geography; this is why Iran could threaten fuel routes during the Tanker Wars in the 1980s, why Somali pirates have been such a priority, and why control of the First Island Chain is such a concern for China and its competitors. The future will be no different. Whether the waters off the Middle East, or unstable portions of East Asia and Central America, the most popular sea lanes and bottlenecks are in the most dangerous areas of the world.

Unlike in the past, though, freighters of the future may have no crew to protect the ship or to be ransomed. Though automated container ships may seem far off, building drone or autonomous ships is simpler and cheaper than self-driving cars. While the unmanned ships will have to deal with the same problems, like corrosion and storms, that mariners have always confronted, the sea is an environment with few of the obstacles, such as pedestrians and speeding neighbors, that make land vehicles so difficult to automate. This will lead to a different model of piracy and blockades. With no crew to capture or ransom, there will be less incentive not to simply liquidate cargoes or destroy vessels.

Globalization will only continue in the long-run, sending more riches over the sea. Shipping lanes will take the same dangerous courses they always have, and ships will have no crew to protect them. While the potential reward to blockading or interfering with sea lanes will go up, the fact that drone ships have no crew to endanger will vastly simplify the process of doing so.

Up until now, commerce raiding (or its illegal twin, piracy) had to be one of three things: 1) limited in scope, like Confederate raiders or the Emden; 2) coastal, as in Somalia or Indonesia; or 3) carefully targeted, like the English hunts for Spanish treasure galleons. Proper blockades could only be accomplished by major powers with large, professional navies. In the near future, that will no longer be the case.

Any nation, from North Korea to South Sudan, will have the resources to institute an effective blockade; if Yemen is any example, even rebels and non-state actors could have power over sea lanes. However, these small A2/AD forces will always have fewer resources than the peer-level A2/AD we face in Russia and China. As the USS Ponce and USS Mason proved in October, U.S. task forces can defeat them. However, if current trends of fleet readiness and ship numbers continue, that edge will not last long; we will simply run out of ships to send. If we intend to maintain superiority, the U.S. will need to be deliberate about building a better Navy, soon.

Chris Rielage is an incoming midshipman at Stanford University.