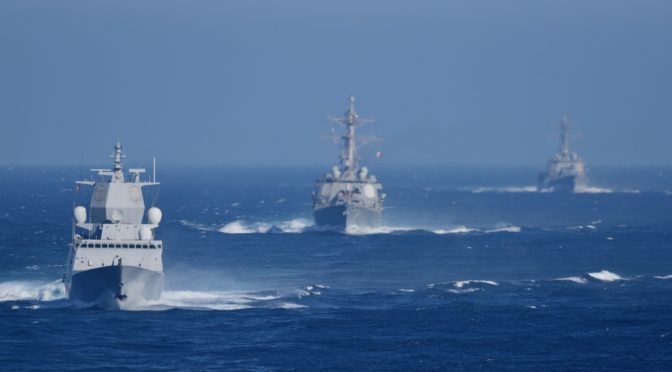 By David Wallsh and Eleanore Douglas

Chief of Naval Operations (CNO) Admiral Gilday’s December 2019 Fragmentary Order (FRAGO), “Design for Maintaining Maritime Superiority,” emphasizes the importance of building alliances and partnerships to enhance U.S. warfighting capability, with a particular focus on “full interoperability at the high end of naval warfare.” This objective is critical—Washington’s ability to credibly threaten combined warfare across the full range of the competition to conflict spectrum enhances its ability to deter war and improves its ability to win if forced to fight one.

The U.S. Navy’s Cooperative Deployment Program (CDP), a framework for integrating partner nation (PN) navy units into deploying U.S. Navy strike groups, offers a particularly valuable instrument for advancing this goal. The Navy has many security cooperation tools for advancing interoperability, to be sure, but there is little substitute for months-long, real-world deployments. The Navy should therefore think creatively about how best to adapt this pre-2018 National Defense Strategy (NDS) program to the demands of the era of great power competition.

Deploying for the High-End Fight

The Royal Danish Navy (RDN) frigate HDMS Peter Willemoes’ 2017 cooperative deployment with the USS George H.W. Bush Carrier Strike Group (GHWBCSG) provides an illustrative example. The Willemoes deployed with the GHWBCSG in the U.S. 5th and 6th fleet areas of operation (AO) from February to May 2017, but integration efforts began much earlier. Beginning in early 2016, RDN personnel participated in staff talks, the GHWBCSG commander’s conference, and synthetic training. In December 2016, the Willemoes physically participated in the GHWBCSG’s pre-deployment composite training exercise (COMPTUEX). Willemoes commanding officer (CO) Commander Bo Overgaard later concluded, “Looking back at the start of the deployment…What we, the Royal Danish Navy, have learned and gained from being part of [GHWBCSG] most likely could not have been achieved anywhere else.”

Cooperative deployments such as that of the Willemoes are ideally suited to advancing the CNO’s vision of full interoperability for high end warfare, but the Navy should not lose sight of the value of providing partners with opportunities for smaller-scale integrated deployments. Indeed, CNO Gilday’s FRAGO also reminds us that, “Though we are not exchanging fire with our competitors, we are battling for influence and positional advantage today.” The CDP thus derives considerable value from its scalability. In late 2018, for example, the forward-deployed Ronald Reagan CSG conducted multiple weeklong mid-deployment integrations with Japan Maritime Self Defense Force (JMSDF) warships, including with the destroyer JS Kirasame in October and with the helicopter destroyer JS Hyuga one month later.

These are only a few examples of the ways in which the CDP provides essential value for advancing the CNO’s recent warfighting guidance. Cooperative deployments, if pursued strategically, are uniquely capable of preparing the Navy for the fights of both today and tomorrow.

For today’s challenges, cooperative deployments increase the power of U.S. Navy units putting out to sea right now. Many of U.S. allies possess valuable niche capabilities in which they have prioritized investments, while others may be more accustomed to operating in environments where the U.S. Navy is less experienced. Before the Harry S. Truman CSG in 2018 became the first U.S. aircraft carrier to operate in the Arctic in thirty years, for example, the Norwegian frigate HMNoS Roald Amundsen joined her for months of pre-deployment planning and training. Truman CSG CO Rear Admiral Gene Black later said of his time in the High North, “the Norwegians went out of their way to partner with us…one of their frigates joined my [CSG] and operated with every bit of the intensity and professionalism of one of our ships. And it was an absolute highlight that we could show up, never having operated together, and come together and operate at the highest level and in one of the most demanding environments that we could face.”

Deploying with partner nation ships in formation can also free up scarce U.S. resources for national tasking. This gives a commander flexibility to dispatch a ship for missions she might not otherwise pursue or to fill unexpected gaps. When the USS Fitzgerald collided with a Philippine container ship in June 2017, the New Zealand frigate HMNZS Te Kahana “flawlessly transitioned to help provide security and protection as part of the Nimitz Carrier Strike Group,” according to CNO Admiral John Richardson.

As for the future, cooperative deployments are uniquely positioned to advance CNO Gilday’s objectives for high-end interoperability. Combined planning, training, and deployment over extended periods of time provide all parties involved with unparalleled opportunity to test and advance the limits of integration. It allows sailors time to identify and resolve kinks in systems linkages, to learn about one another’s planning processes, doctrine, and capability, and to work through the human factors of building trust, language, and cultural proficiency. The real-world stakes of a deployment, moreover, provide a critical forcing function for problem-solving in the face of the unexpected.

Still another distinct advantage—both for today and tomorrow—involves the strategic messaging opportunity to showcase partners’ willingness to stand shoulder-to-shoulder with the United States military in real-world conditions. Strong alliances and partnerships constitute one of the United States’ most important assets in the battle for influence and strategic position that CNO Gilday describes. In this context, cooperative deployments involving, say, drills in the South China Sea with the Royal Navy or aerial operations in the Arctic with the Norwegians send a more powerful message than Washington sailing alone. Conversely, they can also provide Washington with a bellwether to understand the limits of some relationships. Last summer, for example, the Spanish frigate ESPS Mendez Nunez detached from the Abraham Lincoln CSG when Washington deployed it to the Middle East in response to rising tensions with Iran.

In light of the value proposition described above, we submit the following recommendations for adapting cooperative deployments to the goals of the CNO’s Design and the era of great power competition more broadly.

First, the Navy should explore creative variations on cooperative deployment execution. The Navy should strive to integrate its ships into select partner nation deployments just as it recruits others to join its own. These deployments would send the important strategic message that the U.S. is willing to support its partners in the same way they support the U.S., while enhancing the U.S. Navy’s future combined warfare capabilities. France recently deployed the Charles de Gaulle aircraft carrier to the Eastern Mediterranean with the Hellenic Navy frigate HS Spetsai among its escorts.

Second, the Navy should adhere to a minimum definition of what constitutes a cooperative deployment. A cursory internet search of the term yields press releases of engagements ranging from the Willemoes’ approximately year-long effort to plan, train, and deploy with the GHWBCSG in 2016-2017 and Japan’s various week-long integrations with the Reagan CSG in 2018 to various instances of what appear to be single-day training events with other partners. We recognize that the CDP derives value from its flexibility, but if every engagement is a cooperative deployment then nothing is a cooperative deployment, and that will dilute much of the substance of what makes cooperative deployments valuable in the first place. If the U.S. Navy wants to drive toward “full interoperability at the high end of naval warfare,” it must be honest with others and itself about what it takes to get there.

Lastly, the Navy should deepen the complexity of cooperative deployments with key allies in the Indo-Pacific Theater. Washington has a number of treaty allies in that region, many of whom operate U.S. military equipment and enjoy longstanding information sharing agreements with the United States. This goal may be easier said than done, but for the era of long-term competition it represents an important north star toward which to chart a course.

CNO Gilday’s FRAGO directs the Navy to prepare for tomorrow while working with what it has today. Cooperative deployments are a critical variable in that equation, and the Navy should continue to pursue them in the present while ringing the bell about what agreements it needs to begin negotiating now in order to advance them in the future. Doing so will sharpen an important and in many ways unique tool through which to pursue full interoperability with U.S. allies and partners for the high-end fight.

Dr. David Wallsh is a research analyst at the Center for Naval Analyses (CNA), where he specializes coalition operations, security cooperation and Middle East security. He earned his PhD in International Security at the Fletcher School of Law and Diplomacy at Tufts University.

Dr. Eleanore Douglas is a research analyst for CNA’s Strategy and Policy Analysis team, where she specializes in security cooperation, strategy and defense planning. She earned her PhD in Public Policy from the LBJ School of Public Affairs at UT Austin.

The views expressed in this article are theirs alone and do not reflect the official policy or position of CNA, the Department of Defense, or the U.S. government.

One thought on “Cooperative Deployments: An Indispensable Tool for Preparing for the High-End Fight”