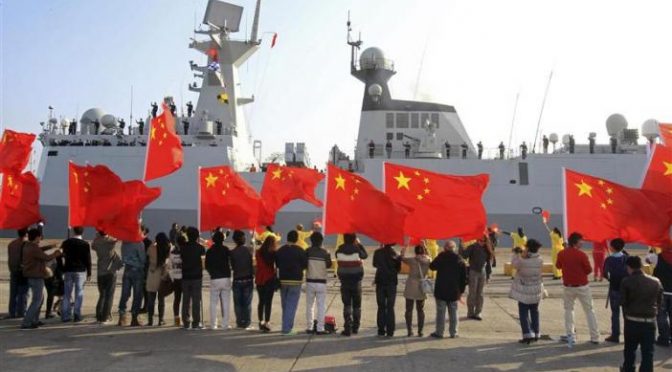 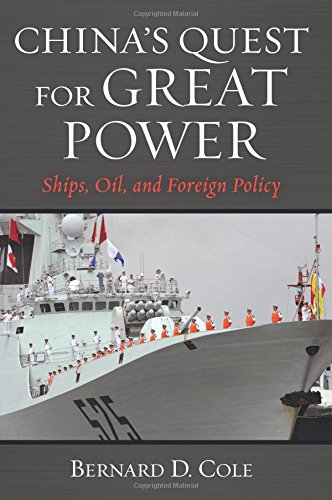 China’s Navy is emerging as a force capable of global reach following three decades of focused modernization, a transformation that has been fueled by China’s economic growth. Military analysts and Asia Pacific scholars closely watch China’s naval modernization in order to discern whether and in what ways China’s Navy will pose a threat to the United States and its interests. To understand the trajectory of China’s Navy, one must also examine the trajectory of China’s economy and how its growth fits into China’s overarching foreign policy and the stability of the PRC government. Author Bernard Cole accomplishes this In China’s Quest for Great Power: Ships, Oil, and Foreign Policy.

Reading this book left me with two primary impressions. First, I was impressed with how much it covered. The titles of the book’s chapters highlight the breadth of topics: maritime world, PRC maritime forces, maritime strategy, economy, energy security, foreign policy in the making, and foreign policy in action. Entire books could, and have, been written on each of these individual topics. This is also apparent through a review of the notes and bibliography sections of the book, which, at 75 pages, are nearly a third of the length of the book. Second, I was impressed with how succinctly Cole tackles each subject.

The strength of this book is Cole’s ability to break down such an expansive and complicated topic into neatly crafted subunits. In the Navy, we use the term ‘wave tops’ to describe the highlights of a much more thorough recounting of an event or analytical product. This book is a careful threading of the ‘wave tops’ of recent events, historical context, and Cole’s own analysis of the subject. The sole weakness of this book is that it is never allowed to deeply delve into one specific area. Though succinctness and breadth was the author’s intent and also the source of the book’s strength, the lack of depth makes this book more of a launching point toward further and greater research than a single, comprehensive resource.

For those new to the China’s foreign policy and maritime development, this book will surely be an invaluable resource. As a naval intelligence professional, my early education of the region was primarily focused on military capabilities and largely avoided the topics of economics and foreign policy. Greater context, however, was severely lacking, and such a lack of context lessens the ability to understand the particular drivers behind a foreign military’s actions whenever a significant event occurs. China’s military, like those of other nations across the globe, does not operate in a vacuum. To better understand the Chinese navy we must all broaden our scope to cover other tangential but intertwined areas. Reading this book serves as a good step in that direction.

For those scholars on the subject, the so-called “China Hands,” this book will help readers keep current to the late 2015, early 2016 timeframe with the added benefit of doing it in as few pages as possible. Specifically, Cole’s book incorporates the PRC’s newest leadership statements, defense white papers, and other official documents to bolster his analysis and infer the direction in which China’s Navy is headed. Most prominent of the recently released official documents cited in this book was China’s 2015 Defense White Paper which was used to support Cole’s thesis: China’s pursuit of continued naval expansion is both a priority and directly tied to China’s economic expansion.  Furthermore, Cole argues that China’s economic expansion is directly tied to regime stability, which he uses as a basis for assessing the trajectory of China’s Navy. For Cole, and I personally agree, the direction in which China’s Navy and interests are headed is ever outward and forward.

Cole highlights China’s reference of the United States as its primary security concern in its 2015 military strategy (p.200). While eventual war with China is not a foregone conclusion, the threat of conflict has increased as the balance of power between the United States and China has leveled, making pursuit of greater understanding of China’s Navy, foreign policy, and future growth all the more important. This will become increasingly true as China further expands its global reach and finds itself competing with the United States for control over limited resources essential for growth in both countries.

Lieutenant John A. Bardenhagen III is currently stationed at U.S. Pacific Command’s (PACOM) Joint Intelligence Operations Center (JIOC). He has previously served on the U.S. Seventh and Third Fleet Staffs, at the Chief of Naval Operations-Intelligence Plot, and on the COMPHIBRON FIVE Staff aboard the USS MAKIN ISLAND (LHD-8). He recently graduated in 2016 from the Naval Postgraduate School in Monterey with a Master of Arts Degree in national security affairs, specializing in Far East Asian regional studies. His opinions do not represent those of the U.S. Government, Department of Defense, or Department of the Navy.