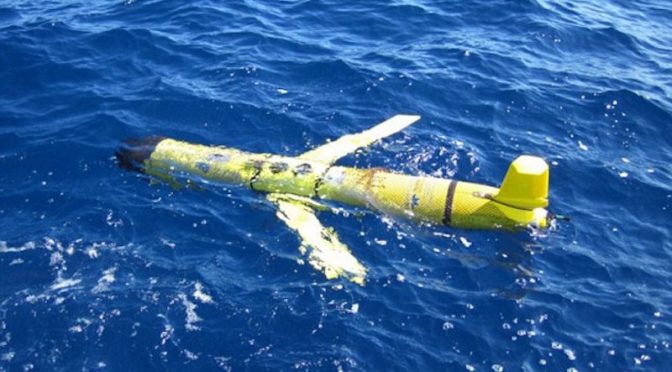 On December 15th 2016, the Chinese Navy seized an American unmanned underwater vehicle (UUV) operating in international waters off the Western coast of the Philippines. The USNS Bowditch, an unarmed T-AGS class hydro-graphic survey ship, was being shadowed by a People’s Liberation Army-Navy (PLAN) salvage vessel identified as a Dalang-III class (ASR-510).

The UUV had surfaced as part of a pre-programmed instruction, and sent  a radio signal marking it’s position for pick-up. As the Bowditch was preparing to recover the drone from the water, a small boat crew from the Dalang III raced in and plucked the unmanned vessel. The incident occurred approximately 50 nautical miles northwest of Subic, Luzon.

While the exact type of drone is unknown, there have been several instances of U.S. Navy Slocum Gliders snagged in local fishermens’ nets or washed ashore on beaches in the Philippines. This type of drone is not weaponized, and is used to collect a variety of environmental readings such as water temperature and salinity, to improve forecasting accuracy of extreme weather such as typhoons. The UUV uses wave movement to propel itself without any on-board engines, with an endurance time of months. The Department of Defense estimates the seized drone’s value to be around $150,000.

The crew of the Bowditch immediately contacted the PLAN vessel on bridge-to-bridge radio asking for the return of the drone. The PLAN vessel reportedly acknowledged the message, but then stopped responding and sailed away with the UUV. On Friday the 16th, the U.S. State Department issued a formal protest, or demarche, with the Chinese Department of Foreign Affairs, demanding an immediate return of the drone. At the time of this article’s publication, the Chinese government has not responded.

Motivations behind the seizure are unclear, but tensions between the two nations have recently increased over President-Elect Donald Trump’s conversation with Taiwan President Tsai Ing-wen in what Beijing considers a blatant disregard of the standing One-China Policy. It could also have been a quick riposte to undermine Head of Pacific Command U.S. Navy Admiral Harry Harris’ recent comments that the US is “ready to confront [China] when we must.”

Notably, the Philippines has chosen to remain silent over the incident. While traditionally a U.S. ally, the election of President Rodrigo Duterte has brought a deterioration of relations between Manila and Washington. Thanks in no small part to Duterte’s bloody prosecution of an Anti-Drug war punctuated by high civilian casualties and accusations of extra-judicial killings, a large multi-million dollar U.S aid package was just withdrawn this week – prompting the volatile President to threaten abrogation of the Visiting Forces Agreement. The Philippine Department of National Defense indicates they had no idea that the incident was ongoing; highlighting the enormous capability gap the Philippines has regarding Maritime Domain Awareness. The Philippine government became aware via communications from the U.S. State Department to their embassy in Washington D.C.

Coupled with Duterte’s increasingly close orbit of China following last month’s visit to Beijing, the United States could potentially find itself without bases that would ease the mission of maintaining a robust presence in the South China Sea. Recent analysis shows China has expanded militarization of their Spratly Island outposts by placing what appear to be defensive anti-aircraft and close-in weapon systems on Hughes and Gaven reefs, while fortifications have sprouted on Fiery Cross, Mischief and Subi reefs; the latter group are in close proximity to other claimant outposts in the region.

Taken together, China appears to be using it’s famous “Salami-slicing” techniques to slowly ratchet up its presence and capabilities within the region without crossing any significant “bright lines” leading to a military confrontation. The UUV seizure is consistent with opportunistic interference of U. .Navy operations while striking propoganda points with regional states. Notably, the unresponsiveness of Philippines to an international incident within their EEZ tells a tale that the U.S. cannot count upon its traditional ally going forward to assist in the presence mission.

Armando J. Heredia is a civilian observer of naval affairs. He is an IT Risk and Information Security practitioner, with a background in the defense and financial services industries.  The views and opinions expressed in this article are those of the author, and do not necessarily represent the views of, and should not be attributed to, any particular nation’s government or related agency.