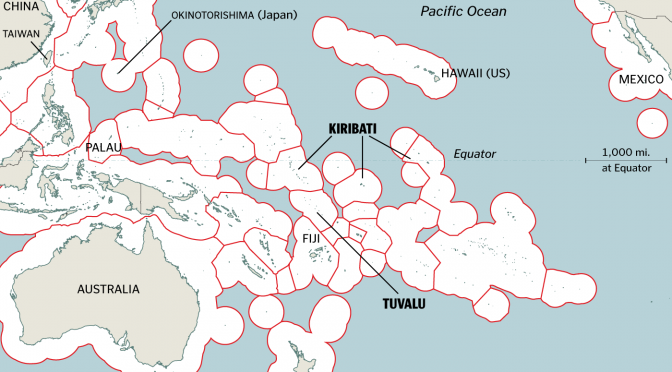 An interesting discussion took place in the Boston Globe about how to deal with potential changes in the world’s Exclusive Economic Zones (EEZs) as rising sea levels change the shape of land areas, perhaps resulting in the complete disappearance of some sovereign nations.

One of the possibilities is that the EEZs may be frozen in their current configuration and become an asset of the population, even after the land becomes uninhabitable or disappears completely, and that this asset may be sold, traded, or leased away. We know territorial sovereignty can be sold, after all, the United States benefited from the Louisiana Purchase and Seward’s Folly (Alaska).

A Chinese corporation has been attempting to build a new port complex on “reclaimed” land in Sri Lanka. “Located next to the Colombo Port, the US$1.4 billion project will add about 233 hectares of reclaimed land to the capital and house luxury office buildings, apartment blocks, a golf course, a water sport area, medical facilities, education institutions, hotels, a theme park and marinas.” The project is on hold right now, but if it goes forward, the Chinese firm would be granted  20 hectares (49.4 acres) on an outright basis and 88 hectares (244.6 acres) on a 99-year lease.

This is not a transfer of sovereignty, and  Sri Lanka is not in any danger of disappearing, but it does indicate the scope of China’s interest in the area and, located right off the Southern tip of India, it is sure to feed into India’s fears of being surrounded by a Chinese “string of pearls.”

Potentially more serious is the decision of the government of the Maldives, “The law passed by the Parliament will now allow absolute foreign ownership of land in Maldives if the investment is above USD 1 billion. The caveat to the law is that 70% of the land has to be reclaimed from the sea.”

The Maldives, with an average elevation of 1.6 meters,  is one of those island nations in danger of being adversely effected by rising sea levels. If anyone takes the Maldives up on their offer, it will probably be the Chinese, who have already shown a lot of interest in the Indian Ocean island nation, despite Maldivan assurances to India that no Chinese military base will be allowed on its land. Again this is not a transfer of sovereignty, but it may be a harbinger of things to come

Besides I really wanted everyone to see the chart of Pacific EEZs. A lot of that is U.S. EEZ.