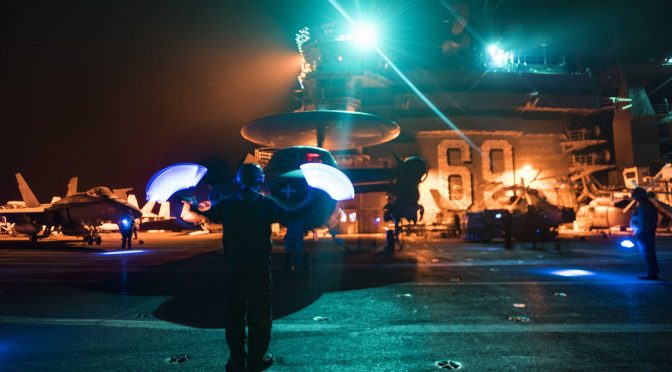 Anyone who has followed the development of the Air-Sea Battle Concept (ASBC) turned Joint Access for Maneuver in the Global Commons (JAMGC) and the closely associated term, A2/AD, knows this amalgamation of terminologies, ideas, and concepts has generated a significant amount of confusion and discontent across the defense establishment. On October 3, while participating in a Maritime Security Dialogue at the Center for Strategic and International Studies, Chief of Naval Operations, Admiral John Richardson continued this trend when he voiced his displeasure with the term A2/AD. “To some, A2/AD is a code-word, suggesting an impenetrable ‘keep-out zone’ that forces can enter only at extreme peril to themselves. To others, A2/AD refers to a family of technologies. To still others, a strategy.  In sum, A2/AD is a term bandied about freely, with no precise definition, that sends a variety of vague or conflicting signals, depending on the context in which it is either transmitted or received.”1 Admiral Richardson went on to say, “To ensure clarity in our thinking and precision in our communications, the Navy will avoid using the term A2/AD as a stand-alone acronym that can mean many things to different people or almost anything to anyone.”2 The author personally doesn’t agree with the decision to eliminate A2/AD from the Navy’s lexicon, and stated opposition in a CIMSEC debate post in November.

However, what was striking about CNO’s address were the four reasons he offered for banning A2/AD, three of those are particularly germane and will set the initial course for this column. In his remarks, Admiral Richardson stated the following:

“First, ‘A2AD’ is not a new phenomenon. The history of military contests is all about adversaries seeking to one-up each other by identifying their foes at longer ranges and attacking them with ever more destructive weapons. As technologies change, tactics change to react to and leverage them. It is only relatively recently in our conversation about warfighting that we have discussed these trends as something new.  But history has much to teach us about maintaining perspective on these developments and on charting the path forward to address them. Think Nelson at the Nile and at Copenhagen, Farragut at Mobile Bay, Nimitz, and Lockwood in the Pacific…this is nothing new. Indeed, controlling the seas and projecting power – even in contested areas – is why our nation invests in and relies upon a naval force in the first place.”

The second reason is that the term ‘denial,’ as in ‘anti-access/area denial’ is too often taken as a fait accompli, when it is, more accurately, an aspiration. Often, I get into A2AD discussions accompanied by maps with red arcs extending off the coastlines of countries like China or Iran. The images imply that any military force that enters the red area faces certain defeat – it’s a ‘no-go’ zone! But the reality is much more complex. Achieving a successful engagement requires completion of a complex chain of events, each link of which is vulnerable and can be interrupted. Those arcs represent danger, to be sure, and the Navy is going to be very thoughtful and well prepared as we address them, but the threats are not insurmountable.

Third and related, A2/AD is inherently oriented to the defense. It can contribute to a mindset that starts with how to operate from beyond the red arcs – an ‘outside-in’ approach. The reality is that we can fight from within these defended areas and if needed, we will. Inside-out, as well as outside-in, from above and from below – we will fight from every direction. The examples above show that this has been done before.”3

Admiral Richardson’s remarks are poignant and zero in on the complexities associated with this topic and are worthy of further analysis.

First, CNO recognizes that history has much to teach the Navy about the A2/AD conundrum. However, Admiral Richardson assumes that those studying contemporary A2/AD issues are well-grounded in history. Nelson, Farragut, Nimitz and Lockwood all had to contend with A2/AD problems, but these references are perhaps not the best ones. The study of history doesn’t always yield viable solutions to contemporary problems, especially when the wrong examples are pulled from history. Moreover, it seems likely that only consummate navalists would truly appreciate CNO’s references to Nelson, Farragut, and Admiral Lockwood. There are better examples in history that are relevant to the study of A2/AD and this column will bring those to light.

The sophistication and capabilities of A2/AD networks, at times, appear to intimidate those studying this topic, hence the fait accompli CNO mentioned. There is some legitimacy to this fait accompli mentality as the U.S. Navy hasn’t faced anything that looks likes these A2/AD networks since World War II. For instance, the Solomon Islands Campaign is a perfect example of the complexities CNO refers to in his second and third points. The Imperial Japanese Navy (IJN) employed a wide array of capabilities against the U.S. Navy, and at times, were very effective at restricting or reducing the Navy’s freedom of maneuver and access. In fact, within the first 24 hours of landing on Guadalcanal, the Navy faced IJN fighter aircraft, bombers, and ships, all of which were superior in some way to the aircraft and ships the USN brought to the fight. The U.S. Navy suffered one of its worst defeats at sea, where four cruisers were lost, one Australian and three U.S., in the early morning hours following the landing.  In the end, the U.S. Navy would take Guadalcanal after six months of heavy fighting and use the island as a base of operations for counterattacks on the IJN. Well within the range of the IJN’s ships and aircraft, the counterattacks staged from Guadalcanal offer several examples of how to conduct a successful campaign from within the defensive arcs of an adversary.

In the articles that follow in this column, these complexities will be explored as well the means developed to counter them. For the most part, the column will focus on historical cases that are relevant to the points raised by CNO. The column will also examine emerging issues and occasionally look towards the future. While there is no clear-cut solution to countering the proliferation of A2/AD capabilities, there is no shortage of historical examples that will be examined which are connected to this topic.

Bob Poling is a retired Surface Warfare Officer who spent 24 years on active duty including tours in cruisers, destroyers, and as commanding officer of Maritime Expeditionary Security Squadron TWO and Mission Commander of Southern Partnership Station 2013. From May 2011 to May 2015 Bob served on the faculty of the Air War College teaching in the Departments of Strategy and Warfighting. He was the Naval History and Heritage Command 2014-2015 Samuel Eliot Morison scholar and is pursuing his Ph.D. with the Department of Defence Studies, King’s College London where he is researching Air-Sea Battle concepts used to combat A2/AD challenges encountered during the Solomon Islands Campaign.