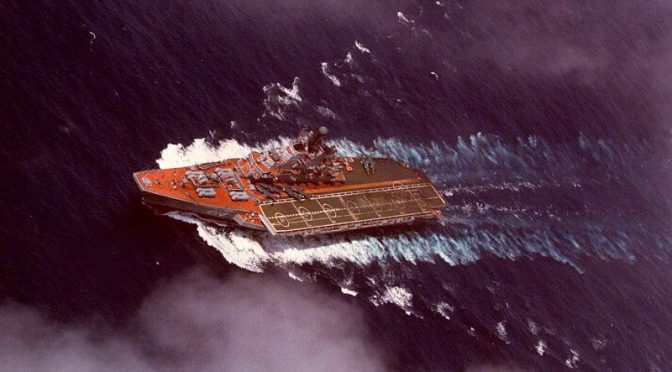 The Mission Command Vessel (MCV) capital ship of 2035 is a “key node” in the global U.S. Defense network dominating the tactical area of responsibility (TAOR) assigned to it. The vessel is usually supported by, and is at the center of, an accompanying Advanced Task Force (ATF). The MCV integrates their systems and capabilities for maximum combat power and efficiency. It is the ability within an ATF to integrate different weapons systems and different types of vessel to maximum effect that makes the MCV a “capital ship.”

The MCV is at once continuously connected to every other vessel in the ATF, and the systems and munitions which they control, as well as to a global network of sea and shore-based command units including links to Air Force and Army commands and their equivalents of the MCV key nodes. The intelligence which the ATF and the MCV gather is at once relayed to other commands, and in turn their intelligence to it. In the event of the failure or destruction of an MCV another MCV or shore-based command can take control of the units of the ATF to continue with the mission or withdraw the force.

The MCV is under human command and control while many of its networked assets are Unmanned Aerial Vehicles (UAV), Unmanned Underwater Vehicles (UUV) and Unmanned Amphibious Ground Vehicles (UAGV). These are third-generation systems requiring little human interaction and are capable of limited threat analysis and decision-making.

The design philosophy of the MCV is governed by two imperatives: the need for stealth, and the need for command and secure communication with massive bandwidth and high levels of computing power to ensure excellent data collection and distribution. The vessel is, then, capable of operating above and below the water, and is nuclear powered to ensure the provision of adequate power to its onboard systems. The secure-comms system developed out of DARPA’s Mobile Offboard Clandestine Communications (MOCCA) program ensures, along with the advanced autonomy of the UV elements of the ATF, that comms traffic does not compromise the MCV’s stealth capabilities.

By early twenty-first century standards, the crew of the MCV is comparatively small, but computing and communication systems are far greater in their power and reach. The vessel above surface deploys advanced defensive/offensive weapons systems including 200kw lasers and a missile system capable of engaging aerial threats including hypersonic missiles. Below surface threats to the vessel are countered by mini-torpedoes that can target conventional torpedoes, enemy Unmanned Underwater Vehicles (UUV), and be directed against mines which might inhibit the navigation of the MCV.

The MCV’s own UUV craft (each about the size of a conventional torpedo) are capable of wide deployment, carry passive sonar, and can send out active sonar pings. The returns from the active pings are received and monitored on-board the MCV. The sonar on-board the MCV’s UUV extend the sensor range of the vessel, and are also equipped with systems which allow the UUV to mimic the sound profile of a range of vessels. They are thus able to be employed as lures for enemy vessels, or to present potential threats from surface vessels or submarines where none are present. The UUVs can also be tasked to gather hydrographic, meteorological, and environmental data which may assist the mission.

The UUV units play a vital role in the security of the MCV and its ATF. The subsea security of the task force is further enhanced by the presence of two conventionally crewed SSNs which carry their own UUVs with capabilities identical to those carried by the MCV. Together the MCV, SSNs and their attendant UUVs can actively and passively detect underwater threats over an area large enough to ensure the safety of the ATF.

The reach and flexibility of the MCV is further extended by onboard Unmanned Aerial Vehicles and Unmanned Amphibious Ground Vehicles which can be deployed for the purposes of reconnaissance on land and in the air, or for offensive/defensive purposes. The UAGVs can be used to attack specific targets on land, and the UAVs of the MCV can maintain a Combat Air Patrol (CAP) over the Advanced Task Force, or be used to target beach head defenses or targets further inland. Both the UAGVs and UAVs can be employed with special force units (eg. FORECON, USMC) in carrying out deep reconnaissance operations (eg. Key Hole), or be used in support of larger USMC amphibious operations launched from conventionally crewed LPDs (Landing Platform Dock) operating with the ATF.

The true secret of the MCV’s offensive potential lies not in its own limited offensive systems but in the new generation of general purpose Autonomous Arsenal Vessels (AAV) which will accompany the highly mobile Advanced Task Force (ATF). These AAV can have payloads dedicated to particular tasks, such as beach assault/air defense/anti-submarine warfare, or contain a general mix of smart munitions (e.g. vertically launched cruise missiles/hypersonic missiles) designed to augment the offensive and defensive capabilities of the MCV. Replenishment of the AAVs, and more extended maintenance and repair issues are handled by Force Replenishment and Repair Vessels (FRRVs).

At sea specialists based on the MCV service and maintain and repair the Arsenal Ships, and the UAVs of the MCV can maintain a Combat Air Patrol (CAP) over the Advanced Task Force. The UAVs and UAGV can be recovered either by the MCV or by LPDs, each with its USMC complement, operating as part of the ATF.

For particular missions, the MCV can also take local control of additional assets (manned and unmanned) which can be dispatched to its TAOR, and vectored to its location before being released to MCV control. Most importantly, this includes additional air assets including fighter aircraft, next generation stealth aircraft, unmanned B-52 bombers equipped with smart weapons, and next generation ground support.

The MCV capital ship is the heart of the Advanced Task Force: capable of waging a flexible Sea, Air, Land battle from the deep oceans to the littoral zones likely to become the key centers of conflict in the mid-twenty first century. It is at the same time, a command vessel, a warship, and a key node in a global intelligence combat network allowing shore-based command a continuous flow of information, and the ability to flexibly project the power of the United States military around the globe. It is the capital ship of the mid-21st century, making the most of America’s technological lead, while providing the maximum protection for the service personnel of the United States Navy.

G.H. Bennett Ph.D. is associate professor of history at Plymouth University where he has taught since 1992. He is author of 15 books dealing with military, political, and diplomatic history. He writes for the Phoenix Think Tank and is a trustee of the Britannia Royal Naval College Museum.