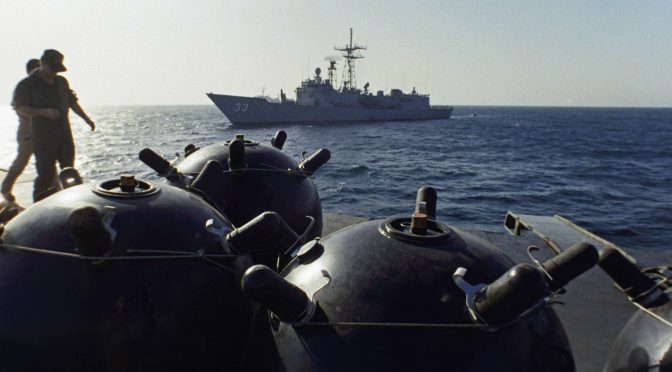 Naval experts almost universally agree that conducting effective mine countermeasures (MCM) is one of the most difficult and time-consuming missions for navies to successfully execute. Mines come in many different and increasingly deadly types, and can be deployed in deep or shallow waters, and in the surf zone. The bottom clutter and the dark, turbid ocean environment effectively helps to hide them from easy detection.

While difficult to undertake and execute well under demanding operational conditions, achieving success in the MCM world is not a mission impossible. For the U.S. Navy, MCM has been comprised of minehunting and minesweeping tactics using a dedicated force of MCM-capable ships, helicopters, and specially-trained Explosive Ordnance Disposal units. But the legacy MCM inventory is becoming increasingly costly to maintain and is rapidly approaching the end of its useful service life.

Today the Navy is approaching a strategic juncture in MCM where a host of emerging technologies provide new opportunities for widening the traditional approach to mine warfare and could, if successfully executed, bring about a 21st Century renaissance in MCM. Harnessing these new technologies to assist in resolving the very challenging MCM mission set is critical to the future of how the U.S. Navy conducts mine warfare, especially in light of emerging global great power threats.

The list of emerging technologies goes well beyond the additional capability being brought to the Fleet through the modular MCM Mission Package on the Littoral Combat Ship, to include new airborne and unmanned systems and integrated processing capabilities. These systems offer increased speed of operations, faster processing times to identify mines and other underwater objects, and fewer false alarm rates. The modular LCS MP will increase the pace at which Navy formations can clear mined waters. But this is just the beginning for how MCM can transform to conduct future mine warfare operations.

Some of the most salient technological opportunities of importance to naval mine warfare include exploring the integration of artificial intelligence and machine learning; the increasing technical maturity of unmanned underwater vehicles (UUVs) and unmanned surface vessels (USVs), combined with their expanding inventories; assessing new advances in communications, especially underwater; new algorithms being developed for the execution of swarm tactics; the assessment of advances in computer processing speeds; and modular systems engineering techniques for mine warfare.

Technologies and tactics that can help conduct in-stride mine detection are also of keen interest, because dedicated and optimized modular MCM forces will not be available everywhere and at all times. Similar to the tactics U.S. military land forces adopted in Iraq and Afghanistan over the last two decades, the Navy is keen to understand how risk to general purpose forces, operating in a distributed maritime fight, can be reduced through technological and tactical advances that can help these ships avoid the most common mine threats they may encounter. Optimization of ships and submarines for an MCM “mark and move” capability will be critical to ensuring the Navy can maintain freedom of access and maneuver during great power conflict.

To better understand the impact emerging technology poses for MCM and to jumpstart critical thinking, the Navy’s Program Executive Office for Unmanned and Small Combatants (PEO USC) is teaming with the Center for International Maritime Security (CIMSEC) to solicit new ideas. Here are some of the strategic questions that PEO USC is seeking to explore regarding the future of Navy MCM systems:

Contributors can answer these questions and more to help chart the course for the future of U.S. Navy MCM capabilities and concepts. Please send all submissions to Content@cimsec.org.

Dr. Sam Taylor received his doctorate degree in Engineering from the University of Memphis in 1994, where his major was electrical engineering. He received his bachelor’s degree and master’s degree in electrical engineering from the same institution in 1990 and 1991, respectively. Dr. Taylor is responsible for the overarching leadership of the Mine Warfare portfolio within PEO USC and works to ensure the seamless delivery of mine warfare capability to the fleet. Prior to joining PEO USC, Dr. Taylor worked at the Naval Surface Warfare Center Panama City Division, Florida, in numerous positions, including the Deputy Department Head for the Littoral and Mine Warfare Systems Department and Chief Technology Officer.

Featured Image: (September 21, 1987) Mines on the Iranian ship Iran Ajr during a personnel inspection of the USS Lasalle in the Persian Gulf. (AP Photo/Mark Duncan, Archive)