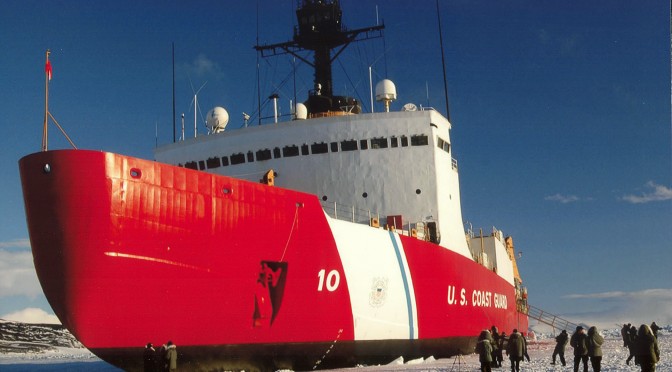 Sometimes the best resources are not hidden behind a paywall but are freely made available to researchers. Thanks to the Congressional Research Service’s 114-page report Changes in the Arctic: Background and Issues for Congress by Ronald O’Rourke, with a recent version released in September 2015, such is the case for those wishing to understand strategic trends in the Arctic from the perspective of the United States. This is especially timely, as US President Barack Obama toured Alaska from August 31, 2015, becoming the first American president to visit America’s Arctic region. On September 4, just days after President Obama arrived in Alaska and the very same day the CRS released its report, five People’s Liberation Army Navy (PLAN) vessels – three surface combatants, an amphibious landing vessel, and a replenishment ship – entered within twelve miles of the Alaskan coastline.

The report offers a comprehensive overview of legislation and international agreements concerning the Arctic, as well as the economic opportunities yet to be realized in the Chukchi Sea, Beaufort Sea, and elsewhere in the region. Although Shell has since cancelled its plans for offshore drilling in the Chukchi Sea, oil and other commodity prices could at some point in the future return to levels where Arctic resource exploitation becomes profitable once again. Arctic shipping is also becoming viable – that much was made clear when MV Yong Sheng became the first container-transporting vessel to transit from its home port in China along the Northern Sea Route, Russia’s Arctic waterways, to reach Rotterdam, Netherlands in August 2013. It is this increased opportunity for business in the region which presents new challenges for the United States Coast Guard (USCG) and United States Navy (USN).

As the report highlights, eight ships were lost in Arctic Circle waters in 2006. Less than a decade later, in 2014, there were 55 ship casualties in these waters. Thus far, the risk to human life and environmental impact of these accidents have been relatively limited, but it is apparent that US maritime forces currently lack the means to respond quickly and effectively to a serious disaster in the country’s Arctic waterways. The CRS highlights two capability gaps: basing and icebreaking.

Currently, the largest USCG base is located at Kodiak Island, which is on the south coast of Alaska near the Aleutian Range. USCG vessels operating from Base Support Unit Kodiak could respond quickly to an incident along existing shipping lanes near the Bering Sea but would need days or even weeks to reach the site of a ship collision or oil spill in the Chukchi Sea or Beaufort Sea. The US Army Corps of Engineers has been investigating the suitability of other Alaskan communities, specifically Nome or Port Clarence, as possible sites for a deepwater port from which USCG vessels could operate in the future. Located much further north along the Alaskan coast – jutting out into the Bering Strait in fact – either location would significantly cut down USCG response times in the Chukchi Sea. Port Clarence is already home to a small USCG presence: a 4,500 foot long paved runway capable of accommodating search-and-rescue (SAR) aircraft. Until a deepwater port is established within range of the Chukchi Sea, however, the US capacity to exert sovereignty in the Arctic will be severely limited.

The other capability gap identified in the report relates to the USCG’s shrinking fleet of icebreakers. After USCGC Polar Sea suffered an engine casualty in June 2010, the US has only the heavy polar icebreaker USCGC Polar Star and the medium polar icebreaker USCGC Healy at its disposal. Although Polar Star was refurbished and re-entered service in December 2012, this is only expected to extend the vessel’s service life until approximately December 2022. Unless Polar Sea is repaired or the White House significantly steps up efforts to acquire a new heavy polar icebreaker, the USCG could soon find itself unable to reach the US’ northernmost waterways due to sea ice cover. Much as the USCG is currently under-equipped to project American power in the Arctic, the USN also suffers a capability gap. The updated Navy Arctic Roadmap for 2014-2030, which was release in February 2014, acknowledges that opportunities for Arctic transits will be limited in the near term but commits to obtaining the capability necessary to operate for sustained periods in the Arctic by the 2020’s.

How the USN intends to attain this capability in the mid-term is unclear. In 2002, the Norwegian Coast Guard gained the icebreaking-capable offshore patrol vessel Svalbard, which has ensured a permanent presence for Norway in the Barents Sea and the Arctic waterways surrounding the Svalbard Islands. By spring 2018, the Royal Canadian Navy will begin taking delivery for the first of its new Harry DeWolf-class Arctic offshore patrol ships, a fleet of five to six vessels with some limited icebreaking capabilities and a similarly sustained presence in Canada’s expansive Arctic territory. The USN will presumably need vessels with characteristics closely resembling those of the Harry DeWolf-class and Svalbard-class; ice strengthening ships from the Military Sealift Command (MSC) as proposed in the Arctic Roadmap would very likely be insufficient, especially when China has demonstrated a willingness to engage in freedom of navigation operations (FONOPS) in American-claimed waters and the Russian Federation is aggressively expanding its already impressive icebreaking capabilities.

The Arctic Coast Guard Forum (ACGF), which was established in October 2015, will ensure some level of security for Arctic shipping and may even go toward reducing tensions in the region. Canada, which chaired the Arctic Council from 2013 until April 2015, endeavoured to establish just such a forum for exchange among the coast guards of the Arctic Council’s eight member states (Canada, Denmark, Finland, Iceland, Norway, Russia, Sweden, and the US) but was unable to bring the Russians to the negotiating table. The US, which will chair the Arctic Council until April 2017, is clearly willing to assemble a toolbox of so-called ‘confidence and security-building measures’ (CSBM’s) to ensure any future disputes in the Arctic are resolved peacefully. With the conclusion of an Arctic Search and Rescue Agreement (ASARA) in 2011, which clarifies which states have responsibility for SAR operations in certain Arctic waterways, there is clearly a growing interest in cooperatively policing Arctic waterways.

As outlined here, the CRS report is a valuable resource for those wishing to gain a strong basis of understanding with regards to the Arctic. Readers are fortunate, then, that an updated edition of the report continues to be released almost quarterly.

Paul Pryce is a Senior Research Fellow at the Atlantic Council of Canada and a Board Member at the Far North Association. He is also a long-time member of the Center for International Maritime Security (CIMSEC).