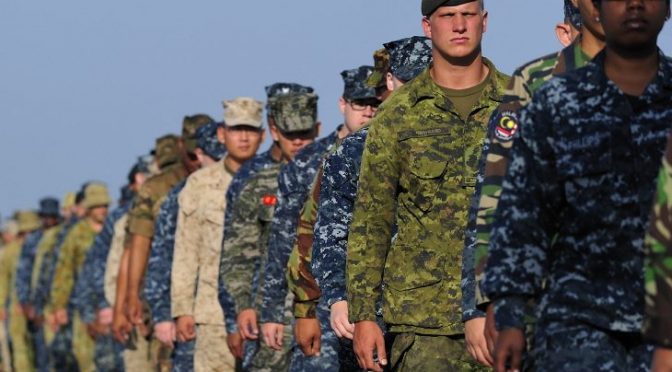 The following was originally published by the Conference for Defence Associations Institute. Read it in its original form here.

CDA Institute guest contributor Dave Beitelman, a PhD candidate at Dalhousie University, comments on why Canada should take a stronger position on China’s claims in the South China Sea. This is Part 1 of a two-part series.

It was just announced by Defence Minister Sajjan and Foreign Affairs Minister Dion that Canada will be contributing a battalion-sized force as a key element of NATO’s enhanced Forward Presence in Eastern and Central Europe. With smaller commitments elsewhere, including in Iraq and Ukraine, this is a considerable commitment, and one which will limit the ability of the Canadian Army to deploy elsewhere. To put this new troop commitment in perspective, Canada deployed, on average, 2,500 troops to Afghanistan at any one time – the size and duration of which put an incredible strain on the Canadian Armed Forces (CAF). The new NATO deployment is expected to number approximately 1,000CAF personnel, though the exact number, and their particular responsibilities (infantry, support, etc.,) will not be known until a formal announcement is made at the NATO Summit in Warsaw.

In the official press release, Minister Sajjan is quoted as saying, “As a responsible partner in the world, Canada stands side by side with its NATO Allies working to deter aggression and assure peace and stability in Europe.” As a member of the NATO alliance, it makes sense that Canada would contribute to the mission, and can even be seen as an expansion of the work the CAF have been doing in Ukraine. Beyond the alliance politics, however, the more fundamental point is that Canada’s strategic and economic interests are served by a stable and peaceful Europe. Contributing to that stability is part of being a responsible ally and member of the global community.

Far from the borders of Eastern Europe, however, another challenge to the peace and stability of the global order is unfolding in the Asia-Pacific region, and most pressingly in the South China Sea. On July 12, the Permanent Court of Arbitration (PCA) in The Hague is set to announce its verdict on the maritime jurisdiction dispute between the Philippines and China. China lays claim to nearly the entire South China Sea, while many other states in the region, including Malaysia, Taiwan, Brunei, the Philippines, and Vietnam, have claims of their own. China has said it will not recognize the Court’s ruling, a message the Chinese government has repeated since 2013.

While the circumstances and historical context of Russia’s challenges in Eastern Europe and China’s challenges in the Asia-Pacific are different, the essence is the same. In both cases, Russia and China have used proxy forces to do the pushing, with Russia using ‘volunteers’ and other non-official forces to help push its claims in Crimea and Eastern Ukraine, and China using a mix of coast guard and militia forces to bully its neighbors, while People’s Liberation Army – Navy (PLAN) vessels lurk nearby. By refusing to acknowledge the right of the PCA to hear the case, or even of the Philippines to file it, China has made its preferences well known: the South China Sea belongs to China and any disputes should be discussed and negotiated bilaterally, rather than through third-party mechanisms – particularly non-Asian ones. Notably, China can throw its weight around in bilateral negotiations and coerce its smaller neighbors more easily. This has the other states in the region worried, and rightfully so.

In addition to seeking closer ties to the United States, many states in the region have increased their defence budgets and made public statements denouncing China’s behavior. How China, the U.S., or any other country in the region will react to the PCA’s ruling is anyone’s guess. Some speculate China will unilaterally announce the imposition of an Air Defence Identification Zone (ADIZ) over the South China Sea, supported by the network of radar stations, missile batteries, and airstrips on the islands China has dredged into existence over the years. When China announced an ADIZ over parts of the East China Sea in 2013, the U.S. responded by flying two B-52 bombers through the zone. The stakes in the South China Sea, where the Chinese government has invested significant amounts of both financial and political capital, are much higher. Accordingly, tensions in the region leading up to the July 12th announcement are running high.

Over $5 trillion in trade passes through the South China Sea per year. The Canadian government has made the region a key economic priority, due to its many emerging economies, of which China is clearly the most important. To support its economic ambitions, Canada has also tried to gain membership to the institutions through which the region’s economic and security architecture are created, namely the East Asia Summit (EAS) and the ASEAN Defense Ministers’ Meeting Plus (ADMM-Plus). All that is to say, it is a region of the world where stability is being threatened and where Canada has substantial economic and strategic interests. And yet, while Canada has been vocal in opposing Russian aggression in Eastern Europe, it has been largely silent on Chinese aggression in the South China Sea. Save for two superficial ‘statements of concern’ by former Minister of Foreign Affairs John Baird, Canada has said almost nothing. And that is a mistake which sorely needs correcting.

The reasons for Canada’s silence vary. It has been said that Canada has no ‘real’ strategic interests at stake in the South China Sea or vis-a-vis China, nor any real capacity to influence Chinese behavior, and so Canada has little to gain by ‘rocking the boat.’ What’s more, China is an important economic partner with whom Canada has sought closer engagement. By involving itself in regional politics, Canada risks alienating its second largest trading partner. As I’ve argued elsewhere, these arguments don’t hold water.

Outside of its membership in NATO, what direct interests does Canada have in Eastern Europe or the Baltic states? Members of NATO determine their level of engagement based on the relevance to their national interests (along with other considerations), and so it would not be unusual for Canada to be less active in the region than it has been. And, given its recent long-term engagement in Afghanistan, and its on-going missions in the Middle East to combat ISIS, the argument that Canada isn’t pulling its weight would not be particularly persuasive.

Canada has as much interest in the stability of the Asia-Pacific as it does Eastern Europe, if not more. Not only does Canada have extensive economic interests in the region, the many partners Canada has been attempting to build relationships with do too. Canada’s Five Eyes allies Australia, New Zealand, and the U.S. are directly impacted by the rise of China. Japan, another important economic and defence partner, is at risk. Canada has very clear strategic and economic interests which are currently at risk. More to the point, however, the argument that Canada has few, if any, security interests at stake in the Asia-Pacific region contradict existing Canadian policies and actions– something I will explore in more depth in Part 2.

David A. Beitelman is a PhD Candidate in Political Science at Dalhousie University and a Doctoral Fellow at the Centre for Foreign Policy Studies, where he served as Deputy Director from 2013–14.

One thought on “Breaking the Silence: Why Canada needs to speak out on the South China Sea Part 1”