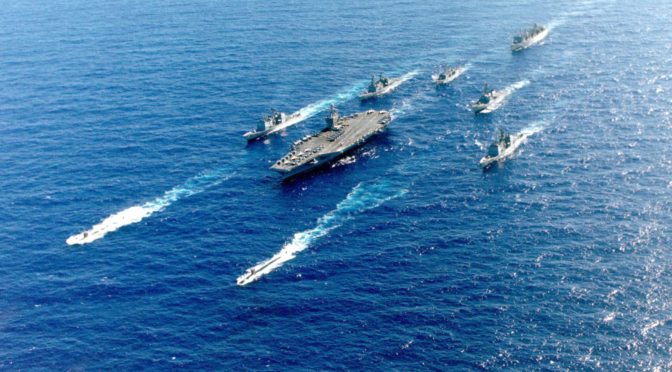 In his November 1997 Proceedings article, Admiral Jay Johnson, the Chief of Naval Operations, reflected on the landmark white papers …From the Sea, Forward…From the Sea, and the Navy Operating Concept and opined, “…the purpose of the United States Navy is to influence, directly and decisively, events ashore…from the sea, anywhere, and anytime.”1 Scratch nearly any thoughtful naval officer and one finds an intuitive belief that naval forces, particularly forward present naval forces, possess the capability to affect events ashore, indeed even to deter actions by other nations. But how does the ability to influence events ashore really work? What is the theoretical underpinning? Such questions normally leave us mumbling platitudes and surveying the dust on our shoes. This paper is intended to begin to build a theoretical understanding of influence, particularly how forward present naval forces influence events and actors ashore.

Why a Theory of Influence

Before considering “how” forward present naval forces support and foster U.S. influence, first, let us briefly consider why a theory of influence is necessary in the first place. Who needs it?

First, a theory helps us understand patterns of behavior. It helps us explain why events occurred in the past in a particular way, and a theory also serves as an aid in predicting future events. This does not mean that a theory will enable us to predict with perfect clairvoyance events of the future. What theory can do, however, is to allow us to “…trace the different tendencies which are inherent in the situation and to point out the different conditions which make it more likely for one tendency to prevail than for another, and, finally, assess the probabilities for the different conditions and tendencies to prevail in actuality.”2 The role of theory, then, is not just to account for the past or to explain the present but to provide a preview of what is to come. A theory of influence may be beneficial in helping us understand how nations have influenced each other in the past and to predict how influence may be accomplished in the future. Lastly, understanding how nations influence each other may help us deal with the issue of forward naval presence and how carrier strike groups and amphibious ready groups affect influence.

A Definition of Influence

In the foreign policy arena, influence is an index of state power. Regarding power, it is often said that power is to foreign policy experts and practitioners what money is to economists: the medium via which transactions between states are measured and observed.3 Power, however, is a useful concept only in its relative sense. That is, absolute measures of military strength, gross domestic product, technological advancement, and others are helpful, but provide an incomplete gauge of power. Power cannot be adequately assessed until it is employed, and it is employed by nations engaged in the process of attempting to influence each other. Until one state attempts to influence another, we have no useful measure of power. Accordingly, the following definition is offered: influence is the ability of one state to secure a decision and/or an action or inaction by another state consistent with the former’s desires.4

Although not all inclusive, there are some important characteristics of influence.

Inter-nation influence is not dyadic in nature. For analytical or planning purposes, it is convenient to think only of the reciprocal influence of one pair of nations on each other, but clearly the international system is not a dyad. Many nations simultaneously influence many others, either directly or indirectly, intentionally or unintentionally. Intentional or deliberate influence is called direct influence.6 Not only is the system characterized by reciprocity, but by multiple reciprocity.

One normally thinks of attempts to influence behavior within the context of behavioral modification. That is, one nation predicts that the behavior of another nation will be unfavorable and via various means and with various tools attempts to influence the nation in question to modify the anticipated unfavorable behavior. But as posited above, nations also attempt to influence other nations to assure or to increase the probability that the nation in question will continue to behave favorably. 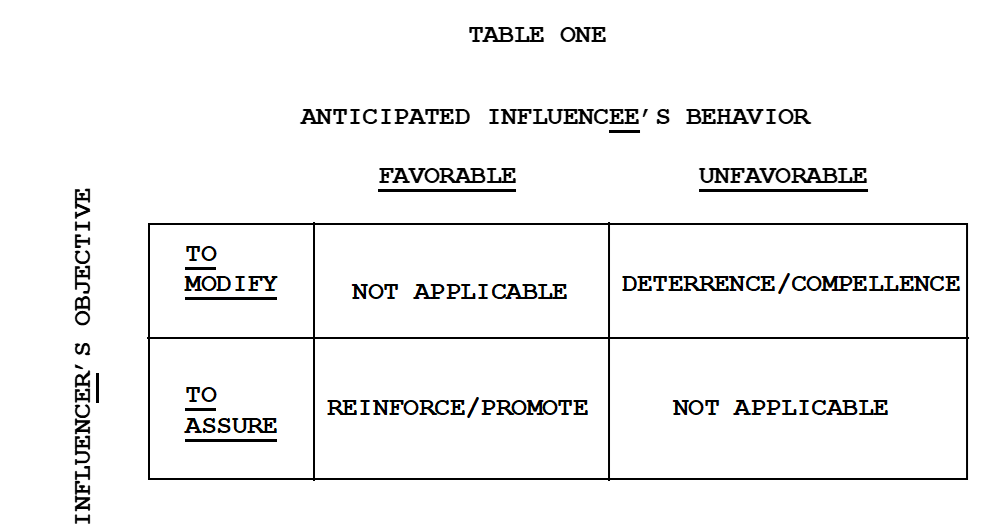 Some examples of influence efforts to deter, compel, reinforce, and promote may be helpful:

Relations between nations range from complete consensus on almost all issues (U.S.-U.K.) to total discord on nearly all issues (U.S.-Iran). The amount and type of influence required for the influencer to achieve desired behavior on the part of the influencee varies with the nature of the relationship between two nations and their level of shared interests.

For example, when dealing with the U.K., in many if not most instances, very little if any influence is required for the U.S. to achieve its desires. This is because of the high level of shared interests between the two English-speaking nations. The situation between the U.S. and U.K. is rather like a family situation when a brother approaches his sister to enlist her support in making arrangements to obtain medical care for an ill parent. Because both siblings share a common interest in the health and well-being of the parent, normally no influence is required by the brother to gain the sister’s cooperation – a simple request may be sufficient.

On the other hand, since the 1979 revolution, the U.S. and Iran have shared so few common interests that extraordinary leverage has been required for the U.S. to achieve its desires vis-a-vis Iran and vice versa. These have ranged from crippling economic sanctions and diplomatic isolation to the use of force against Iranian military assets during the Tanker Wars of the 1980s.

Most relations between nations lie somewhere between the U.S.-U.K. and the U.S.-Iran extremes. On those occasions when influence is required, two broad categories of techniques are available to the influencer.

With respect to the tools of influence, states may use diplomatic, economic, military, and informational tools to punish and to reward targets of influence.

Military tools of influence may be used to achieve military goals as well as political and economic objectives. Similarly, political and economic tools may sometimes be useful in gaining military objectives. For example, a trade embargo or conversely promising most favored nation trade status could be effective in deterring a nation from the sale of weapons of mass destruction. However, as relations between nations worsen, as they share fewer common interests, objectives can become more militarily dominated and defined, thereby causing the effectiveness of military tools of influence to increase.

Consider, for example, ensuring Iran compliance with UN sanctions. Although diplomatic demarches (political tool) and trade sanctions (economic tool) had been employed as threats to influence Iranian behavior, arguably the most effective tool to condition Iran’s actions is the presence of military forces (military tool) on the ground in allied states and naval forces on station in the Arabian Gulf and Red Sea. Moreover, because the predominant concern of U.S. allies and friends in Middle East is one of military security (against an assertive Iran) military tools take on disproportionate influence for the U.S. in region.

The Effectiveness of Influence

Having derived a definition of influence, examined its characteristics, the purposes and objectives for which it is used, the techniques employed to achieve it, and the effect of shared interests on the requirements for the use of those techniques, let us now consider what makes influence effective.

Each nation has, either explicitly or implicitly, a continuum from good to bad along which it assesses outcomes of an influence attempt. The continuum is based on values systems and although values systems certainly are not uniform from nation to nation, there is some degree of similarity. Outcomes which tend to restrict a nation’s freedom of action are normally placed low on the utility scale (or high on the disutility scale). Conversely, outcomes which do not restrict freedom of action are placed high on the utility scale (low disutility score).

Nations do not, however, make decisions based solely on the attractiveness or unattractiveness of various potential outcomes. Nations also compare outcomes not only in terms of desirability, but also in terms of estimated likelihood. While some nations are more risk-prone than others, most nations are fairly conservative in foreign policy. They seldom commit resources and prestige to the pursuit of an outcome which seems improbable, regardless of how attractive the outcome may be.

Recent studies suggest that there is another important dimension to credibility, one not based solely on military capability or political will to use military force, but the speed with which military power (influence) can be employed.9 That is, the influencee’s knowledge that the influencer possesses the capability to act without delay seems to be a key component in the influencee’s decision calculus. This, of course, bolsters and helps to explain the argument advanced by the Navy and Marine Corps regarding the special “shaping” (influencing) role of forward present Navy and Marine Corps forces. Their nearly constant presence in the Mediterranean, Indian Ocean/Arabian Gulf, and western Pacific is a visible reminder to friend and foe alike of U. S. intent, capability, and perhaps more importantly, the ability to act swiftly.

So, what does all this discussion of a theory of influence add up to? Hopefully, it will help naval officers better understand what we tend to understand intuitively already: forward present naval forces play a special role in influencing (shaping) other nations.

Being there counts. The ability to act without delay during the early days of a crisis or a potential crisis affects the influencee’s initial decision calculus in a special way. It precludes an opponent an early and easy fait accompli. It forces a rational opponent (influencee) to carefully evaluate carefully their courses of action. It tends to preclude impulsive behavior. It forces the influencee to conduct a utility/probability calculation. It buys us time to augment U. S. forces, if necessary. It gives us timely influence. And, at the end of the day, if the influence attempt is not timely, it is far less effective. Here in their forward presence lies the unique influence advantage of naval forces.

Captain Harris commanded USS Conolly (DD-979) and Destroyer Squadron 32. Ashore he served as Executive Director of the CNO Executive Panel. He was a CNO Fellow in CNO Strategic Studies Group XII. It was during his stint as a CNO SSG Fellow that this article was first begun. Captain Harris is indebted to Mr. Dmitry Filipoff for his efforts in updating the draft, sharping the arguments, and greatly improving the readability.

4. This papers examines the use of forward presence as an instrument of US influence and, therefore, focuses on those actions taken prior to the actual use of force, i.e., armed conflict.

5. The term “reinforcement” is taken from Singer, Ibid.