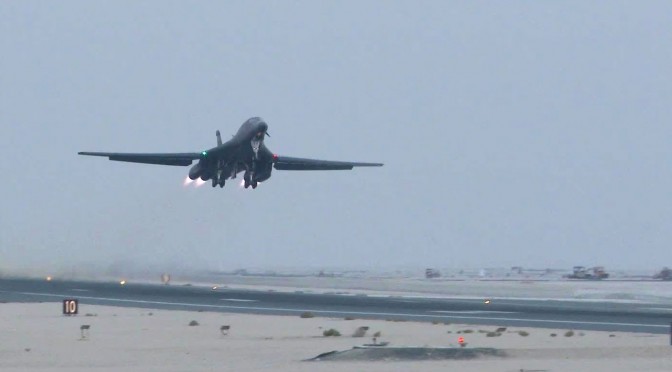 As the air war over northern Iraq expanded over the last week, Pentagon officials for first time acknowledged that land-based bombers have begun conducting strikes against the Islamic State, or ISIS, as it is formerly known. Though the specific bomber type was not named, B-1B Lancers are widely believed to be the bombers providing much needed air support to Kurdish forces who retook the Mosul Dam. The appearance of the B-1 in Iraq should come as no surprise, as its long-range, all-weather, day or night, and low- or high-altitude capabilities have made it one of the most heavily used strike aircraft in America’s air armada.

B-1s of the 7th Bomb Wing from Dyess Air Force Base in Abilene, Texas, had deployed to Al Udeid Air Base in Qatar earlier this month. The 350 service members and their B-1s replaced members of the 28th Bomb Wing, which also flies the B-1, as part of a routine six-month rotation, which both units have shared since the opening of the Afghan War in late 2001. With the U.S. still in Afghanistan and now returning to Iraq, the 7th will take on a challenge that only long-range bombers like the B-1 can meet: be on call to support operations in two different theaters while still based in Qatar.

Despite this unique ability, the B-1 has repeatedly been the target of budget hawks. Most recently, it was named as potential collateral damage in the effort to save the A-10 ‘Warthog.’ But its current deployment and continued development demonstrate how profound a mistake it would have been to discontinue the B-1

Originally developed as a nuclear bomber at the height of the Cold War, the B-1 has been continually updated to adapt to ever-changing threats the U.S. faces abroad. The B-1A variant was designed to replace the cumbersome B-52 with an agile supersonic bomber that could penetrate Soviet airspace at low level and drop nuclear weapons. But before it could ever enter service, B-1 was cancelled by the Carter administration, which cited its price tag, while arguing that air-launched cruise missiles (ALCMs) fired from the B-52 could do the same job. Four years later, President Ronald Reagan touted the B-1 as an example of Carter’s weakness on defense and revived the plane as part of the Long Range Combat Aircraft (LRCA) program.

LRCA arose because of the belief that by 1990 the B-52, even with ALCMs, would be increasingly vulnerable to improving enemy air defense systems. The updated B-1B variant promised a faster, more versatile bomber to fill the B-52’s role while augmenting the capabilities of the B-2 stealth bomber, which, at that time, was secretly still in development.

The collapse of the Soviet Union raised new questions, however. Without a nuclear-armed adversary, there seemed to be no need for a fleet of aircraft to drop nuclear bombs on distant continents. But with the rise of new conflicts, a need for long-range conventional strike capability endured. Following multiple updates, both the B-1 and the aircraft it was meant to replace, the B-52, were adapted to carry multiple types of precision-guided bombs and standoff weapons. Plus, in accordance with the START treaty, the B-1 was altered so it could no longer serve as a nuclear bomber. This allowed it to avoid the political stigma of stationing a nuclear capable bomber overseas. (Imagine the uproar from parking nuclear bombers across the Persian Gulf from Iran.)

Moreover, if, for example, the United States were to find itself in conflict in Asia, shorter-range aircraft fighters stationed at bases in Japan and South Korea would be vulnerable on the ground to long-range missile strikes. While the B-1, with its longer-range and ability to carry 24 Joint Air-to-Surface Standoff Missiles (JASSMs), could operate from far-off bases and beyond the limits of advanced air defense systems.

The B-1 could also play an important maritime role armed with the Navy’s forthcoming Long Range Anti-Ship Missile (LRASM). Paired with unmanned aircraft operating close to enemy shores, commanders will be able to direct LRASMs fired from B-1s to sink advancing warships without having to put pilots in danger. Additionally, this will complement the Navy’s own efforts over a wide battle-space, like the Pacific, providing a rapid strike capability where a limited number of friendly ships may not be able to cover.

Arguably, the one quality the B-1 does not have which critics claim will be vital in this kind of high-end conflict is stealth. But expanding evidence suggests modern stealth may soon be negated in a conflict with a sophisticated adversary.

Had the latest defense appropriation bill canned the B-1, much of this capability would have been lost until the next-generation bomber came online. Which, given that the Pentagon only just released the request for proposals and that the procurement process today is extremely sluggish, the next bomber will likely not be available for nearly a decade.

The Kurds at Mosul Dam are surely glad this did not happen.