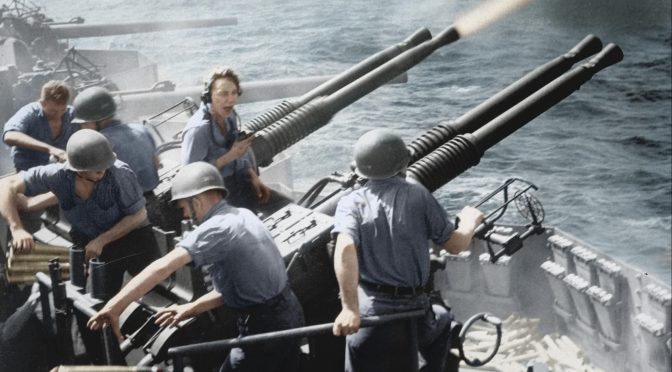 As the U.S. Navy shifts to reprioritize great power competition in line with the 2018 National Defense Strategy, close-in missile defense has taken on new importance. It is estimated the People’s Liberation Army Rocket Force, the branch of the Chinese military equipped with short, medium, and long-range ballistic and cruise missiles has an arsenal of thousands of missiles. As of yet, only the more recent classes are known to have guidance for striking maritime targets, but that may change. In addition, the People’s Liberation Army Navy (PLAN) has surface vessels of all sizes with hundreds more anti-ship missiles. At the low end is the Type 22 missile boat with eight missiles, and at the high end is the new Type 055 with 112 vertical launch cells that can be loaded with a variety of ordnance. These new PLAN missile capabilities has produced palpable anxiety in the US defense establishment. Last week in a confirmation hearing for the future Commandant of the Marine Corps and Chief of Naval Operations, Senator Richard Blumenthal (D-CT) asked how the Navy was planning on dealing with the “great risk” to their surface fleet. He was not the only Senator to voice his concern.

Though anti-ship missiles have not yet been used in in large-scale fleet combat, they have been used to deadly effect by aircraft and smaller surface combatants after their debut in the Yom Kippur War. All previous incidents also occurred in coastal or littoral waters. By all accounts, if and when large-scale, salvo-type fleet combat does occur, it will cause damage unseen since the large naval battles of the Second World War. In fact, there is perhaps no precedent for the destructive capacity of missile volleys except for the large-scale kamikaze attacks on the U.S. naval force during the battle of Okinawa.1 During the battle, hundreds of kamikazes were deployed and sunk over forty U.S. warships.2 Okinawa remains one of the costliest battles for the U.S. Navy in any conflict.

Kamikaze employment and tactics mirror what missiles salvos could look like today. The kamikazes were often based at austere airfields considered unsuitable for conventional operations, making them harder to identify by U.S. forces while also being low cost compared to the damage they could inflict.3 Toward the end of the war kamikaze pilots had mastered the use of terrain to mask their approach on U.S. radars – similar to low-level or sea-skimming flight in missiles today. They would approach from different directions and rapidly converge on suitable targets in waves as large as 300, maneuvering erratically to avoid anti-aircraft fire.4 Consider this description of a kamikaze attack on U.S. ships during the Battle of Okinawa from Robert C. Stern’s book Fire from the Sky:

“The enemy stayed low over the horizon to the west, out of sight of our radars and CAP… For a minute or two, every plane maneuvered for position in all quadrants and then, obviously on signal, a coordinated attack was launched.”5

It has even been argued by naval historian D.M. Giangreco, that just before the end of the war the Japanese discovered that their wooden training planes didn’t show up on U.S. radars – they were essentially stealth weapons.6 Regardless, the Japanese thought the kamikaze squadrons were effective enough that they prepared the bulk of their remaining aircraft – some 10,500 – for kamikaze operations against any future U.S. landing on the Japanese home islands.7

The U.S. Navy responded to this threat with three main approaches. They expanded fleet formations and used destroyers and combat air patrols as pickets – often posting pickets as far as seventy-five miles out from the ships they were protecting. The Navy also employed new technology like radars and proximity-fuzed munitions, and massively proliferated anti-aircraft weapons across its ships.8 According to figures from Giangreco:

And he goes on to note that despite this massive proliferation of point defense weapons, Chief of Naval Operations Admiral Ernest King still considered his ships under-protected.

Together, these three lines of effort blunted the effectiveness of kamikaze attacks and helped defend the carriers and amphibious ships, but at a huge cost to the pickets, and even then, the defense was not impenetrable. Of the 41 ships sunk or damaged beyond repair in the Battle of Okinawa over half were destroyers or other escorts on picket duty and a further ten were minesweepers that had been sent to the picket role because of the high losses the pickets sustained.10 The pickets were effective, but at a huge cost to their crews. This response to kamikaze attacks provides a model for a response to the looming threat of anti-ship missiles. It is the best example of the U.S. Navy enduring a period of heavy and continuous missile salvo-like attacks in support of operations ashore.

The merger of small and medium unmanned surface vessels (S/MUSVs) and extant close-in weapons systems can dramatically increase the survivability of the U.S. surface fleet. The Navy is already calling for the development and fielding of new USVs. The Navy is experimenting with the Sea Hunter MUSV and should be searching for potential roles beyond anti-submarine warfare (ASW).

“…We need to get after [unmanned surface vehicles] so the we can experiment with these to test out the concepts that we believe they are capable of doing, looking at different types of capabilities to put on different types of these vessels…”

But overall, he expressed confidence that they could be the way forward for the surface fleet:

“Down the road if these capabilities prove out to be as effective as some other current manned capabilities then they would start to add to and compliment the manned platforms we have and be part of our battle force.”

In addition to ongoing ASW experiments, another beneficial use would be to mount one or more close-in weapons systems (CIWS) on the MUSV and have them act as pickets for other ships in the fleet. The Phalanx CIWS currently mounted on many U.S. ships is already completely autonomous. It fires a twenty-millimeter cannon at targets based on pre-programed parameters. These new pickets would be completely autonomous and require only human intervention for reloading, refueling, and maintenance. Originally intended as a long-endurance submarine hunter, the Sea Hunter platform would be ideal for picket duty. Autonomous pickets could accompany high-priority ships like aircraft carriers or amphibious ships during strait transits and high-risk movements. They could also defend ship-to-shore movements and beachheads against missiles, aircraft and small surface vessels depending on their programming. These autonomous pickets could also act as surge defense for key naval installations and other key maritime terrain. The point-defense capability that CIWS can provide is also a gap ashore with the Marine Corps. The Phalanx CIWS is a capable and versatile weapon system far better than the twenty and forty-millimeter Bofors guns used against Japanese aircraft and can now be upgraded to carry Rolling Airframe Missiles (RAM) which significantly increase their interception range. It has also been used to protect ships against close flying aircraft, small boats, and drones, further proving its versatility.

Autonomous pickets are not limited to just kinetic weapons. They could integrate directed energy weapons into their defensive capabilities as well, perhaps in a triad with gun and missile point defenses. They would also be ideal platforms from which to deploy softkill countermeasures like chaff, electronic warfare, jamming. They could be mounted with multi-spectrum decoys imitating larger ships to draw anti-ship missiles toward themselves and away from higher-value manned platforms.

Mounting autonomous platforms with defensive systems for force protection side-steps the significant ethical question of lethal autonomous platforms because the precedent has already been set. The Navy has already deployed the autonomous defensive systems like CIWS and Aegis for decades and can modify the engagement parameters  to fit any environment. Pursuing defensive, autonomous weapons for missile defense is a way to continue developing relevant and lethal weaponry without “taking the human out of the loop” for strike operations.

The biggest limitations of the weapons is their relatively short range – the twenty-millimeter cannons are limited to only a few thousand meters, and their limited magazine capacity. But both of these disadvantages can be offset by putting more of them on unmanned platforms further out from the fleet and mixing in missile, directed energy, and softkill countermeasures. Images of U.S. Navy ships late in the Second World War show ships that have anti-aircraft weapons on nearly every square meter of available deck space – and new classes of ships had even more gun mounts yet planned.

There is an inherent risk with the Navy’s classified new operational concept – Distributed Maritime Operations. Distributing combat power can reduce the ability of ships to mutually support each other and increases the risk to the force. More simply put – if vessels that are normally used to escort a carrier are sent farther away they have less of an ability to protect the carrier. The Navy can compensate for this by fielding autonomous picket ships – which are far cheaper than building more conventional vessels both in the initial purchase price and in sustainment costs because they have no crew. This type of lethal yet cheap and potentially sacrificial vessel is also what the Navy needs to compliment the new Littoral Combat Ships which have relatively poor organic defensive capability. USVs will prove key to operationalizing the DMO, and adding them to supplement the fleet precludes the need to add or upgrade the CIWS already mounted. Even a small number of autonomous pickets could be shared among the fleet – always protecting the most at risk assets, whether it be a capital ship, naval facility, or other key objective. Fortunately, there is evidence the Navy already understands the opportunity that is USVs. Defense News reported this week that the Navy has budgeted $2.7 billion for unmanned surface vessels over the next five years but that the Navy doesn’t know “…how it would introduce those technologies into a fleet that has for the most part fought the same way since the Cold War.” Autonomous pickets are one possible way.

In all cases, the ability to form a protective perimeter of unmanned systems beyond the edge of the fleet would significantly boost survivability and increase options for the fleet commander by lowering risk. A flotilla of autonomous pickets, armed with effective CIWS and multi-spectrum missile countermeasures, can function as a powerful yet affordable force multiplier. Such a force would provide the Navy with an increased ability to operate and project power inside an anti-access, area-denial (A2/AD) network and help the fleet weather storms of missile salvos. The methods of how the U.S. Navy adapted to the kamikaze threat in the Second World War provides an excellent case study for this concept and a strong argument for its implementation. As the Navy continues to experiment with new roles and missions for unmanned systems, unmanned force protection and missile defense is an ideal mission.

Walker D. Mills is an active duty Marine Corps infantry officer. He is currently studying Spanish at the Defense Language Institute in preparation for an exchange tour in Colombia. He has previously been deployed to the Western Pacific as part of the Marine Corps’ Unit Deployment Program. These views are presented in a personal capacity.