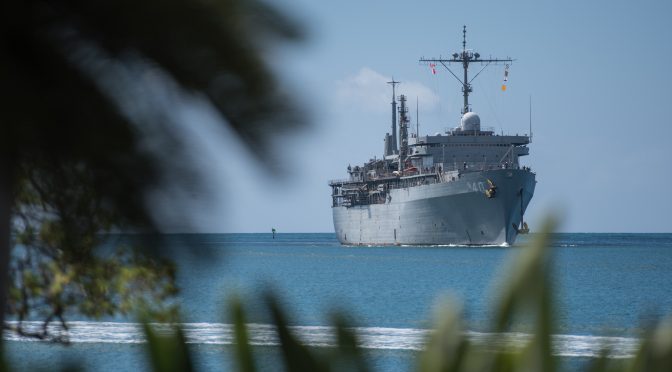 Over the past few years the United States Navy has slowly come to the realization that it must once more prepare to contest control of the world’s oceans, particularly the vast expanse of the Pacific, against peer state competitors. Simultaneously, technological developments have allowed the development of new types of warships, namely unmanned vessels, that will present new opportunities as well as new challenges to the force. Looking to the past, the precedent of the Pacific War, in which fleet tenders provided engineering support to a mobile fleet, suggests a path forward. Basing a support and sustainment model for Unmanned Surface Vehicles (USVs) on 21st century tenders would both fulfill the unique support needs of USVs and help build the ability to fight and deter a war in the Pacific. This analysis will briefly discuss the role tenders played in the Pacific War, why tenders are the ideal model for sustaining USV units, then turn to what modern USV tenders should look like.

Needless to say, the Pacific War began poorly for the United States. Not only was the bulk of the battleship fleet smashed at Pearl Harbor but forward bases in the Philippines also fell to the Japanese faster than expected. The fleet that would ultimately fight its way to the Japanese home islands would have to do so through rapidly constructed forward bases, fleet anchorages, and the constant efforts of fleet auxiliaries. Tankers and supply ships helped extend patrols, but for ships with little ability to repair themselves, engineering support was required.

Here was the role of the tender. In addition to basic sustainment needs, the submarine, seaplane, and destroyer tenders were in effect mobile naval bases, capable of deploying to underdeveloped anchorages throughout the theater. They would conduct practically any repair job short of those that required drydocking, serve as administrative centers for squadrons, and also provided respite from the cramped conditions of smaller warships.1 Rather than steaming back to Pearl Harbor or the West Coast, ships could be based, supported, and repaired just behind the frontlines. This allowed the United States Navy to generate far more presence with far fewer ships than would otherwise have been the case. Tenders helped make up for the early lack of major regional bases, and supplemented the bases that were eventually constructed.

While forthcoming USV designs have little in common with WWII-era submarines, seaplanes, destroyers, and PT boats, all share the relative inability to self-repair underway. Although the lack of crew on an unmanned warship does eliminate some of the constraints that come with providing for humans, it significantly limits the ability of the vessel to endure the accidents and mechanical failures a warship is bound to experience at sea, let alone damage from enemy action.

A tender would provide the operationally flexible engineering support that will be uniquely vital to USVs (and indeed UUVs as well). Being able to turn around a damaged USV from a nearby bay or island saves days lost in transit to regional basing hubs and lightens the load on those facilities substantially.

Indeed, the burden on shore facilities is poised to increase significantly. Looking at the numbers even briefly suggests that with the sacrifice of just two large surface combatants, one could acquire scores of unmanned surface vessels. The Sea Hunter prototype for example costs a reported $23 million dollars.2 Assuming a larger version with integrated weapons would cost between four and five times more, an even $100 million, one could still acquire 16 for the same price as a DDG.3 While the costs of unmanned platforms will vary wildly based on size, mission, and complexity, it is reasonable to expect the costs of such platforms to stay at least one, perhaps two orders of magnitude below those of the large manned platforms the Navy is accustomed to. If certain missions required (or would allow for) small, simple, and expendable single-purpose vessels, it might even be possible to reduce cost per platform an order of magnitude further. Regardless of the exact numbers, if anything resembling these price ratios continues, one should expect quite a number of these types of warships to begin populating the Navy inventory over the course of the next decade or two. The logistical backbone of the fleet must adapt in parallel.

Any large expansion of the unmanned force will thus necessarily increase the demand on existing basing facilities. Even leaving aside space concerns, the increased demand for maintenance facilities and man-hours would be substantial. Rather than concentrating still more sustainment capabilities at two or three major bases, it would be safer, though less efficient in some respects, to concentrate USV sustainment capabilities on tenders that would be able to replenish and affect repairs on the vessels at locations across the theater.4 Rather than rely on existing bases or build new ones to support a large USV force, placing sustainment and repair afloat will both keep USVs ready and do so in an operationally flexible manner.

While such a model might be possible for manned assets, it is uniquely practicable for unmanned platforms. This is because, unsurprisingly, USVs have no crews. There would be no shore leave, no fresh food deliveries, and when not underway unmanned vessels could drift afloat or sit anchored in protected waters, waiting. When routine maintenance is required, the supporting tender could rendezvous with the USV in question, anchor for a few days if needed, and be on its way. Friendly military and civilian ports, bays, atolls, or perhaps even the open seas if conditions permit, all could hold dispersed USVs and their tenders.

Dispersing both the tender and the supported USVs would reduce both the ability and the incentive for adversaries to strike first in a crisis. Rather than present concentrated targets of double or triple berthed warships vulnerable to preemptive strikes, a dispersed force creates uncertainty for potential adversaries.5 Even if one could reliably disrupt regional hubs such as Guam, Yokohama, and Sasebo, a tender and USV force permanently dispersed across the Western Pacific would be hard to locate, let alone reliably strike in an opening salvo. Not only would warships be harder to strike in the first place, distributed logistics would allow those vessels that survived the first wave to stay in the fight indefinitely. The ambiguity this creates in the mind of the adversary is the bedrock of deterrence and a core advantage of distributed maritime operations.

Turning now to the requirements for a modern USV tender, it should first be noted that the reasons given above for a tender sustainment model for USVs hold true regardless of displacement or mission. There will however be substantial variation in requirements for a tender based on the supported platform. One should also note that the Navy currently has two submarine tenders in inventory that were originally commissioned in the 70s. These vessels however are allocated to an existing mission and will be retired in 2029 and 2030, respectively.6

All notional USV tenders would require engineering spaces capable of the traditional welding, fabrication, and machining functions of the tender. New 3D printing technologies would ideally save space and increase efficiency, but the degree of utilization would depend more on the design of the tended than the tender. There should also be substantial flexibility and a slight overcapacity in facilities that would provide a degree of future-proofing, allowing the tender to support a range of rapidly evolving USV designs. Additionally, if a tender model of sustainment were adopted, future USV designs should take the capabilities of tenders into account and use parts and materials that would allow for rapid repair and replacement by these vessels.

As for variation based on USV type, larger unmanned platforms would probably require support much closer to that provided by existing submarine tenders while emphasizing the capability to perform such duties at a broad range of locations. These vessels should be expected to conduct all maintenance short of drydock work, keeping a large number of deployed, patrolling vessels ready for combat. In the Pacific War, a dozen or more vessels were supported by a single tender.7 Unless testing shows that the unmanned nature of large USVs radically changes the rate at which they will require maintenance, a similar ratio, if somewhat lower, should be expected. Additionally, given the relatively large volume of these vessels, carrying fuel or weapon reloads for more than a handful would probably necessitate either excessively large tenders or frequent replenishment of the tender itself. Thus, these types should be refueled and rearmed through the traditional methods, primarily oilers and ports, rather than trying to push these capabilities onto the tender. The large USV tender would also be required to reposition periodically, both to support a broadly dispersed force and to avoid easy targeting. While it would need the internal fuel to conduct frequent repositioning, the vessel itself need not be exceptional in terms of speed or self-defense.

Medium and small USV tenders would behave differently. These vessels should act more like a mothership than a floating maintenance facility. Given the smaller displacement of the vessels supported, replenishment would be both more feasible for a tender of reasonable displacement, as well as more regularly required. Support would likely be required somewhat further forward, probably more frequently at austere locations than the larger USV tender, and potentially in areas of elevated risk. Additionally, rearming and refueling may be a function of the small or medium USV tender. A handful of ASW torpedoes or small anti-ship missiles are easier to store and reload than even a small VLS bank. The shallower the magazine, the lesser the combat endurance of the platform. One might expect a large USV to go through an engagement or two without requiring rearming; a fast attack craft on the other hand, for whom a single salvo is its entire armament, becomes immediately combat ineffective after a single engagement. Rapidly turning around vessels such as these is essential to wringing as much combat power as possible from them. Finally, one can expect less redundancy on smaller vessels. Thus, the ability to rapidly repair and rearm, potentially far forward, will be all the more important for vessels tasked with tending these types. As for the tenders themselves, speed would be more important for vessels expected to maneuver closer to the enemy and basic self-defense weaponry would be advisable.

While the large-scale introduction of Unmanned Surface Vehicles will create problems for adversaries, it also creates logistical problems for the U.S. Navy. Rather than grafting a growing number of USVs onto the existing logistics infrastructure in the Pacific, adopting a tender model to support this force would better suit the platform and create a more agile, present, and lethal fleet. Whether tenders are large or small, ducking in and out of archipelagos to rearm small craft or conducting maintenance at unimproved anchorages, a reintroduction of the tender is needed to support emerging USVs.

Griffin Cannon is a budding navalist and graduating senior from the University of Notre Dame’s Security Studies program. He has interned with the Hudson Institute’s Center for American Seapower in previous summers and will be working at the National Defense University’s Eisenhower School this upcoming fall.

6. The Navy’s 30-year shipbuilding plan (FY 2020) states that the AS vessels will be replaced with an AS-(X), potentially a variant of the Common Hull Auxiliary Multi-Mission Platform (CHAMP). While such a move would be advisable, replacing on a one for one basis creates no excess capacity to support a growing USV force, at least certainly not in the manner described in this article.