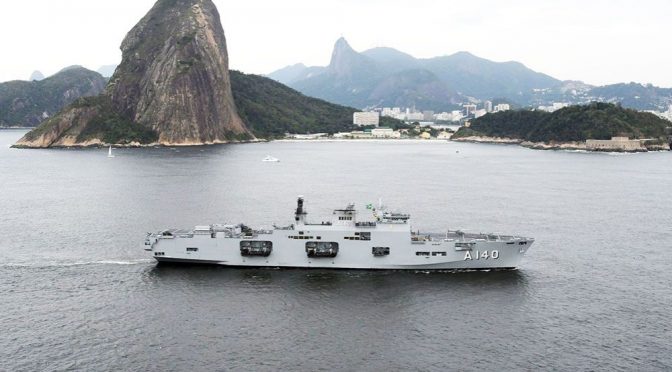 Brazil’s new helicopter carrier, PHM Atlantico (A 140), docked in Rio de Janeiro on 25 August 2018 after sailing across the Atlantic Ocean from Plymouth, United Kingdom, its former home. The vessel is the new pride and joy of the Brazilian Navy. However, apart from possessing an imposing appearance, how is this vessel useful to Brazil?

Atlantico was formerly known as HMS Ocean (L 12), an amphibious assault ship that belonged to the British Royal Navy. It was commissioned in 1998 and decommissioned earlier this year. The Brazilian government purchased it for 84 million British pounds. Among its characteristics the vessel displaces 21,000 tons, has a length of 203 meters, a max speed of 21 knots, and a range of up to 8,000 miles. According to the Brazilian Navy, the vessel is equipped with four 30mm DS30M Mk2 guns, two 1007 radars, one 1008 radar, and one Artisan 3D 997 radar. Atlantico transports a crew of 303 with only one female naval officer, Captain Márcia Freitas, chief of the vessel’s medical department. The ship can also transport as many as 800 marines. “It’s a new ship, in good condition. It can be operational for 20 to 30 years,” declared Brazilian Admiral Luiz Roberto Valicente to the Brazilian daily Estadao.

Atlantico can transport as many as 18 helicopters, but it is still unclear which type of aircraft the Brazilian Navy will deploy aboard its new vessel. On 5 September, the Brazilian aerospace company Helibras, a division of Airbus, tweeted a photo of H225M helicopters landing on the deck of Atlantico, hinting that these types of aircraft could be deployed on the new carrier. Additionally, the Estadao article declared that the carrier is compatible with all the models of helicopters currently operated by the Brazilian Navy.

Why Does Brazil Need a Carrier?

The standard explanation out of Brasilia for the purchase of the helicopter carrier is that it will help protect Brazil’s exclusive economic zone, which is rich with maritime resources such as fish and oil deposits. Moreover, in an interview with the Brazilian defense news website Defesanet, Capitan Giovani Corrêa, commander of Atlantico, explained that with the addition of the carrier, “the Navy will have a platform with dissuasive capabilities [which will help the] control of vast maritime areas…will help maintain security in the South Atlantic and…will protect Brazil at the international level.”

The statement about “dissuasive capabilities” raises the question of which nation could possibly attack Brazil in the first place. The country last fought an inter-state war when it deployed an expeditionary force to Europe to fight alongside the Allies during World War II. Even more, when it comes to conflicts with neighboring states, the last war that Brazil participated in was the Acre War (1899-1903) with Bolivia.

Additionally, it is important to mention that Latin American geopolitics are fairly stable these days (the situation in Venezuela notwithstanding), which means that the rest of the region does not view Brazil’s recent acquisition, or its similarly ambitious submarine and corvette programs, with concern. In other words, there have been no apparent moves by regional navies to upgrade their own defenses in response to the acquisition of Atlantico. Latin America is not experiencing an arms race these days and Brasilia’s relations with its neighbors are fairly cordial, which effectively rules out the hypothesis of a regional state attempting to obtain control of Brazilian waters by force.

Thus, apart from patrolling Brazil’s territorial waters looking for non-traditional threats (such as illegal fishing, drug trafficking, or piracy), what other duties will Atlantico perform? In the aforementioned interview, Captain Corrêa suggested the carrier could be used to support humanitarian operations and as a command and control center for a task force. This raises the hypothesis that the ship could be deployed to United Nations peacekeeping operations. One likely candidate is the UN Interim Force in Lebanon, which has a naval component, the Maritime Task Force. Brazil regularly deploys a vessel to this naval force – the current ship there is the frigate Liberal (F 43). Hence, Atlantico could similarly be deployed to the Mediterranean to serve as a command center, should the task force attempt to carry out a major operation there.

Finally, and perhaps most importantly for Brasilia, Atlantico will give the Brazilian Navy true blue water capability. That was the main purpose of the previous carrier, Sao Paulo, but the vessel spent more time docked and undergoing repairs than at sea, so hopefully for Brazil, Atlantico will perform much better.

The acquisition of the helicopter carrier Atlantico, alongside the PROSUB submarine program and the Tamandare corvette program, are examples of the Brazilian Navy aiming to become a true blue water navy in the 21st century. Domestically speaking, Brazil has little to fear about a conflict with a neighboring state, but Atlantico, should it perform better than its predecessor Sao Paulo, will be of great help to project the image of the marinha do Brasil well past the South Atlantic.