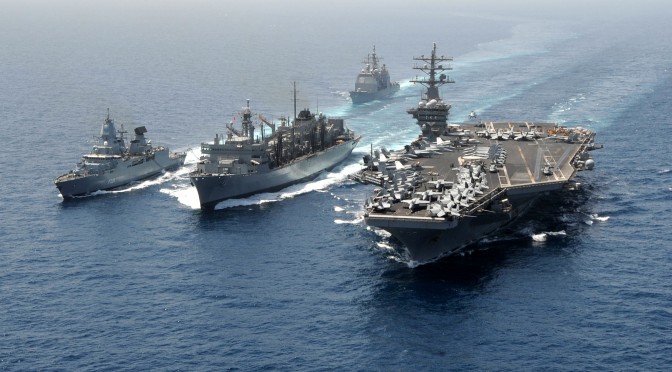 The following article is adapted from a recent Journal of Military and Strategic Studies publication entitled “The combat utility of the U.S. fleet aircraft carrier in the post-war period”

Former U.S. president William Clinton once said that whenever a crisis breaks out, the first question that comes to everyone’s mind would be “Where is the nearest carrier?” In the half century after World War Two, Washington employed force in response to some 200 crises, and carriers were involved in two-thirds of them.[1] On the other hand, the U.S. Army and U.S. Air Force (USAF) were involved in 38 and 53 of these incidents respectively.[2]

This contrast came about because the large-deck carrier of the United States Navy (USN) offered a number of unique advantages over other combat platforms. Esteemed naval analyst Norman Polmar said: “(The) survival of the aircraft carrier… can be attributed to… territorial independence, flexibility of striking power, (and) mobility.”[3] These three attributes will be explored in this article.

During times when defense spending is tight and when different branches of the American military vie for the budgetary pie, the aircraft carrier would often be subjected to criticism by other services, especially the Air Force. This is because the vessel is deemed to be a major competitor for scarce resources, owing to its high price tag and a perception that it is taking over some USAF roles. Nevertheless, even some of the harshest critics of the USN have begrudgingly alluded to some advantages unique to the carrier, the most important of which is arguably the territorial independence that allows it to conduct operations unconstrained by political limitations.

For instance, General Ronald Fogelman, the USAF Chief of Staff from 1994 to 1997 and who was known to be a fierce critic of USN expenditure, was cognisant of this attribute when he said: “Aircraft carriers give you the ability to sail into a littoral region and not have to worry about diplomatic clearance… The… crisis during Taiwan’s elections… was an ideal use of… carriers.”[4]

A U.S. carrier strike group, with its own logistical infrastructure and force-projection capabilities, makes an ideal tool for intervention. This is especially so in cases where American interests are not aligned with those of allies, and this could result in Washington not having access to air bases.[5] The carrier’s territorial independence would thus come in handy if local issues were to make it difficult for land-based airpower to be deployed.

A related issue is that of friendly air bases being attacked. According to a RAND report, the U.S. has 28 major air bases on the geostrategically and economically critical Eurasian landmass.[6] Although land bases are closer to potential hotspots, they are also closer to likely adversaries and could be targeted more easily during a conflict, making them more vulnerable than carriers. As a USN officer maintained: “I can’t tell you where… our carriers are… but given a few moments of research at Base Ops, I can give you the coordinates of every Air Force runway… and hangar worldwide.”[7] The proliferation of missiles and their enabling systems such as satellites in the post-Cold War period has led to several nations gaining the capability to target U.S. bases.

Indeed, this threat has become more serious with the advent of more advanced weapon technologies in recent years. This is arguably why Washington is realigning forces from Okinawa to Guam and setting up a new Marine contingent in Australia – to hedge against American forces in north-east Asia being targeted by China’s A2/AD systems during a conflict.[8] There have been no studies that do not acknowledge the vulnerabilities of land bases to anti-access threats; furthermore, even the most optimistic of such reports.[9]

Equally troublesome for America in times of crisis is the refusal of nations to grant over-flight [10] and aircraft deployment rights – an issue which the carrier does not face. The denial of over-flight rights to land-based aircraft could complicate Washington’s strategy. During Operation El Dorado Canyon, France, Spain, and Portugal denied over-flight rights to U.S. aircraft; consequently, the USAF F-111 Aardvarks involved had to be refueled in mid-air several times, a problem not faced by the carriers involved in the same operation as the ships were situated contiguously in the battlespace.[11]

As for the constraint of needing political clearance before U.S. aircraft can operate from foreign bases, a 2013 study contended that: “The attitude of host countries… is difficult to predict, raising… uncertainties regarding the basing of aircraft. The United States can bring enormous pressure to bear on a host country to accept U.S. forces, but success… cannot be guaranteed.”[12]

Examples abound of allies being hesitant or unwilling to allow U.S. aircraft to operate from their territory. Even when Iraq was poised to invade Saudi Arabia after taking over Kuwait in August 1990, the House of Saud hesitated before it permitted coalition forces to be deployed on its soil.[13] Similarly, the USAF could not operate out of Saudi Arabia and Turkey for Operation Desert Strike[14], leading a USN official to comment that the air force had been “castrated.”[15] He then extolled the territorial independence of the carrier in this instance: “With an aircraft carrier, you get 4.5 acres of Americana with no diplomatic restrictions.”[16]

The phallic reference may sound exaggerated, but it was a fact that American land-based airpower was effectively emasculated when it could not operate out of its Middle Eastern bases for Desert Strike. All in all, American carriers have proved to be useful for their territorial independence. This characteristic – combined with their mobility – essentially allows them to act as “first responders” to any situation.

Our ability to deliver… firepower and generate… high aircraft sortie rates can… impact on… a conflict… during the critical early period of a joint campaign, when… U.S.-based forces are just starting to arrive in theater. – Admiral Jay Johnson, U.S. Chief of Naval Operations from 1996 to 2000.[17]

Owing to their mobility, U.S. carriers are usually the first assets to be deployed to a hotspot. This attribute has made one analyst describe the USN, and for that matter its carriers, as “the… little Dutch boy… (who) can hold a finger in the dike until reinforcements – the U.S. Air Force, U.S. Army, and allied forces – are in place.”[18]

When the deployment order comes, a carrier group moving at even a moderate speed of 25 knots can cover a significant 600 nautical miles in 24 hours of continuous steaming. To illustrate, a U.S. carrier group near Guam moving at that speed would take just over two days to reach the vicinity of Taiwan in the event of a Taiwan Strait crisis.[19] Suffice it to say that it would reach there even sooner at a higher speed.

The mobility that enables a carrier to act as a first responder was manifested as early as the Korean War. From the invasion of South Korea by the North in June 1950 until the Inchon landings in September, American and British carriers provided the sole tactical aviation assets as the number of South Korean-based aircraft was small and the USAF platforms in Japan were too short-ranged to have significant loiter time over targets.

In a more recent conflict, during the 1990 Gulf crisis, Army General Norman Schwarzkopf said the Eisenhower and Independence battle groups were in range of Iraqi targets within 48 hours of the deployment order being given, adding that: “The Navy was the first military force to respond… and… was also the first airpower on the scene. Both of these deterred, indeed, I believe, stopped Iraq from marching into Saudi Arabia.”[20]

To get such a glowing assessment from a top officer in a rival service undoubtedly attests to the carrier’s unequalled utility in responding first to a crisis. In addition, the aforementioned carriers provided air cover for the deployment of equipment to Saudi Arabia since viable shore-based offensive airpower was available only three weeks after the crisis broke out.[21] Had Iraq invaded Saudi Arabia within this period, the two U.S. carriers on station would have been even more crucial as they were the only assets in theater that could take the fight to the enemy.

Another inherent advantage offered by the carrier to U.S. theater commanders is that it can conduct a wide variety of operations because of the different types of aircraft embarked on it. To be sure, land bases can accommodate a wide range of aircraft as well, but they simply lack the unique attributes of territorial independence and mobility offered by the large-deck carrier as discussed earlier. The typical carrier air wing (CVW) today consists of 44 F/A-18 Hornet/Super Hornet fighters, five EA-18 Growler electronic warfare aircraft, four Hawkeye airborne early-warning platforms, and 19 MH-60 Seahawk helicopters.[22] Indeed, during its 50-year service from 1962 to 2012, USS Enterprise operated 43 types of aircraft.[23]

This ability to accommodate diverse aircraft enables the carrier to carry out a wide range of missions. This was evidenced during Operation Deliberate Force when carrier planes participated in the whole gamut of operations: close air support, search-and-rescue, and enforcement of the no-fly zone. Because the carrier is such a large platform, it can integrate assets from other services, even other nations, into its operations.

This is crucial with today’s emphasis on jointness between the American armed services, and interoperability between Washington and her allies. In the current combat environment characterized by fluidity, the capabilities needed in one region or situation may not be the same as another, and thus why the ease of modifying the CVW is useful. [24] To illustrate, during Operation Uphold Democracy[25], USS America and USS Eisenhower carried elements of the 160th Special Operations Aviation Regiment and the aviation component of the 10th Mountain Division, the ship’s organic air wings having being temporarily removed.

The carrier has proved to be an extremely useful platform for the U.S. National Command Authorities, but it must be noted that the deployments delineated above occurred where anti-access threats were at best marginal. In an anti-access/area-denial environment, would the carrier be given carte blanche to project its airpower? Would its survivability be seriously questioned by the submarine and other anti-ship systems? These are but some of the key questions shaping the debate over the utility of the aircraft carrier, and my full article addresses some of them.

Read the full publication here: “The combat utility of the U.S. fleet aircraft carrier in the post-war period.”

Ben Ho Wan Beng is a Senior Analyst with the Military Studies Programme at Singapore’s S. Rajaratnam School of International Studies, and he received his master’s degree in strategic studies from the same institution. Ben is a CIMSEC member and has published with the likes of The Diplomat, The National Interest, and Real Clear Defense.

[10] It must be noted that this point applies only to states contiguous to the sea where the carrier is deployed; overflight rights are still needed for aircraft seeking to reach countries situated landward of a coastal state.

[14] Operation Desert Strike was initiated by the United States in September 1996 in response to the Iraqi military offensive against the city of Irbil in Iraqi Kurdistan.

[19] According to the author’s calculation, at 25 knots, it would take some 52 hours to cover the     distance of about 1,300nm between Guam and the waters off eastern Taiwan, which is derived from Google Maps.

[25] This was the 1994 intervention in Haiti to remove the military regime installed by the 1991 coup overthrew the elected President Jean-Bertrand Aristide.