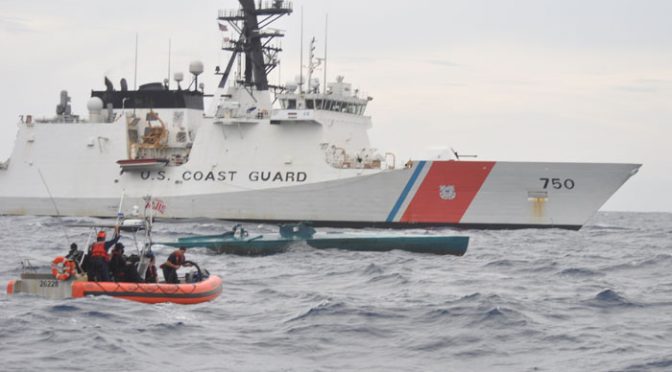 This article originally appeared on the Small Wars Journal, and has been republished with permission. You can read it in its original form here.

By  Byron Ramirez and Robert Bunker

During recent months, media outlets have dedicated special coverage to the latest narco submarine seizures carried out by the U.S. Coast Guard and other partner agencies.  In our 2015 Foreign Military Studies Office report, Narco-Submarines: Specially Fabricated Vessels Used for Drug Smuggling Purposes, we discussed the strategic implications associated with this innovative method of transporting narcotics. We explained that narco submarines originated in the early 1990s and have been used since then as an alternative to other less covert methods of distribution. Over time, narco submarines’ design, features, and technical capabilities have continued to evolve. This advancement in technology has certainly presented challenges to law enforcement authorities and militaries. Nonetheless, in spite of the evolution of narco submarine technology, the U.S. Coast Guard and U.S. Navy have developed their own sophisticated set of technologies which allows them to improve their ability to detect and capture these vessels.

Who: Drug cartels, especially many based in Colombia, manufacture narco submarines.

What: Narco submarines are used to transport narcotics from Colombia to other countries in Central America as well as Mexico.

When: This method of distributing narcotics became more prominent around the year 2006. A larger number of narco submarines have been seized since around 2007, mostly in the Pacific Ocean, with a smaller number in the Caribbean Sea. [1]

Where: Drug traffickers have used mostly low profile vessels (LPVs) to transport narcotics from Western Colombia and Northwest Ecuador to Central America, frequently via the Pacific Ocean. The majority of these vessels travel past Panama, Costa Rica, and Nicaragua, and often are intended to reach other countries in Central America as well as Mexico, where their merchandise is then collected and re-routed to other destinations via other delivery methods.

Why: Because of their technical features and low profile design characteristics, narco submarines allow drug traffickers to reduce the risk of detection and seizure. Although there have been several confiscations, it is believed that many of these vessels continue to travel undetected and ultimately reach their intended destinations.

Incident 1: On June 2, 2015, the USS Kauffman [FFG-59] seized 582 kg. of cocaine from an Ecuadorean semi-submersible that was traveling in the Pacific Ocean. The vessel was intercepted near Guatemala. The three crewmen included two Ecuadoreans and one Colombian. [2] A later article placed the seizure at 779 kg with a street value of USD$15.5 million. [3]

Incident 2: On July 19, 2015, the U.S. Coast Guard Cutter Stratton [WMSL 752] intercepted and captured a 40 foot long, semi-submersible, low profile vessel in the Pacific Ocean which carried more than 16,000 pounds (over 6 tons) of cocaine.  According to reports, the seized narcotics are worth more than USD$180 million wholesale. This represented the largest seizure of its kind in U.S. Coast Guard history at the time. The vessel was detected by U.S. Navy maritime patrol aircraft in international waters about 200 miles south of Mexico. CBS reports that the same U.S. Coast Guard crew which intercepted this vessel has also intercepted 15 other drug smuggling vessels since April 2015, and has seized over 33,000 pounds of cocaine worth over USD$540 million since May 2015. [4] 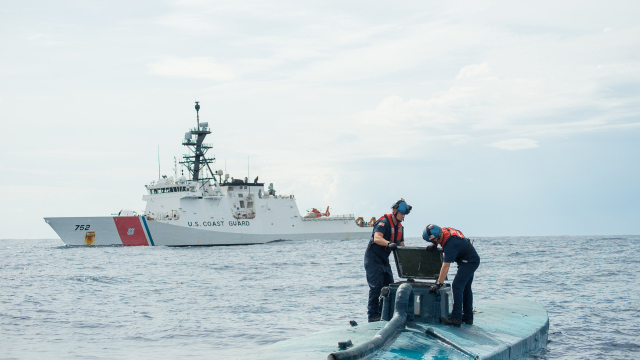 See the 3:31 Minute Coast Guard Video of this Incident

With respect to this same narco submarine seizure, The Washington Times [5] reported:

“Our extremely efficient and experienced aircrews are fully engaged in protecting the United States’ maritime borders from all threats including those posed by drug trafficking organizations,” said Director of National Air Security Operations Center — Jacksonville Robert Blanchard. “Our collaborative interagency partnerships and long-range tracking capabilities allow us to interdict dangerous vessels before they reach our coastal borders.”

“The July effort (interdiction) marked the second time that the (U.S. Coast Guard Cutter) Stratton had stopped this type of narco-submarine in a two-month span. In June, the Stratton crew also stopped a submersible carrying 5,460 pounds of cocaine.”

Taking part in this July 19 interdiction was the U.S. Navy, U.S. Coast Guard, and the U.S. Customs and Border Protection (CBP) Office of Air and Marine (AMO). This joint operation off the coast of El Salvador shows the collaboration taking place across agencies to thwart drug trafficking operations. [7]

Incident 3: On August 31, 2015, the U.S. Coast Guard seized yet another semi-submersible in the eastern Pacific Ocean. This particular seizure by the USCG Bertholf [WMSL 750] represented nearly 15,000 pounds of cocaine. The vessel was 50 feet long and carried a 4 person crew. It is estimated that the value of this shipment, which was captured west of Mexico, is approximately USD$227 million. The vessel was spotted by U.S. maritime patrol aircraft and intercepted by two long-range U.S. Coast Guard interceptor boats. [8]

Incident 4: In September 2015, Colombia’s navy captured a semi-submersible that was being prepared to be launched into the Pacific Ocean. According to the official report, the vessel was 12 meters long, 3 meters wide, and could carry 5 tons of narcotics. It is believed that this vessel was built by FARC in the southwestern region of Colombia. [9]

As we indicated in our 2015 FMSO report, low profile vessels can mask their heat signature, evade sonar and radar, and use lead siding to help mask their infrared signature. These particular technical aspects make their detection and capture exceedingly difficult and have forced law enforcement authorities to design their own technology and methods that counteract this technological race.

The U.S. Coast Guard has increased its technological capabilities as it attempts to intercept drug running vessels in both the Gulf of Mexico and in the Pacific Ocean. The Coast Guard is collaborating with the U.S. Navy and other agencies as well as utilizing military surveillance aircraft and nuclear fast attack submarines to search for narcotics carrying vessels. The Coast Guard has also been using HC-130 Hercules aircraft which provide surveillance and tracking of drug trafficking vessels in the Pacific Ocean. [10]

The U.S. is also working through the Joint Interagency Task Force (JIATF) South, a component of SOUTHCOM composed of multiple federal and partner nation agencies and military forces. Together, these agencies carry out detection and monitoring operations and share information that supports law enforcement interdictions of illicit trafficking. [11]

It is difficult to determine how many drug carrying vessels are currently being deployed and which specific routes they are using. Drug traffickers realize that there are risks involved with these operations, yet they consider captured vessels as a cost of doing business. In spite of the interdictions to date, we can suppose that drug traffickers continue to use this transportation and delivery method as it continues to yield high profits even when seizures are factored into the cost-benefit analysis.

The efforts carried out by the Joint Interagency Task Force (JIATF) South, including the U.S. Coast Guard and the U.S. Navy, must continue to reconcile the complexity of the challenges presented by evolving narco submarine technology and the ingenuity of drug trafficking organizations.

Collaboration and communication between law enforcement agencies and militaries are imperative to improving the efficiency and effectiveness of ongoing interdiction efforts. Although detection and monitoring technology have improved, this alone is not sufficient. In order to more accurately disrupt drug trafficking operations, governments and their law enforcement agencies must improve their exchange of intelligence and share best practices that enable them to adjust to the dynamic counter actions introduced by drug traffickers.

[5] Douglas Ernst, “‘Narco-submarine’ with 8 tons of cocaine seized by U.S. off in the eastern Pacific Ocean.” Washington Times. 23 July 2015,http://www.washingtontimes.com/news/2015/jul/23/narco-submarine-8-tons-cocaine-seized-us-coast-el-/

[6] Sarah Larimer, “Why the Coast Guard calls narco-submarines the ‘white buffalo’ of the seas.” The Washington Post. 10 August 2015, http://www.washingtonpost.com/news/morning-mix/wp/2015/08/10/why-the-coast-guard-calls-narco-submarines-the-white-buffalo-of-the-seas/

Dr. Byron Ramirez is a researcher and analyst who specializes in international political and economic affairs.  He completed his PhD in Economics and Political Science at Claremont Graduate University and holds an MA in Economics, a MS in Management, and an MBA.  His areas of research include geopolitics, international affairs, globalization, economic and social development, and illicit economies. His most recent publication is the co-edited work Narco-Submarines Specially Fabricated Vessels Used For Drug Smuggling Purposes. Fort Leavenworth, KS: U.S. Army Foreign Military Studies Office.

Featured Image: A Coast Guard Cutter Bertholf boarding team aboard an Over the Horizon Long-Range Interceptor boat approaches a self-propelled semi-submersible vessel suspected of smuggling 7.5 tons of cocaine in the Eastern Pacific Ocean, Aug. 31, 2015. The seized contraband is worth an estimated $227 million. (U.S. Coast Guard photo)