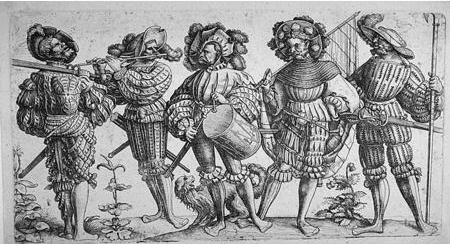 Over the course of the last decade or more, scholars and pundits have debated the feasibility and legality1 of employing private military contractors2 (“PMCs”) in lieu of uniformed American military forces. What follows will be a two-part post looking at the historical antecedents and contemporary problems with mercenaries.

I. Historical View of Private Warfare

Mercenaries long predate modern PMCs. Perhaps the best known example from European history is the condottieri, the soldiers for hire who would fight for one prince or another as their paymaster dictated. One well known Florentine had quite a bit to say about condottieri, blaming them for failing to defend Italy against the invading French led by King Charles in the late fifteenth century. He explains the underlying problem:

“if a prince holds on to his state by means of mercenary armies, he will never be stable or secure . . . . Mercenary captains are either excellent soldiers or they are not; if they are, you cannot trust them, since they will aspire to their own greatness . . . but if the captain is without skill, he usually ruins you.”3

Nevertheless, the title condottieri lives on today as part of a PMC trade name.4

Mercenary soldiers in America predate the republic itself. Hessian soldiers were famously dispatched from their German homeland to fight George III’s war against the rebellious colonists. This use of mercenary force was such an affront to the political wing of the Continental resistance that it declared King George had transported “large Armies of foreign Mercenaries to compleat [sic] the works of death, desolation and tyranny, already begun with circumstances of Cruelty & perfidy scarcely paralleled in the most barbarous ages, and totally unworthy the Head of a civilized nation.”5 Having fought the “large Armies of foreign Mercenaries” himself, George Washington echoed Machiavelli and “warned that ‘Mercenary Armies . . . have at one time or another subverted the liberties of almost all the Countries they have been raised to defend.’”6

The American Civil War saw its share of the private hiring of soldiers, albeit not in a classic mercenary context. Previous mercenaries like the condottieri and Hessians were complete units that would be hired to go into combat as a unit. The Enrollment Act of 1863 established a draft for military service, and permitted conscripts to hire a substitute, a person who, for a fee, would take that draftee’s place, allowing the paying customer to avoid the draft.7 The Civil War system of substitutes kept the essence of the mercenary relationship—soldiers for hire, paid under a private agreement to fight—but these were retail, rather than wholesale mercenaries. Although the draft was reinstituted for several decades of the 20th century, it is telling that the substitute system was never reintroduced.8

Privateers Profiting from War at Sea

The profit motive once enjoyed a prominent if relatively small role in American military power. At the founding, Congress was (and arguably still is) empowered to issue letters of marque and reprisal.9 While no match for a ship of the line, privateers were effective at least as an irritant to British commerce during the revolution.

A privateer was not a pirate because a sovereign nation issued a letter of marque allowing the privateer to take the enemy’s commercial vessels and keep them as prizes.10 Perhaps surprisingly to a modern audience, the earliest versions of American prize law even allowed American naval officers to retain some of the proceeds of prizes taken by commissioned American warships.11 That profit motive is no longer on the books.12

Even so, private, for-profit companies like Blackwater (now Xe), Triple Canopy, and others have provided contract military and related services to the United States. While proponents will point to their successes and opponents point out failings, their efficacy or lack thereof is beside the point. America should not use mercenaries because it distorts the relationship between an elected government and the people by privatizing inherently governmental services.

With this predicate the next post will examine more closely contemporary problems with mercenaries and war for profit.

2. The term “contractor” or “military contractor” has been long used in defense circles to encompass much more than the subset of commercial mercenary armies, to include private people and entities of all kind providing goods and services to the DOD under a contract, differentiating “government contractors” from civilian government employees. Take, for example, Edward Snowden, widely and properly reported to be an NSA contractor at the time of his heroic and/or infamous acts. For purposes of this piece “contractor” will be used in the narrower sense of armed private forces, and interchangeably with PMC.

8. While the availability of deferments during Vietnam was much debated and reeked of much of the same inequality as directly hiring substitutes, the deferment process at least had the sparing virtue of eliminating private commercial transactions from the process.

9. U.S. Constitution, Article I § 8. The arguable part comes from international treaties and state practice—or rather, lack of practice.