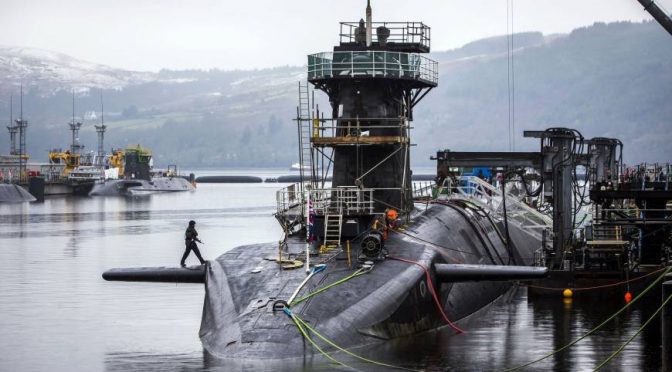 In a historical turn, the 2018 National Security Strategy (NSS) of the United States asserts that the world is returning to an era of great power competition. The 2018 NSS explicitly states that “after being dismissed as a phenomenon of an earlier century, great power competition has returned.”  World history is a landscape of consecutive great power competition for hegemony and as the great navalist Alfred Thayer Mahan showed in his book The Influence of Sea Power Upon History, the one who commands the seas is the one who imposes the rules of the sea (most of the time at least). Even though the Mahanian term “Command of the Seas” is rather an ideal condition, in the real world we could substitute it with the term “sea control’’ which describes a temporary1 condition existing in a particular maritime area where one has freedom of action to fulfill goals and purposes.2 Sea control is a condition and a necessary operational function to achieve strategic goals.

Whatever character naval warfare takes on in the future sea control will always be the key to success. Being so essential one should understand its principles in order to gain sea control, but history abounds with cases where nations succeeded or failed. Some of those who initially failed were able to readjust their doctrines in time (and consequently their capabilities) to gain sea control and win.

The First World War revealed the insufficiency of the Mahanian doctrine (and thus the capabilities of the U.S. Navy), to fulfill U.S. strategic objectives. A doctrine designed to win a decisive battle in the Caribbean had resulted in building a fleet of heavy battlecruisers quite improper to gain sea control in the Atlantic Ocean dominated by German submarines. This resulted in an inability to protect sea lanes through which supplies were transported to European allies. The improvidence of Mahanian doctrine to anticipate the nature of the future war at sea (attrition instead of decisive battle) and mainly the inability to foresee the vital role that a new technological asset had (the submarine instead of big-gun warships), were the causes of the gap between ends and means. However, the U.S. realized this in time and procured lighter combatant crafts such as destroyers which were  more suitable units to assert protection of sea lanes, escort supply transport vessels, destroy enemy submarines, and finally to acquire sea control in a new context.

Just concluding that sea control is a dependent variable of proper capability is not new. But what does proper capability mean? Capability can be defined as the means that enable a Navy to fulfill strategic objectives, adjust to the particular demands of the operational environment, and encounter all possible expected threats.

The case of WWI highlights the dramatic influence that new technologies have in the ability to gain sea control. The introduction of submarines, aircraft carriers, and naval air forces expanded the physical dimensions of war at sea to include air and undersea domains. This in turn changed the number and the quality of threats a navy could encounter. A robust reform of existing doctrines was introduced and subsequently new capabilities for the fleet were required. The successful use of sea power has now come to be regarded as the best method of distributing capabilities and tactics across domains. A major consideration for gaining sea control during war was the quick adjustability of capabilities and tactics to operational conditions. However, changing tactics and tools in the midst of war will be difficult in the modern threat environment. That means that the planning of the fleet during peacetime is very critical.

Littorals (green/brown waters) rather than high seas (blue waters) are expected to be more essential in future maritime conflicts. They may feature anti-access strategies using mines,3 land-based precision guided munitions (of extended range or/and ballistic), diesel submarines,4 Special Forces, electronic warfare, space systems and cyber operations. As advanced capability proliferates, traditionally less powerful states in the littoral will be able to pursue sea control and sea denial in ways they have not been able to before.

In order to balance asymmetries in military power, states that feel weaker are also expected to use terrorist networks, criminal groups and/or state-incited paramilitary groups equipped with low cost but of high effectiveness light arms. They will also attempt hybrid tactics, exploiting high technological means (smart mines, cyber-attacks) and simple tactics (suicidal bomb attacks, old fashioned guided weapons) which base their success in the inability of the defender to deter attacks. The same effect is caused in complex geographic environments like littorals, island clusters, and archipelagic waters.

Considering all abovementioned threats and characteristics of the international environment we need to procure fleets with proper capabilities to enable their successful response. Even though the ability to respond to advanced threats emerging in tactical level is essential however these capabilities should include the consideration that sea control operations are not just a summation of hard power but they should simultaneously shape a conducive strategic environment in which military acts will follow in a more favorable context. At the strategic level, executing information operations of an honest nature to further a narrative that legitimizes military acts to internal or international audiences, especially with respect to preserving international law.

Great powers could be questioning world order in the context of command of the seas. At sea this strategy is manifested by arbitrary interpretations of international law which (in many cases) attempt to negate freedom of navigation, by planning anti-access policies and/or provoking small scale crises to achieve political ends. International law is expected to exert vast influence (more than any other time in history) on rules of engagement and wartime conduct, especially in areas replete with commercial shipping and civilian crews. As a result this will limit freedom of action to operational commanders. Military actions should always take into consideration international law so as to assert the legitimacy of their actions.

In the operational level, executing legal warfare will be important to secure the legitimacy of military actions during war or crisis. Certain situations could limit or affect commanders’ decision-making procedure, for example when trying to clarify if existing assets are paramilitary groups such as maritime militia or genuine non-combatants. Legal confusion with respect to using force may result in civilian casualties which would then create undesirable legal and diplomatic consequences.

To conclude, sea control is the ultimate criterion that should be fulfilled in order to achieve strategic aims in and through the maritime environment. Although sea control is a military concern, it would be wrong to regard it as a bare result of military power and neglecting the realm of law or public opinion. New threats, new conditions, and new courses of action by opponents require fresh responses and capabilities. Rapid adjustability to the conditions, to the specific threats, and to the environment of operations should blossom as an organizing principle of naval planning.

[1] For a predetermined time.

[2] The highest level of Sea Control is to deny (the opponent) access in a particular area.

[3] As a retardant factor to time intensive operations / tasks.

[4] Advanced diesel electric submarines present the most challenging proposition due to their numbers and propensity to operate near or in littorals.

Featured Image:  The Vanguard-class submarine HMS Vigilant, one of four Royal Navy submarines armed with Trident missiles, is seen at Naval Base Clyde, also known as Faslane, in Scotland in January. (AP)