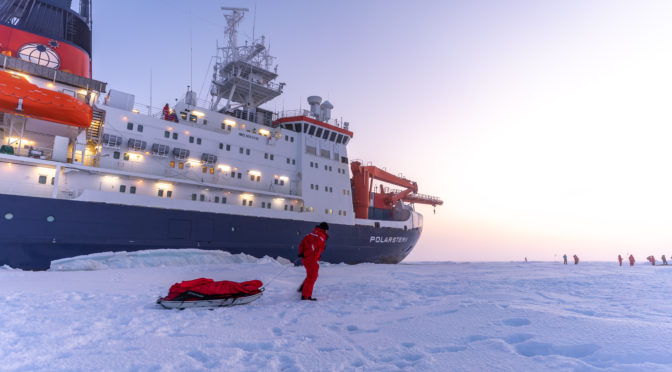 Coming on the heels of the new tri-service maritime strategy (“Advantage at Sea”), the Department of the Navy has now released an updated framework for the Arctic region— “A Blue Arctic: A Strategic Blueprint for the Arctic.” The document is a marked improvement on the brisk 2019 Navy version. It is particularly innovative (as strategies go) in including the Marine Corps in a “Blue/Green” approach to the region and in its navigation of cooperative themes in a moment dominated by great power competition. Yet it also has room for growth, in particular on how to connect loftier concepts with operational realities.

As the title implies, the strategy leans into framing the Arctic as “blue” (as opposed to “white”). The “Blue Arctic” conceit is likely to be among the document’s most enduring legacies. Coming on the tail end of a Trump presidency, the strategy may not be officially in force for long. As a result, its rhetorical contributions could outlast any specific policy proposals. On that score, the Blue Arctic push might be a success. Given the realities of climate change, the real novelty that the Navy, Marine Corps, and US policymakers must wrestle with in the Arctic’s future is how rapidly its maritime character is changing. It makes sense to grapple with that reality directly, and to give it a moniker that the bureaucracy can grab hold of.

That maritime focus does not displace the long-term role of aerospace defense in the Arctic, as attested by the enduring US-Canada partnership through the North American Aerospace Defense Command (NORAD). Yet going back to documents from the Obama administration, like the 2016 implementation framework for the 2013 national strategy, it was clear (via tasking to the Coast Guard and National Oceanic and Atmospheric Administration) that the maritime angle was rising in importance. Similarly, the Blue Arctic framing well highlights emerging challenges—climate change is the central factor reshaping Arctic geopolitics. Coming with an opening seascape is the greater likelihood for accidents at sea and the prospect of miscalculation that accompanies rival navies operating near one another. So, as a framework for thinking about what is strategically salient in the Arctic today, the Blue Arctic is a helpful construct.

Similarly innovative is the strategy’s authorship. Although the document is not fully tri-service like its recent partner, it is notable as the first modern joint Navy/Marine Corps Arctic strategy. This is not just a bureaucratic feat. The Marine Corps has long-standing operational requirements in the Arctic—as evinced by High North amphibious exercises off Alaska and Norway.

Integrating Navy and Marine Corps operations is part of a bigger trend, as seen in the commandant’s planning guidance and the release of new operational concepts like Expeditionary Advanced Basing Operations and Littoral Operations in Contested Environments (LOCE). Some of these, particularly LOCE, also feature in the Arctic strategy. Yet considering those operational concepts were developed for a potential crisis in the Pacific theater, their reapplication to the Arctic warrants some further scrutiny.

Where the document is at its best, however, is in the focus on the US’s objectives in the Arctic. The document should be lauded—in a moment dominated by great power competition—for foregrounding stability, governance, and peace as the main political objectives guiding US engagement in the Arctic. The invocation of peace through strength is vague and opens the potential for a more confrontational approach to the Arctic, but it does not require that interpretation.

This pivot to stability can also be seen, if subtly, in the document’s treatment of Russia and China. The Department of Defense’s 2019 Arctic strategy, by comparison, references Russia and China in near equal measure. The new Department of the Navy strategy leans slightly more to Russia, which makes sense for an Arctic document. Qualitatively, the document probably also does better differentiating between the two countries compared to the DOD document. That is most evident in its treatment of the theme of cooperation with Russia, where feasible. The strategy is shy about saying so out loud sometimes, but such is evidently the subtext behind the “new partners” section on page 16, for example.

The recent Air Force and the Space Force Arctic strategy offers another useful comparison. That document is forward leaning on the theme of cooperation—but mostly in the context of allies and partners (it names Greenland and Thule frequently to reinforce the Arctic equities of the two services). The Navy/Marine Corps strategy names names too, but with a savvy eye towards domestic readers. Alaska is an obvious hallmark of US Arctic strategies and the Alaska delegation is the key constituency on the Hill for Arctic products. But the Navy document also elevates Maine to new heights, likely given the state’s burgeoning economic emphasis on ties to Greenland and Senator King’s co-chairing of the Arctic caucus.

The move to focus on stability and engagement is not a full pivot from competition. In fact, as in the new tri-service maritime strategy, day-to-day competition is a notable undercurrent throughout the Arctic document. As I’ve written previously, the question of what it means to compete day-to-day for maritime services can be split along two axes: positional and political competition.

Positional competition means posturing forces to deter a conflict or, failing that, creating the conditions for success in the event of a fight. That boils down to a persistent need for basing, access, and allies.

Political competition is about continued US security and economic leadership of an international order that reflects its interests and values. That invites a competition over global agenda setting, defending maritime norms, and not strictly a perspective on winning the big fight.

The new Arctic framework hints strongly at political competition when it talks about the need to compete in “a way that protects vital national interests and preserves regional security without undermining trust and triggering conflict.” That is, I believe, the right approach, and those responsible for implementing the strategy should look to the new tri-service document for its extended treatment of the idea of day-to-day competition.

Presence typically rhymes with competition for the Navy, and it is no surprise that the strategy emphasizes that issue at length. As others have noted, the strategy takes a big picture view of the Arctic as one space for policy-making (a circumpolar perspective). That is understandable for a document that lives at the high altitude of strategy, but it challenges building connective tissue between the idea of presence and specific operational recommendations on where presence is most useful to pursue stability, peace, or rule of law. Strategy is ultimately about helping shape hard choices on the application of finite resources, and when it comes to where presence is most needed, an implementation framework is particularly critical to help translate the broad (and standardly Navy) idea into practice.

Then there is the question of presence with what? In the Arctic, that question has implications for whether the Navy buys different kinds of assets (ice hardened vessels?) or how it plans to compete day-to-day in an austere domain. Submarines commonly operate in the Arctic, but they are high demand, low density assets and are famously bad at overt signaling (by design). Aircraft carriers have gone north (see exercises Northern Edge or Trident Juncture) but are even scarcer and can be quite provocative. Destroyers are versatile platforms but constrained in operational range by the presence of ice in some regions at some times of year. Because service strategies can most directly influence service activities—staffing, training, and equipping the fleet—the issue of platforms is also one that an implementation plan should tackle directly.

There is a lot more to the new blueprint. It laudably addresses the need to plug data gaps for issues of weather modeling, for example, and it emphasizes the role of the professional military education complex in better preparing future military leaders for the Arctic’s political and strategic character. Yet its greatest innovations may be the ones that require the least digging. The subtle but evident broadening of cooperation, to occasionally include Russia, is a key feature of addressing stability in the Arctic and managing China’s rise. Most evidently, the framework clearly stakes a claim to the Arctic as fundamentally maritime and littoral. Following on that geography, it invites the Navy and Marine Corps to collaborate strategically where so far they have mostly done so operationally. That marriage necessitates more critical analysis about how Blue/Green operational ideas translate to the Arctic, but the underlying shift the framework represents is a notable achievement in its own right.

Dr. Joshua Tallis is a research scientist at the Center for Naval Analyses and an adjunct professor at the George Washington University specializing in maritime security, polar affairs, and naval strategy. He is the author of the 2019 book, The War for Muddy Waters: Pirates, Terrorists, Traffickers, and Maritime Insecurity. The opinions in this article do not necessarily reflect those of CNA or the U.S. Navy.

Featured Image: Scientist carrying equipment on ice in front of RV Polarstern during the MOSAiC expedition in September 2019. (Wikimedia Commons)