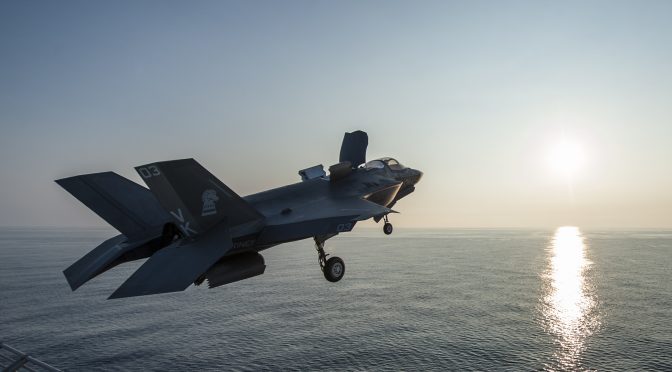 Imagine, for a moment, a hypothetical country rapidly spiraling towards autocracy, illegally arresting American citizens, imprisoning journalists, and attacking American-supported forces. Now imagine that same country actively purchasing Russian surface-to-air missile systems and erecting missile defense sites around its territory. In such a hypothetical, it would be difficult to assume that the United States would ever support or even arm such a country. Unfortunately, this is not a hypothetical scenario. Not only is the U.S. treaty-bound to an alliance with such a country, it is actively engaged in efforts to sell fifth generation attack aircraft to it. The country in question, Turkey, and its drive toward acquiring a fleet of F-35s represents a serious threat to American national security and technological superiority. Fortunately, this threat has not been ignored by American policymakers, though more can be done to secure American aerial supremacy.

Two main factors combine to make the sale of F-35s to Turkey a credible threat to American national security. First, on the immediate and kinetic front, Ankara’s continued efforts to acquire and deploy Russian-made integrated surface-to-air missile systems could give Russian engineers and radar systems operators key insight into the radar cross section and signals signature of the F-35. Second, on a broader and more strategically oriented scale, further supporting Turkey’s military advancement could backfire should the country slip further toward authoritarianism.

The first of these issues has thus far garnered the most attention on the Hill, due largely to its immediacy and clear outcome. Put simply, should the Turkish Air Force operate the F-35 in the vicinity of Russian S-400 missile systems Turkey will receive in 2019, Russian engineers could gain valuable insight into the aircraft’s detectability and flight profile. This would greatly hinder American aerial superiority and could jeopardize some of the most critical capabilities of the new aircraft should conflict with Russia arise. Lawmakers were quick to recognize the signals intelligence threat posed by Turkey linking the Russian missile system to the fleet of F-35s it is scheduled to receive in 2020. Last fall, Congress put a halt on the sale of F-35s to Turkey pending a report from the Pentagon on the implications of Ankara’s acquisition of the 100 F-35s it originally planned on purchasing. That report was delivered in November and Congress has yet to formally announce its conclusions on whether or not the sale will go ahead as planned.

Unfortunately, Congressional concern over Turkish F-35 acquisition might come too late to have a strong impact on Russian examination of the aircraft. Indeed, as President Erdogan continues to develop a stronger relationship with Moscow, pilots of the Turkish Air Force are training to fly American-made F-35s out of Arizona’s Luke Air Force Base. Moreover, the Turkish Air Force has already received its first F-35 and, though the plane remains in the United States, as Sebastien Roblin wrote in early September, it cannot be legally confiscated by the U.S. government. Should this specific aircraft successfully make its way to Turkey, it would likely be exposed to the prying sensors of the S-400.

The problems do not stop there. Beyond the immediate concern of compromising the classified capabilities of the F-35, fifth generation fighter sales to Turkey represent a strategic and ethical threat to both the United States and the NATO alliance as a whole. In the past few years, President Erdogan has successfully solidified himself as a modern autocrat in all but name. After 2016’s failed coup attempt, Erdogan has directed the arrests of tens of thousands of political opponents, journalists, teachers, and activists. He has illegally detained American citizens and threatened American-supported forces on the ground in Syria. These hardly represent the actions of a dedicated ally and should cause grave concern for export control professionals engaged in the sale of any advanced weapons systems, let alone the F-35, to Ankara.

Moreover, Erdogan has repeatedly threatened to leave the NATO alliance as a response to the growing tensions between Turkey and the United States. This comes at a time when the alliance faces increased Russian aggression on its borders and Russian interference in the political spheres of member nations. Indeed, Erdogan’s actions hardly support an image of a united alliance against Russian aggression. Rewarding such threats and rhetoric with the delivery of F-35s, regardless of Turkey’s investment in the program, is hardly a sound strategy. Indeed, as the leader of the world’s largest alliance of liberal democracies, it would behoove Washington to distance itself from Ankara’s rapid descent towards despotism. This argument is only compounded further when recognizing that not only American F-35s would be put at risk by Turkish acquisition, but the F-35 fleets of NATO allies like the UK and Norway as well.

While diagnosing the risks associated with selling F-35s to Turkey is an easy task, treating them is far more difficult. Largely, this is a result of Turkey’s deep industrial involvement in the development of the aircraft. To date, ten separate Turkish firms have engaged in significant support efforts in the F-35 program ranging from the integration of the plane’s new precision-guided Stand-off Missile to direct production of the F-35s weapons bay doors. Beyond the private sector, President Erdogan has repeatedly brought up the fact that the Turkish government has spent, in total, almost a billion dollars on the procurement of F-35 airframes. Such an immense level of sunk cost and existing investment means that Ankara will not simply roll over should Congress decide to cancel the sale of further F-35s. The White House must then determine whether fraying military ties with Turkey is worth preserving its new fifth generation fighter.

In light of Turkey’s increased relationship with Russia, commitment to purchasing Russian weapon systems, and rapid devolution into a modern autocracy, Washington’s best interest lies in denying the sale of further F-35 airframes to Turkey. The F-35 is critical to the future of American and NATO air superiority. It cannot be used as just another political chip on the global chessboard. Should it be sold to Turkey without Ankara’s cancellation of the S-400 deal, the F-35 could be compromised before it even takes flight as America’s primary strike fighter.

Duncan Kellogg is a developing naval analyst studying nuclear defense posture and maritime security at George Washington University’s Elliott School of International Affairs. Duncan has been writing about the intersection of deterrence theory and maritime security since 2015. He lives in Washington, D.C. with his fish Maverick.