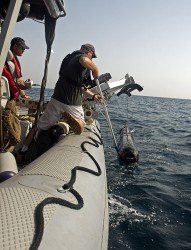 A frequently cited fact in my days training to be a naval officer was that the most common weapon for damaging a warship since World War II was the naval mine.  The recently concluded International Mine Countermeasures Exercise 2012 (IMCMEX 12), held in 3 distinct OPAREAs throughout the U.S. Fifth Fleet Area of Responsibility (AOR), demonstrated both the difficulty of mine countermeasures (MCM) operations (detecting and clearing mines) and the potential of new technology to mitigate those dangers.

PBS’ News Hour quotes a retired naval officer and observer of the exercise, Capt. Robert O’Donnell, stating of the 29 simulated mines in the exercise, “I don’t think a great many were found…It was probably around half or less.”

The response from the Navy is a little confusing:

The Navy declined to provide data on how many practice mines were located during the two-week naval drill but did not dispute that less than half were found. However, a spokesman insisted that the figures do not tell the whole story and that the event was “‘not just about finding” the dummy mines.

“We enjoyed great success,” said Cdr. Jason Salata, the top public affairs officer for the 5th Fleet. “Every platform that was sent to find a shape found a shape. We stand by that.” Salata asserted that “there were no missed mines, each platform that had an opportunity to find the mine did so.”

While it is true that a 100% detection rate is not what the exercise was all about, that rate is still an interesting figure.  It could indicate that every mine was found, but perhaps not by every platform – instead as a result of the cumulative MCM effort.  It’s likewise unknown how the success rate broke down by platform and nation – more than 27 international partners operated with U.S. Fifth Fleet as part of the exercise.  What is known is that MCM remains a difficult and deadly business, particularly in the context of some of the most likely future conflict scenarios, including Iran and North Korea.

While the exercise results will disappoint some (again, we don’t know who or what had difficulty finding what types of mines), they will also serve to reinforce the arguments for recapitalizing the Avenger-class MCMs, outfitting the USS Ponce as an Afloat Forward Staging Base, and placing rigorous demands on getting the LCS MCM mission package right.  As mentioned above, the exercise was additionally an opportunity to test out some new kit.  Before the exercise got underway, NavalDrones provided a preview of some of the Remotely Operated Vehicles (ROVs) and Autonomous Underwater Vehicles (AUVs) slated for testing in the drill, as well as a recap of other drones designed for MCM duties.  Furthermore, a pair of similar threats might spark the development of crossover technology for use in MCM.

In addition to the more traditional types of naval mines, detecting and defeating the waterborne IEDs and enemy drones (AUVs and ROVs) of both state and non-state actors is seen by some as increasing in importance, and may rely on many of the same technologies used in MCM.  Like the land-based IED/counter-IED arms-race of the past decade, we could be witnessing the start of a similar set of opposing innovation escalations.  Foreign Policy earlier this week reported that the creation of the Iraq/Afghanistan wars, the Joint IED Defeat Organization (JIEDDO), is executing its own Pivot to the Pacific to focus on the typically lower-tech threats of waterborne terrorists and IEDs.  Meanwhile NavalDrones last week highlighted some of the detection and clearance technologies that could be used against the evolving undersea drone fleets.  The next decade is shaping up to be an interesting time for technology under the waves.