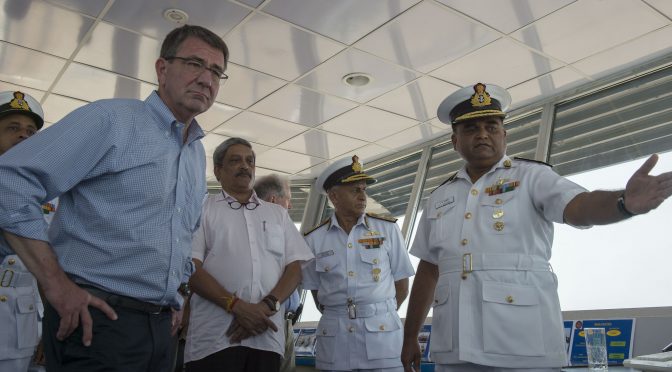 The following article was originally featured by the Pacific Forum-CSIS’s PacNet series and is republished with permission. Read it in its original form here.

Recently, editorial columns in Indian newspapers have become a battleground for strategic commentators to debate the merits of India’s defense logistics pact with the United States. Despite a public declaration by the Indian government regarding the “non-military” nature of the Logistics Exchange Memoranda of Agreement (LEMOA), the pact hasn’t resonated favorably with a section of India’s strategic elite, who reject the idea of providing the US military with operational access to Indian facilities. New Delhi might have much to gain from the LEMOA, which could be critical in establishing a favorable balance of power in Asia.

The critics argue that the arrangement does not benefit India in the same way that it advantages the US military. As a leading Indian defense analyst put it, “the government seems to have been guided more by the fear of being accused of succumbing to pressure from Washington and less by an evaluation of whether this might benefit India’s military.” As a result, Indian defense ministry officials find themselves under pressure to explain why they believe an agreement with the US on military logistics is in India’s best interests.

New Delhi’s stock response has been that the pact is strictly “conditional,” and allows access to supplies and services to the military forces of both countries only when engaged in a specific set of predetermined activities. At a press conference in Washington after the signing of the agreement, Defense Minister Manohar Parrikar was at pains to explain that the agreement has nothing to do with the setting up of a military base. “It’s only about logistics support to each other’s fleet” he averred, “like supply of fuel, supply of many other things which are required for joint operations, humanitarian assistance and many other relief operations.”

And yet there is little denying that in today’s maritime environment, every ‘place’ that provides logistics support essentially performs the role of a peacetime military base, albeit in limited ways. This is because operational logistics is the life-blood of contemporary maritime missions. Any ocean-going navy that can secure logistical pit-stops can guarantee itself a wider operational footprint in distant littorals. In fact, leading maritime powers, including the United States, Russia and China, are reluctant to set up permanent bases in distant lands because what they aim to achieve in terms of strategic presence is made possible through low-level repair and replenishment ‘places.’  To be sure, with over 800 foreign military installations, the US still has a globe-girdling presence, but few of its existing overseas facilities are permanent military bases.

To better appreciate why foreign military bases do not enjoy the same appeal as in earlier times, one must study the history of their evolution. The permanent naval base was a product of 19th-century politics when Britain, the leading maritime power, set up a network of military bases around the world to sustain its global supremacy. In the latter half of the 20th century, Britain was replaced by the United States, which soon came to dominate the world’s economic and strategic landscape. The US system of military bases consisted of several thousand installations at hundreds of basing sites in over 100 countries. The logic of the military basing system was intimately related to the dynamics of conflict. A military base was seen as a forward deployment position to enforce a denial regime on the enemy. It was a useful way of keeping the pressure on adversaries, and it allowed the US military to dominate the international system and prevent the rise of another hegemon.

But the logic of overseas bases has eroded. The absence of a real war in the intervening years has seen the law of diminishing returns kick in vis-à-vis foreign military bases, and an attenuation of their animating rationale. After struggling with rising domestic opposition to its military presence in Asia, the United States has been looking for more pragmatic options.

Since prolonged military presence on a foreign land isn’t a practical solution to any of its strategic problems, the US has been prioritizing logistics pacts that involve continuing support of rotational troops but no permanent deployments. These are variants of the “Acquisition and Cross-Service Agreements” (ACSAs) – or logistical arrangements for military support, supplies, and services (food, fuel, transportation, ammunition, and equipment) – that the United States shares with many of its NATO partners. And yet, despite being avowedly in support of peacetime operations and regional humanitarian contingencies, these pacts have not changed the public perception that US military presence overseas advance America’s imperialist ambitions.

A case in point is the recent Extended Defense Cooperation Agreement (EDCA) with Manila, which provides the US military access to five military bases in Philippines. Even though the agreement was signed in 2014, strong domestic opposition within Philippines from civil rights groups resulted in a legal stalemate at the country’s Supreme Court. In January this year, when the court finally ruled in the pact’s favor, its decision seemed motivated mainly by the China-factor – the increased threat posed by China in the Philippines’ near-seas.

While the defense pact has a limited objective – enabling US troops to rotate through the Philippines, ensuring a persistent but intermittent presence – the new military facilities in Philippines aren’t expected to be any less potent than the United States’ erstwhile permanent bases in the country. The infrastructure will facilitate a spectrum of peacetime missions in the South China Sea, including training and capacity building, area patrols, aerial surveys, and fleet exercises. It will also enable the Philippines to call upon the US for critical military assistance in the event of a crisis.

The United States isn’t the only country to depend on military logistics pacts to achieve broader strategic objectives. Increasingly, China is resorting to the same means. The PLA’s logistical base at Djibouti doesn’t just provide support for China’s anti-piracy missions, but also enables a round-the-year naval presence in the Indian Ocean. What is more, China’s recent commercial facilities in the Indian Ocean Region seem more in the nature of dual-use bases, which can quickly be upgraded to medium-grade military facilities in a crisis.

New Delhi must come to terms with the fact that LEMOA’s utility lies in facilitating greater US-India operational coordination in Asia. Notwithstanding Parrikar’s assurances to the contrary, closer maritime interaction between India and the US will increasingly involve operational access to each other’s bases for strategic purposes. Even if the necessary cooperation is cleared on a case-by-case basis and driven mainly by regional capacity building and HADR needs, the Indian Navy and the US Navy might find themselves acting increasingly in concert to achieve common strategic objectives in the regional commons.

This does not mean LEMOA promotes US geopolitical interests at India’s expense. If anything, the pact empowers the Indian Navy to expand its own operations in the Indo-Pacific region. It is an aspiration that the Navy professed to recently when it released a map for public viewing that showed Indian naval deployments over the past 12 months, spread across the Indian Ocean and the Pacific region.

Given the fraught nature of security in the Asian commons, India has been looking for ways to emphasize a rules-based order in the region. To consolidate its status as a crucial security provider, the Indian Navy will need to act in close coordination with the US Navy, the leading maritime power in Indo-Pacific, to ensure a fair, open, and balanced regional security architecture.

Abhijit Singh (abhijit.singh27@gmail.com), a former Indian naval officer, is Senior Fellow and Head, Maritime Policy Initiative at the Observer Research Foundation (ORF) in New Delhi. You can follow him on Twitter at @abhijit227.

Featured Image: Secretary of Defense Ash Carter speaks with Indian Naval Officers as he tours Indian Naval Station Karwar as part of a visit to the Indian aircraft carrier INS Vikramaditya, April 11, 2016. Carter is visiting India to solidify the rebalance to the Asia-Pacific region.(Photo by Senior Master Sgt. Adrian Cadiz)(Released)