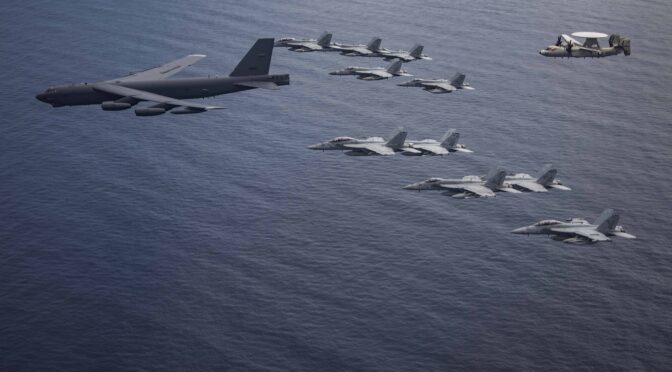 By Collin Fox and Harrison Schramm

This is the first in a series of articles that ask necessary but unpopular questions of the West’s defense-industrial complex. The best questions for this series are also the worst: they should be unpopular to ask and produce disquieting answers — when an answer is even possible. Got a provocative question? Send it to Content@cimsec.org.

Choose your own adventure: How is America’s next great power war most likely to end? (Pick one.)

A: The conflict is over rapidly, the U.S. is victorious, life goes on, and there’s nothing to analyze,

B: The conflict is over rapidly, the U.S. is defeated, and there’s nothing to analyze, or

C: The conflict is over quickly, everyone is dead, and there is nothing to analyze.

If you chose ‘none of the above,’ you probably don’t have a future as a late 80’s action screenwriter,1 but you might have one as a strategist.

Let’s pull the thread on the implicitly rejected option D: The conflict drags on. The defense establishment’s preoccupation with nuclear conflict throughout the Cold War has left a poisonous fallout of assumptions with an unexpectedly long half-life, chiefly the implicit expectation for a short, sharp conflict between great powers. While this expectation has many repercussions, from combat logistics to global economics to conflict termination, the attrition of combat aircraft is the topic today.

Each Services’ jet fighter community chase highly favorable attrition ratios; these cannot be assumed for a future conflict. Although current U.S. aircraft are exquisite feats of engineering that border on the miraculous, the trend creates an (un)virtuous cycle: Fewer aircraft need to be more exquisitely engineered, and more exquisite aircraft are fewer in number. This cycle is perhaps best described by Norman Augustine: “In the year 2054, the entire defense budget will purchase just one tactical aircraft. This aircraft will have to be shared by the Air Force and Navy 3½ days each per week except for leap year, when it will be made available to the Marines for the extra day.”

In contrast, a conventional conflict against a peer adversary could very easily result in the rapid attrition of top-line munitions and aircraft, both in the air and on the ground. From there, the war would become an entrenched stalemate – an admittedly unpopular yet plausible proposition. What actions should the United States and its allies take now as a hedging strategy?

The idea of a stalemated war in the skies over the sea against China or Russia echoes the First World War’s Western Front. Here, a stalemate is not defined by earthworks and wire across physical territory, but rather the inability to field a second wave of air power after the first is lost. American airpower would get very thin very fast after removing F-22s and F-35s from the flightline, and even more so when the runway itself becomes cratered rubble scattered with burning aircraft.

In the other corner, China’s significant production capabilities are neither unlimited nor invincible. The need for experienced replacement pilots to operate replacement aircraft may also be a critical factor in a future great power war, just as it was for Imperial Japan. In such a future, the ability to rapidly reconstitute a force of “acceptable” — vice “exquisite” — aircraft will be a vitally important factor for the United States to support war termination on favorable terms.

A threefold sequential hedging strategy can preserve and expand aerial combat power against rapid attrition. The first tenant is that an aircraft saved is an aircraft produced. Existing exquisite platforms need to be carefully employed and well-protected by legions of Unmanned Combat Aerial Vehicles (UCAVs). Secondly, the United States should seriously consider – and exercise – a true capacity to quickly return retired (“mothballed”) aircraft to active status. Third, and perhaps most importantly, the United States should invest in the design and prototype production of new, replacement combat aircraft, both manned and unmanned, that are designed to be built quickly and in large numbers.

General war is (generally) unpredictable. Clausewitz underscores the play of random chance and probability in war; Sun Tzu advises commanders to win without fighting. After all, when politics can deliver desired aims with certainty, why escalate to the chaotic friction of combat? The present authors have formal education in applied probability and endorse the wisdom of getting a sure thing over a wager with blurry odds. A great power war in the coming decades would likely result from strategic miscalculation by one or more belligerents – namely, the eventual loser(s) – which would create a heady and uncertain operational fog in the opening engagements. Many commanders would be tempted to extract a rapid, decisive victory from this melee. In an era of long-range, precision guided munitions fired across expansive distances, combat aircraft will be the closest thing to shock troops charging to the front line, the bloody fray of attrition warfare.

For the United States and its Allies, the risk to force for exquisite and hard-t0-replace platforms needs to be understood, acknowledged, and mitigated before they are exposed to risk in high-stakes battles. One way to mitigate the risk to force is to rely on unmanned systems; however, as these systems have similar – or in some cases, greater – complexity to manned systems, we expect that they will be subject to the same production shortages as manned systems.

Along this line of effort, an attractive and ongoing approach is to develop risk-worthy UCAVs, which would blunt enemy attacks while also distributing friendly sensors and weapons. These platforms are a low-hanging fruit, relatively inexpensive, and ready for accelerated operational development after decades of development. In addition to these operational considerations, producing these platforms in significant quantities in the near future would also help maintain the industrial base for accelerating production should the need arise.

Assume for a moment that the 80’s screenwriters are wrong, and a great power war drags on through months and years. What mitigations should the U.S. put in place now? An extended great power conflict would require a fallback capability of ‘second tier’ aircraft. Much of this fallback capacity already exists in the form of reserve and Air National Guard squadrons, many of which would likely see combat. Nevertheless, the logic of attrition also applies to these reserve aviation forces. Aviation-specific manpower policies, motivated in part by Imperial Japan’s pilot shortfall in WWII, grant a relative abundance of trained and experienced American combat aviators. Even so, they still need aircraft to fly.

Fortunately, the United States also has a large collection of retired but ‘preserved’ aircraft, most of which are at the ‘boneyard’, at Davis-Monthan Air Force Base in Arizona. While the modernization of current air wings are underway, budgeteers would do well to broadly consider service life extension programs (SLEP) for the ‘best’ past generation aircraft as a potential backfill for the attrition of manned aircraft and invest in greater capacity to accelerate the same.

While increasing funding for maintaining, preserving, and regenerating aircraft in the ‘boneyard’ is one course of action, it is admittedly not well-aligned with the broad incentives of either government or industry (with the possible exception of Arizona’s 2nd congressional district2).

A complementary approach is to prepare plans ‘at the ready’ for aircraft that can be rapidly built and fielded. For these aircraft specifically, the more parts they have in common with contemporary military (and civilian) aircraft, the better.

“Good Enough” means both things: good must be good and enough must be enough.

The first two hedges are admittedly expedient stopgaps, not optimal solutions. The most likely operational environment (the Indo-Pacific) and the most likely/dangerous belligerent (China) frames the required operational capabilities for replacement aircraft: They must have long range to be relevant across the vast distances of the Pacific and should be low-observable to evade detection and survive against capable air defenses.

Clear and well-justified system requirements should be based on a stable, reasonable, and coherent vision of the planned operational environment. The fiscal operational environment for this concept also means that it should be designed for rapid production and moderate cost, and by extension, low technological risk. Speed of production is a key performance parameter. Other performance parameters, like airspeed, should be strictly scoped against requirements creep.

Let good be good and enough be enough.

The Department of Defense should start with these modest and well-justified requirements to then develop progressive iterations of merely sufficient designs. Early and detailed systems engineering can help reduce risk, as can the conscious integration of mature technologies over the exotic temptation of leap-ahead capabilities. Government-ownership of these designs would allow widespread and more competitive aircraft production if the need ever arose, in keeping with the successful development and acquisition model of the Tomahawk cruise missile. A wide base of the American manufacturing and political establishment could be incentivized to invest in aerospace manufacturing capacity through the grant mechanism previously described in Distributed Manufacturing for Distributed Lethality.

The uncomfortable part of this question is not overcoming an engineering challenge or reinforcing the industrial base. It’s the recognition of just how destructive a future great power war would be, and that our best, most expensive ‘kit’ will likely be the first to be lost. It’s the acknowledgement of just how important a fieldable ‘second line’ of aircraft could be as a hedging strategy should most of each side’s exquisite first rate forces end up on each other’s spears.

Lieutenant Commander Collin Fox, U.S. Navy, is a foreign area officer serving as a military advisor with the Department of State. He is a graduate of the Naval Postgraduate School and the Chilean Naval War College.

Harrison Schramm is a retired Naval Aviator. He is President of the Analytics Society of INFORMS and a Principal Research Scientist at Group W.

The views presented are those of the authors and do not necessarily represent the views of any institution with which they are affiliated.

2. Where “the boneyard” is located.