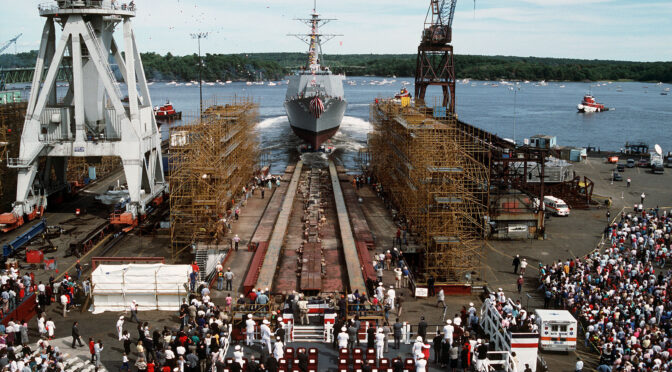 Increasingly powerful strategic competitors and a flat defense budget call to mind this pithy quote, often misattributed to Winston Churchill: “Gentlemen, we have run out of money; now we have to think.” The United States Navy’s historical annual shipbuilding budget can either maintain the fleet size at status quo or build a hollow force with more ships. Wargames suggest that either such fleet, as part of the joint force, would not prevail in a conflict with China. This troubling consensus has spurred the Navy to develop Distributed Maritime Operations (DMO) and to overhaul the fleet in order to implement the new operational concept.

Budget justifications portray Medium Unmanned Surface Vehicles (MUSV) as both “attritable assets if used in a peer or near-peer conflict” and “key enablers of the Navy’s Distributed Maritime Operations concept.” American industry must build these and other key enablers even faster than the enemy can attrite them, but where? To overcome the limited capacity of American shipyards in pursuit of this requirement, Congress should develop a distributed shipbuilding industrial base through a variety of structured incentives.

Skeptics of the Navy’s shipbuilding plans may wonder how a small, attritable, unmanned, and presently unarmed vessel has become a “key enabler” in the Navy’s foremost warfighting concept. MUSVs will initially support “Battlespace Awareness through Intelligence, Surveillance and Reconnaissance (ISR) and Electronic Warfare (EW).” Scouts have always been the eyes of the fleet, enabling the commander to see the battlespace better than the enemy, win the critical ISR fight, and then fire effectively first. In the age of hypersonic anti-ship weapons, taking that first accurate shot is more important than ever. DMO relies on having many sensor nodes that are widely distributed in order to see first and shoot first, but the enemy will attrite many of these scout-sensors as they navigate the maritime battlespace. The fleet will need an abundance of these scouts to begin with, and will need to acquire more at the rapid pace of attrition through a prolonged conflict.

This raises the industrial base problem, or as it were, the opportunity: How many vessels can be built, how quickly, and where?

Eleven American shipyards cranked out 175 Fletcher-class destroyers during the Second World War – over 400,000 tons of just one class of combatants – even as the arsenal of democracy produced incredible quantities of auxiliaries, vehicles, aircraft, weapons, munitions, and many other warships. Most of those shipyards have long since closed; those that remain have little spare capacity. After COVID-19’s fiscal devastation plays out, the paltry seven ships authorized in FY21 may represent the underwhelming high water mark of the “terrible twenties.”

China has the maritime industrial base to surge into dominant overproduction. The United States clearly does not, and even struggles to coordinate routine peacetime maintenance between sea services. This industrial asymmetry could spell disaster: The U.S. Navy could not repair battle damage, conduct maintenance, replace lost ships, and grow the fleet during a prolonged war with China. The industrial base just isn’t there, and shipyards take far longer to build than ships.

The existing shipbuilding base must be strengthened to maintain the legacy force structure and continue to produce substantial warships, from aircraft carriers down to the corvette-sized large unmanned surface vessel (LUSV). The shipbuilding expansion for smaller vessels such as the medium unmanned surface vessel (MUSV) must not compete for the already limited industrial capacity. The Congressional Research Service concurs, noting that such unmanned vessels “can be built and maintained by facilities other than the shipyards that currently build the Navy’s major combatant ships.” But if not existing shipyards, then where? This seeming challenge offers a unique opportunity to both grow the shipbuilding defense industrial base and broaden the sea power political base through distributed manufacturing.

The factors that have traditionally concentrated production within a shipyard have shifted over the past few decades: Computer aided design (CAD) allows engineering teams to span continents and work around the clock on the same project. Computer Numerical Controlled (CNC) machines create parts that fit together as precisely as they appeared on the monitor, even if the parts came from facilities thousands of miles apart. Supply chain engineering then brings these disparate parts into a faster and potentially more robust assembly process.

However, the feasibility and economy of transporting large and heavy objects has changed little. Size matters: just because a given component or subassembly can be produced down the road or across the country does not mean that it should be. Until recently, the vessels that mattered in naval warfare – or even their major subassemblies – were just too big and heavy for overland transport. Vessels that could be transported overland lacked the range and payload to count for much in combat. The convergent effects of miniaturization, automation, and fuel efficiency have changed that calculus, as exemplified by the Sea Hunter’s increasingly capable autonomy and 10,000 nautical mile range. The Sea Hunter and future MUSV classes will indeed contribute to the fleet in meaningful ways, yet at 45 to 190 feet long, they can also be transported (in whole or in part) from places that only Noah would recognize as a shipyard.

The Navy should develop and incentivize a more robust and distributed shipbuilding industrial base by expanding far beyond traditional shipyards and deliberately incorporating non-traditional suppliers. Not only would such an expansion increase competition and manufacturing capacity, but it would also allow ship production to quickly accelerate in crisis or war. Thanks to digital manufacturing, such a shift in production could happen overnight, unlike the laborious retooling and retraining process that civilian factories undertook to produce war materiel in the previous century.

Many different American manufacturing facilities with advanced industrial tools, such as large CNC routers, CNC welding machines, and 3D printers, could produce the bulk of each attritable vessel. Such facilities could even produce complete knockdown kits for metal-hulled MUSVs, or partial kits for the innards of composite-hulled vessels. The hulls of the latter, like Sea Hunter and Sea Hunter II, could be produced by any maritime, automotive, or aerospace company with the space to store a large mold and the competence to pop out the composite hull forms on demand. Facilities with appropriate workforce and machinery would assemble these widely sourced components into major subassemblies for larger MUSVs, ready for final assembly in the shipyard. These facilities would likewise assemble vessels on the smaller end of the MUSV range, up to about 70 feet and 40 tons, for direct transport to a launch site and subsequent deployment.

A Vincent-Trammel Act for the 21st Century

Industry has long lamented how hard it is to work with the Department of Defense. Many small companies vote with their feet after a few failed attempts, forgoing the DoD’s labyrinthine processes, extensive contracting requirements, and uncertain – if sometimes substantial – cash flows. A dwindling number of prime contractors act as a lucrative boundary layer between the byzantine defense acquisition requirements and the subcontractors, who find their niche exotic technology far easier to understand than defense contracting. Building a broader shipbuilding industrial base will require creative incentives and even fiduciary seduction to break through this status quo.

Inspired by the Department of Transportation’s very modest Small Shipyard Grants program, the proposed Distributed Manufacturing for Seapower Grants program would offer partial grants, competitively bid, to small companies for the purchase of advanced manufacturing machinery. However, this industrial equipment subsidy would also come with a contractual catch to integrate the manufacturer into the defense supply chain, or even – if required – compel production on the subsidized equipment. Some portion of the equipment subsidy would be recouped through an initially reduced contractual profit margin, reflecting the government’s capital financing investment, after which a higher profit margin would apply.

As with any contract, the incentives would be critical for success. This scheme would incentivize small manufacturers to join the defense industrial base with an initial contract and the means to perform it, while also establishing the relationship and familiarity to the larger process that can produce many items beyond the parts and pieces of modest vessels such as the MUSV.

The challenges of defense logistics are less about producing a part and more about the rest of the supply chain. Punching out a widget is just the beginning.

The Navy can help start improving the industrial base now by drafting modest vessel designs that incorporate manufacturing speed and ease of production as key performance parameters, and then contract a few of each model as a means to mature the design. The program office would also establish supply chain management targets and constraints for production optimization, such as required vessel deployment location, shipping costs, required installation date, manufacturing base health, item cost, and net time to build.

After receiving congressional budget appropriation for producing a given vessel, the program office would send requisitions for specified parts, subassembly production, and final vessel assembly to an automated clearinghouse, where these jobs would be offered to the capable manufacturers. Those manufacturers would bid on each job. If no one bids for a given job, the program office could compel manufacturing but pay a higher profit margin for the option. The winning bid may not be the lowest nominal bid because it should be the lowest total cost to government, to include considerations of production speed and shipping costs. All of these considerations would be continually integrated into the optimization model through machine learning.

Inspired by the Military Sealift Command’s turbo activation drills, the program office would hold component production drills and then stockpile the resultant knock-down kits near shipyards within vessel self-deployment range of likely trouble spots. The systems and internal components of a composite-hulled vessel – the engines, steering gear, sensors, electronics, etc. – would be assembled into compact kits, ready for the hulls to come out of molds and join them at the assembly site. Turbo activation for final vessel assembly from these pre-assembled kits would demonstrate the ability to churn out vessels at an incredible pace, and also help further refine the production process. In wartime, this process would be exercised in earnest to meet the furious pace of naval attrition.

With a demonstrated competence in rapidly producing, assembling, and deploying these vessels, the Navy could forego the anticipatory construction of a large fleet of wasting assets, which eat up operations and maintenance funds as they slowly degrade pierside.

Shipbuilding has an understandable association with maritime states, which can limit its political appeal for certain landlocked constituencies. Although the proposed expansion in the defense shipbuilding industrial base has a strategic logic founded in resiliency, competition, and flexibility, the investments and skilled jobs accompanying this expansion far beyond the usual maritime districts would also broaden the congressional shipbuilding caucus. Witness how the F-35 program spread economic benefits throughout 45 of the 50 states, gathering predictably broad congressional support. The LCS program did one better, in defiance of all programmatic logic, by never even down-selecting to a single seaframe. The LCS program’s budgetary-political logic, on the other hand, was airtight: All else being equal, an industrial base that is widely distributed will receive better budgetary consideration, particularly if it has concentrations in certain key districts.

With a growing bipartisan consensus that the nation needs a larger Navy to meet growing global security challenges, the time to act is now.

Lieutenant Commander Collin Fox, U.S. Navy, is a foreign area officer who recently served as the Navy and Air Force Section Chief at the Office of Defense Cooperation, U.S. Embassy, Panama. He earned a master of systems analysis degree from the Naval Postgraduate School and a master of naval and maritime science degree from the Chilean Naval War College. He has also published with the U.S. Naval Institute and War on the Rocks.