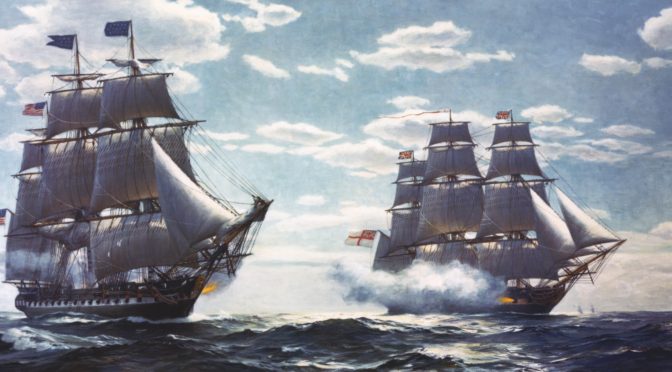 Many popular American histories of the War of 1812 portray the conflict as a series of stunning successes for the young nation and the United States Navy in particular. This is a war that included storied events like the U.S. frigate Constitution earning the nickname ‘Old Ironsides,’ the U.S. frigate Essex’s cruise of the Pacific, and numerous victorious frigate duels against the preeminent naval power of the era.

Some histories gloss over the U.S. Navy’s failures enough that it even appears the young nation won a war against the most powerful navy in the world. Rear Admiral Alfred Thayer Mahan, however, summed up the war quite differently stating that “although relieved by many brilliant incidents, indicative of the real spirit and capacity of the nation, the record upon the whole is one of gloom, disaster, and government incompetence, resulting from lack of national preparation, due to the obstinate and blind prepossessions of the Government, and, in part, of the people.”1 The U.S. Navy’s actions before and during the War of 1812 deserve critical examination to better evaluate the service’s success and understand how the war was fought. A consideration of the U.S. Navy’s preparation and conduct of the War of 1812 as a whole and at Lake Champlain in particular provides enduring lessons regarding maritime superiority and adversary-oriented planning.

Part One will discuss the U.S. Navy’s performance in general and Part Two will focus on Master Commandant Thomas Macdonough’s actions on Lake Champlain.

The Path to War

After resolving the Quasi War with France in 1800 and establishing peace in the Mediterranean with the Barbary States in 1805, the U.S. Navy’s clear antagonist was the British Royal Navy. Britain and France were in a relatively uninterrupted state of war with each other since the start of the French Revolution. The conflict intensified when Napoleon took control of France in 1803. To maintain their dominance on the seas, the Royal Navy relied on impressing sailors to man their ships. As a seafaring nation of immigrants mostly from the British Isles, American sailors were prime candidates for impressment into British service. American sovereignty and citizenship meant little to a monarchy that regarded its citizens as subjects indefinitely.

The British Government issued the first of their Orders in Council on January 6, 1807 to bolster their blockade of France. These Orders justified seizing and inspecting neutral ships to prevent any aid to Napoleon. American merchantmen were regularly stopped by the British to inspect cargo and impress sailors. On June 22, 1807, the most egregious infraction occurred when the frigate HMS Leopard stopped the American frigate Chesapeake off Norfolk. When the American Captain James Barron refused to allow the British aboard to inspect for suspected deserters, HMS Leopard opened fire.  Chesapeake was unprepared to engage and had to surrender after firing a single shot. The affair ended with three dead and eighteen injured aboard Chesapeake before giving up four suspected deserters to the British. President Thomas Jefferson believed that had Congress been in session or had he requested it, war would have been declared right then.2

The incident enraged the American public, but no change occurred with naval funding, manning, or deployment.  President Jefferson levied a heavy embargo against the British, and for their part the British Admiralty recalled HMS Leopard’s commander and admitted the error. The situation deescalated and soon the American public was enthralled by the revelation of Vice President Aaron Burr’s conspiracy and trial for treason. However, despite repeated American requests the British did not rescind the Orders in Council. Instead, they issued more and the impressments continued.

President James Madison spoke before Congress on June 1, 1812 regarding relations with Great Britain. He cited the impressment of American sailors, disregard for American sovereignty, and the plundering of American commerce as evidence of a state of war existing between the two nations.3 Since 1800, Great Britain captured 917 American ships and impressed 6,257 American seamen.4 With support from the War Hawks who sought to acquire Canada, Congress declared war on June 18, 1812. Ironically, the British rescinded the maligned Orders in Council two days earlier.

In 1812 the British Navy included 130 ships of the line with 60-120 guns and 600 frigates and smaller vessels. And the U.S. Navy at that time? Seven frigates fit for sea, three needing repairs, eight brigs, schooners, or sloops, and 165 gunboats (of which 103 were in ordinary or under repair). Never large to begin with, the U.S. Navy almost evaporated after hostilities ended with Tripoli in 1805. Cuts continued even after the Chesapeake–Leopard incident in 1807, and accelerated in the spring of 1810.5 Naval historian Charles O. Paullin described succinctly that when Congress declared war, “the Navy Department was unprepared in every essential means, instrument, and material of naval warfare. It had no dry docks. It had few ships. With the exception of the naval establishment at Washington, the navy-yards were in a state of neglect and decay.”6 Thankfully for the U.S. Navy, Napoleon thoroughly occupied the British Navy and the American declaration of war was entirely unexpected by the British government. Of their hundreds of warships, the British had only one ship of the line, seven frigates, and a dozen smaller vessels operating out of Halifax in the summer of 1812.7

In the year before declaring war, Congress and the Navy Department did little to prepare for the conflict. In a country where many questioned the need for or even dreaded the existence of a standing military, the small staff of the Navy Department focused more on relevancy and survival than war preparations. Only months before the war, Congress slowly began a meager build-up but spent nothing on ship construction. Perhaps out of hubris, only weeks after declaring war Congress approved $829,000 for purchasing, repairing, and equipping captured enemy vessels. So much opposition to or disinterest in the war existed that Congress couldn’t pass a bill to build more ships until January 1813. They approved $2,500,000 for four ships of the line and six frigates—25 percent more than the Navy Department’s entire 1811 budget. These warships would never see combat against the British.8

The Maritime Frontier and the War at Sea

The U.S. Navy began the war with three objectives: defend the maritime frontier, capture enemy warships and merchantmen, and maintain naval superiority on the lakes. Defending the maritime frontier consisted of guarding the American ports with gunboats, barges, or other small craft. This consumed almost half the U.S. Navy’s personnel without even adequately manning every vessel. Early in the war, Congress spent almost $2 million to reinforce the maritime frontier, but unless supported by land-based defenses, they were entirely ineffectual.9 They occasionally discouraged small enemy vessels from entering harbors or landing, but could not stop attacks from entire British squadrons.10 In August 1814, Rear Admiral Cockburn’s squadron overwhelmed the flotilla defending Washington and landed Major General Ross’s army, which burned down the capital city. The money spent on gunboats could have built eight frigates, but most unfortunately, they were made from materials originally allocated for six ships of the line.11

The war at sea to capture enemy warships and merchantmen was the most desirable objective for naval officers and the most popular in historical accounts. The numerous ship duel victories in this theater are some of the most famous victories of the early U.S. Navy. They include Captain Isaac Hull and the frigate Constitution’s capture of the frigate HMS Guerriere, Captain Stephen Decatur and the frigate United States’ capture of the frigate HMS Macedonian, and Captain William Bainbridge and Constitution’s victory over the frigate HMS Java. These and most other victories at sea, however, occurred in the opening months of the war. By early 1813, the British had eleven ships of the line, thirty-four frigates, and fifty-two other vessels operating off North America, while the U.S. had only two frigates at sea.12 By November 1813, the British established a commercial blockade that stopped all traffic regardless of nationality across the entire east coast south of New England.13

The resources of the British Navy quickly overwhelmed the U.S. Navy’s famous heavy frigates. After evading the blockade out of New York in May 1813, Decatur’s squadron of the frigates United States and Macedonian and sloop Wasp had to escape to New London, CT.  They remained there for the rest of the war. After sinking HMS Java, Constitution saw little action. Even though the British did not yet have Boston under a full blockade, they kept “Old Ironsides” in Boston Harbor for most of the war. The frigate Congress managed to slip out of Boston, only to return by the end of the year too damaged to repair. Her guns were stripped and she spent the rest of the war in ordinary. The frigate Constellation never escaped Norfolk throughout the war.14 Again with a voice of reason, Mahan evaluated the U.S. Navy’s conduct of the war at sea accurately:

“Tradition, professional pride, and the combative spirit inherent in both peoples, compelled fighting when armed vessels of nearly equal strength met; but such contests, though wholly laudable from the naval standpoint, which under ordinary circumstances cannot afford to encourage retreat from an equal foe, were indecisive of general results, however meritorious in particular execution.”15

Ultimately, no amount of successful frigate duels could win a war against the most powerful navy in the world.

Earlier in April 1814, the British extended their blockade to include New England. American imports shrank more than 25 percent from 1811 and exports dropped from $108 million in 1807 to less than $7 million.16 In August, the British marched on Washington, D.C. and burned down the capital city. To deny the British any resources, the U.S. Navy burned down the Washington Navy Yard themselves, including the U.S. Navy’s first 74-gun ship of the line, Columbia.  Of the seventeen sea-going U.S. Navy vessels at the start of the war, only seven remained by its end.17 By the end of 1814, the British held almost as many U.S. Navy sailors as prisoners as the U.S. Navy had sailors out to sea.18 Signed on December 24, 1814, the Treaty of Ghent restored pre-war territorial borders but did not address the U.S.’s greatest concern, impressment. The British already ceased the practice. They had far less need for sailors after Napoleon’s defeat at Leipzig earlier in October 1814.

Part Two will provide a counterexample to the U.S Navy’s performance with Master Commandant Thomas Macdonough’s preparations at Lake Champlain.

William graduated from the U.S. Naval Academy in 2009 and served for five years as an artillery officer in the U.S. Marine Corps, deploying to Afghanistan and afloat. He now writes with a focus on early American naval history.