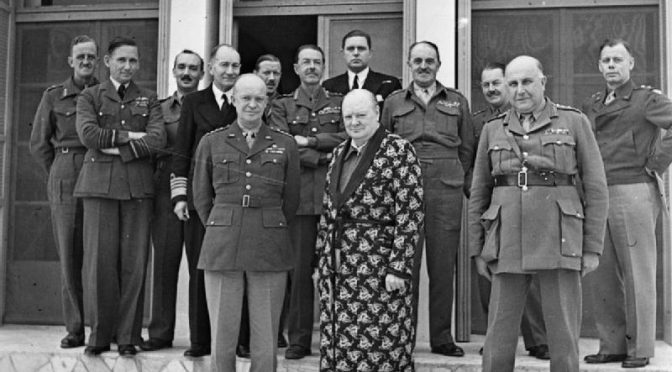 When Dwight Eisenhower assumed command of Allied forces in Europe in early 1943, he faced a daunting task. Not only did he need to prepare to assault the vaunted Germany army, but he faced a complicated set of command relationships. His three subordinates, Harold Alexander, Arthur Tedder, and Andrew Cunningham, were all British officers. Two of the three were from different services. Moreover, they all outranked him! Later in his life, Eisenhower would define leadership as “the art of getting someone else to do something that you want done because he wants to do it, not because your position of power can compel him to do it, or your position of authority.” Eisenhower’s allied command would test, if not forge, this philosophy. In Eisenhower and the Art of Collaborative Leadership, author Kenneth Weisbrode describes Eisenhower’s leadership style both as an Army officer, and later as president.

Two traits stand out in supporting Ike’s “Collaborative Leadership” – his capacity for empathy and his self-discipline. As a middle child in a large family, Eisenhower grew up needing to recognize, adapt to, and shape the feelings of others. In command, he applied these skills. He sometimes reworded messages to subordinates to ensure they had generous interpretations. He spent time in informal conversations with his subordinates outside of meetings to better understand their perspective. As Weisbrode notes, empathy is “not easy in asymmetrical relationships: for the senior there is every incentive to dismiss the views of the less powerful and to get on with things; for the junior there is often thus every incentive to feel undervalued to begrudge this.” The difficulty of displaying empathy highlights the second theme: the importance of personal discipline to Eisenhower’s leadership.

Ike’s particular forte was leading, and keeping together, alliances. Yet, he often complained about exactly that process. In 1942 he wrote in his journal, “My God, how I hate to work by any method that forces me to depend on someone else.” Later he wrote, “What a headache this combined stuff is. We spend our time figuring out how to keep from getting in each other’s way rather than in how to fight the war.” Historians have called Ike’s leadership as president “the hidden hand.” He carefully chose his moments of intervention in discussions so as not to influence them too early, even though he had frequently already thought through the issue at hand. Even his apparently offhand remarks often were not. To so carefully control his own behavior, as well as to excel in work he found frustrating, required immense self-discipline. Perhaps this combination helps explain why, when it flared, his temper was so famous.

While Eisenhower’s understanding of leadership is simple to state, implementing it is less straightforward. The naval service could gain by discussing both of empathy and self-discipline more explicitly in discussions of leadership. We speak of “knowing our people,” but rarely of having empathy for them. The two are similar, but not the same. Empathy requires sensing and understanding the emotions of the other party. Perhaps our general discomfort with emotions explains why we avoid a term that highlights them.

Discipline forms the foundation of any naval organization, but we do not often explicitly acknowledge the challenge of self-discipline. Even Weisbrode does not explicitly speak to the issue despite its frequent appearance in his descriptions. Few people will point out their leader’s failings directly until it is too late. Often, the discipline required is not to restrain oneself from misconduct, but from excessive intervention in the affairs of subordinates. The challenge becomes greater as leaders rise in the ranks, the temptations of authority grow stronger, and they become more confident in their own opinions. A leader’s discipline must be self-discipline.

In summary, while occasionally difficult to follow as it shifts between Eisenhower’s experiences and actions and the philosophy of friendship and leadership, Weisbrode’s short 93-page text provides a leadership study that focuses on less-commonly discussed leadership traits as displayed by one of America’s greatest leaders.

Erik Sand is a Lieutenant Commander in the Navy Reserve and a PhD candidate in the MIT Security Studies Program. The views expressed here do not represent those of U.S. Government, the Department of Defense, or the U.S. Navy.

One thought on “The Secret Ingredients of “Collaborative Leadership””