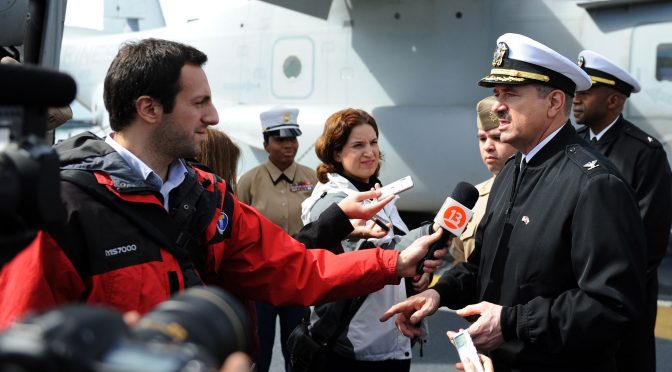 The technological innovations of the twenty-first century are transforming mass communications on a global scale. Organizations are competing in a hyper-competitive and increasingly diverse information environment that demands continuous communication engagement to affirm truth and facts while deterring adversary misinformation.1 This global transformation in mass communication practices is also changing how the world’s militaries are devising their strategic messaging and these changes will have a significant impact on the U.S. Navy’s mission. Public affairs is a command function with responsibilities for commanders at the strategic, operational, and tactical levels that require astute vision, collaboration, and synchronization of messaging and information dissemination.2 The underlying question remains, “How can the Navy’s public affairs program successfully support the U.S. maritime strategy for twenty-first century seapower?”

To achieve success, the Navy must enable public affairs to function as a tool of credibility versus persuasion and spin, it must embody the principles of transparency, and it must better synchronize public affairs with other elements of U.S. information power such as information operations and public diplomacy. The modalities of maritime strategy and the information environment must be examined to provide sufficient context for a discussion about the aforementioned challenges of the Navy’s public affairs program.

The Navy’s Cooperative Strategy for Twenty-First Century Seapower and the Design for Maintaining Maritime Superiority affirm the core tenets of projecting forward naval presence and enhancing maritime partnerships.3 Due to the external nature of these operations combined with a frequent focus in support of U.S. diplomacy, a successful maritime strategy will require sustained and comprehensive communication strategies that are supported at all levels of command. Edward Luttwak notes the unique capability of seapower as a tool for strategic communication given how naval presence and security partnerships convey important political messaging.4 In his critique of the U.S. maritime strategy, Geoffrey Till notes that the “variation and complexity” of such an initiative centered on generating support domestically and internationally to sustain forward presence and security partnerships will require the Navy to “devote significant effort to their strategic communication plan.”5 Admiral John Kirby, the former Pentagon press secretary and spokesperson for the Department of State, argues “the Navy is historically one of the least understood branches, and yet one of the most capital-intensive.”6 As a result, Kirby posits that “any strategy which defines the way the Navy will fight and win” will fail if not supported by domestic stakeholders along with allies and partners, considering how long the U.S. maritime strategy actually takes to render results.7

This challenge compounds the importance of commanders understanding the functionality of public affairs within the context of the information environment, to promote transparency, and ensure messaging is synchronized with other elements of information power in support of the maritime strategy.

The Joint Publication 3-13 Information Operations describes the information environment as “the aggregate of individuals, organizations, and systems that collect, process, disseminate, or act on information.”8 Kirby further characterizes the public domain of the information environment as an evolving space where allies, partners, and adversaries are contending for narratives in real-time on new media platforms such as Youtube, Twitter, Facebook, and a growing portfolio of interconnected online venues.9 With the diffusion of actors and contributors to the modern information environment, and the speed at which information travels, this compounds the notion that tactical actions can have strategic consequences.10 Consequently, operational and tactical commanders must be aware that their units increasingly operate in an atmosphere that is exposed to the public domain via technological innovations of the information environment, and every ship, unit, and headquarters is critical to communication success through their credible and transparent actions.

The function and utilization of military public affairs within the complex information environment is often misunderstood by commanders and organizations alike, which undercuts the enduring value of the discipline to support initiatives such as the maritime strategy. There are well-intentioned commanders who favor more of a shaping or salesmanship function of public affairs operations, a role more attuned to the hybrid public relations-information operations construct of U.S. adversaries.11 Moreover, Kirby argues that commanders often view the information environment as “one they can own and shape at will, one of kinetics,” – which underestimates the complexities and dynamics of an environment that requires comprehensive and persistent communication strategies.12 Kirby further posits that while “rapid reaction and cyber agility” are necessary to counter adversary information, these qualities alone are insufficient:

“Our approach must be bolstered by an unfailing commitment to truthful context and imagery, aggressive transparency and a willingness to overwhelm fake news and media manipulation over time.”13

While Kirby does not discount the need to shape the information environment, he notes that commanders should utilize their public affairs capability as a long-term strategic communication initiative that achieves desired effects with sustained engagement.14 Jeff Davis, a career Navy public affairs officer and former Pentagon spokesperson, argues that the information power of the Department of Defense is harnessed by providing persistent strategic messaging that is “credible, sober, and factual” and grounded in matching deeds with words.15 When this action-communication sequence does not align, it can affect the Navy’s organizational credibility and degrade public trust in the Navy’s forward presence mission. For example, in 2017 the U.S. Third Fleet promulgated a news release announcing the USS Carl Vinson carrier strike group departed Singapore and would “sail North” leading media outlets to assume the aircraft carrier was expeditiously headed to waters in Northeast Asia as a show of force to North Korean provocations occurring at the time.16 The news release declined to note the strike group would make an intermediate routing for an exercise near Indonesia and Australia, inadvertently provoking allegations of U.S. misinformation among international media stakeholders and umbrage from key U.S. allies in South Korea and Japan who perceived a deeds-words mismatch in their commitment to their respective alliances.17

Beyond being credible and accurate, public communication must also be persistent to effectively support the maritime strategy. Collin Koh, a maritime security researcher at the Rajaratnam School of International Studies, notes the information environment demands continuous public communications of U.S. naval presence to demonstrate resolve to allies and partners and deter adversaries from filling in information voids.18 Koh and Dzirhan Mahadzir, a naval analyst, characterize this persistent communication engagement as “normalizing the narrative.”19

Accordingly, Koh and Mahadzir contend that persistent narratives of operations can help deescalate the news cycle over time and thus lower the perception of provocative actions resulting from freedom of navigation operations in the South China Sea if the action-communication is routine and clear in its message.20 It can also be a detriment to commanders when communication is not executed consistently. Lynn Kuok, a security analyst and Yale international fellow, believes the U.S. should routinely release clear details about operations in the South China Sea, i.e. where the operation took place, what the operation did, and what right(s) the U.S. was asserting—simultaneous to or very soon after the conduct of such operations.21 The impact, security analysts note, is to ensure that U.S. forward naval presence can generate favorable strategic outcomes that strengthen the U.S. maritime strategy by publicly affirming navigation rights under international law while deterring China’s public overtures aimed at transforming norms and asserting new customary laws through its shaping of regional and international public opinion.22

Transparency as a Secret Weapon

An emerging concern for external stakeholders of DoD and the Navy is a perceived tilt toward less transparency and openness.23 These concerns are generating contention among journalists, citizens, and analysts of the Navy’s maritime strategy alike with veteran observers such as Thomas Ricks, a former defense reporter for The Wall Street Journal and Washington Post, arguing its negative effects on U.S. national security.24 Ricks points out that commanders tend to operate in a low risk posture as they perceive transparency and openness offer few tangible incentives, particularly at the operational and tactical levels where public affairs release authority is often narrower.25 This growing perception among commanders of a zero-defect environment with public communications limits the potential of U.S. information power.26 Moreover, Davis notes that transparency in public communication provides the U.S. military with an asymmetrical advantage in credibility:

“A transparent, accountable military is our secret weapon. It is what has given us such high levels of trust, both at home and internationally. But that trust is now at risk.”27

Minimizing transparency and engagement with the media, veteran naval reporter Chris Cavas argues, degrades the maritime strategy by limiting the Navy’s ability to use information to “deter adversaries and portray expertise, readiness, and commitment.”28 The Navy recently issued a series of guidance cautioning commanders to limit discussions on capabilities to protect operational security.29 While the guidance does not prohibit commanders from engaging with the media, Cavas contends these overtures are creating a “chilling effect” on the frequency of press engagements and embarkations domestically and overseas among critical allies and partner-nation constituencies.30 As a result, there is a growing cohort of public stakeholders, many who directly impact the sustainability of the maritime strategy, who believe the pendulum of security versus openness in the Navy has swung too far toward secrecy. Representative Mike Gallagher, a member of the House Seapower and Projection of Forces Subcommittee, notes the risk of tepid public communication in the context of sustaining longer term, capital driven initiatives such as the U.S. maritime strategy:

“Despite the old adage that ‘loose lips sink ships,’ non-existent strategic communications can sink entire navies. If the bias is towards silence to prevent adversaries from finding out about unique capabilities or potential weaknesses, guess what, there will never be a public constituency for acquiring or mitigating them. And, oh by the way, our adversaries probably have a decent idea of what we’re up to anyways.”31

These critiques present a difficult, yet necessary balancing consideration for the Navy’s leadership that will require increased attention and risk-benefit analysis. However, Admiral James Stavridis (ret.) posits that commanders still have many opportunities to foster transparency with the media and public within the Navy’s current guidance.32 Limiting press engagement, Stavridis argues, strips commanders of an important tool to enhance their mission and ensure that tactical and operational successes lead to strategic value.33

In Part 2, we will explore how to synchronize information power to enable maritime strategy, along with several counter-arguments and perspectives.

Lt Commander Arlo Abrahamson is a recent graduate of the Naval War College and a career Navy public affairs officer. He has served globally supporting strategic communication, security cooperation, and public diplomacy initiatives for the U.S. Department of Defense and Department of State. These views are his own and do not necessarily reflect the official position of the U. S. Government or the Department of Defense.

23 Adam Smith, “The Pentagon is getting more Secretive, and its hurting Nation Security,” Defense One, Oct 28, 2018, https://www.defenseone.com/ideas/2018/10/pentagons-getting-more-secretive-and-its-hurting-national-security/152345/.

26 James Stavridis, “It’s been over 300 days since a Pentagon Press Briefing: That should concern all Americans including the Military,” Time Magazine, April 16, 2019, http://time.com/5571643/pentagon-press-briefings/.

28 Chris Cavas, “Does the U.S. Navy have a Strategy Beyond Hope,” Defense News, January 4, 2018, https://www.defensenews.com/digital-show-dailies/surface-navy-association/2018/01/04/does-the-us-navy-have-a-strategy-beyond-hope/.

30 Chris Cavas, “Does the U.S. Navy have a Strategy Beyond Hope,” Defense News, January 4, 2018, https://www.defensenews.com/digital-show-dailies/surface-navy-association/2018/01/04/does-the-us-navy-have-a-strategy-beyond-hope/.