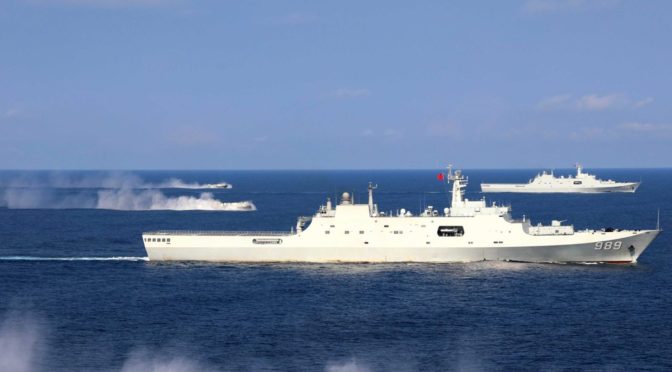 The following article originally published on Forbes and is republished with permission.

Pentagon force planning is a dense and complicated blend of assumptions and projections, but operational scenarios are its most impactful ingredient. Their importance varies as administrations change and threats come and go, but depictions of the situations U.S. military forces and systems need to address are essential to setting investment priorities. Unfortunately, organizational inertia and a desire to compete for dollars lead U.S. military services to plan for scenarios that privilege their largest existing programs–even as America’s adversaries are moving on to an entirely different type of warfare.

During the past decade, DoD naturally focused its planning on peer competitors China and Russia or nuclear-armed rogue states like North Korea. The most stressing campaigns U.S. forces could face against these adversaries dominate DoD analysis, under the assumption that worst-case scenarios like an invasion of Taiwan also capture the needs for “lesser-included” cases like a lengthy blockade of Japan’s southwest islands or a sustained submarine threat off the U.S. coast.

Recognizing DoD’s focus on high-intensity warfighting, its potential adversaries are methodically developing strategies and systems that circumvent the U.S. military’s advantages and exploit its vulnerabilities by avoiding the types of situations for which U.S. forces have prepared. DoD may be falling into a trap by continuing to use a narrow set of high-intensity conflicts as its pacing threats.

As part of their efforts to bypass U.S. military strengths, the Chinese and Russian militaries seek to make information and decision-making the main battlegrounds for future conflict. Concepts such as the People’s Liberation Army’s System Destruction Warfare or the Russian military’s New Generation Warfare direct forces to electronically or physically degrade an opponent’s information sources and communications while introducing false data that erodes the defender’s orientation and understanding.

In their hybrid or gray-zone campaigns, Chinese and Russian military and paramilitary forces complement information operations by isolating or attacking opponents without significantly escalating the confrontation. Avoiding actions that provide a rationale for U.S. retaliation narrows the options available to U.S. commanders and provides Chinese and Russian forces a decision-making advantage.

Decision-centric operations like those pursued by the PRC and Russian governments will likely be a significant form of future conflict, especially as more confrontations occur outside the context of large-scale existential combat where attrition could be more decisive.

During the late Cold War, the U.S. military’s revolutionary approach to precision-strike warfare leveraged the then-new technologies of communication datalinks, stealth, and guided weapons. Similarly, decision-centric warfare may be the most effective way to militarily exploit artificial intelligence and autonomous systems, which are arguably today’s most prominent technologies.

The characteristics that win decision-centric operations will not be the ones prioritized by attrition-centric scenarios driving Pentagon planning today. Instead of lethality and survivability being all that matter, adaptability and sustainability will provide an advantage in conflicts where information and decision-making form the main lines of effort. The commander that is able to retain more options over a longer time during an informationized confrontation is more likely to make better or faster decisions than the leader of a less adaptable force. Moreover, the more adaptable force will be able to impose greater complexity and degrade the decision-making of opposing commanders.

A Different Set of Worst Cases

Situations DoD plans for today like short, intense invasions of Taiwan, Baltic NATO allies, or South Korea do not prioritize the adaptability and sustainability needed for decision-centric conflicts. These scenarios favor heavily-armed and well-defended ships, aircraft, and troop formations that are expensive to buy and sustain. Because of their cost, these forces are not available in large numbers; because they are self-contained multi-mission units, they cannot easily be reconfigured or recomposed. And because they are built to fight major theater war, today’s U.S. forces are disproportionate for the sub-conventional confrontations often presented by China and Russia.

The divergence between U.S. defense planning and the changing character of war suggests DoD needs a new set of worst-case scenarios. Like a football team relying on the “prevent defense” to protect against long passes, DoD is leaving itself open to the ground game being pursued by its competitors.

DoD should increase the priority of scenarios that center on information and decision-making, such as protracted blockades or quarantines of allied territory or islands; sustained gray-zone campaigns against allied or partner governments; or air and sea denial operations in international waters or airspace. Instead of quickly turning into canonical invasions, these scenarios could episodically intensify and deescalate over an extended period as the combatants attempt to resolve the confrontation. For example, the ongoing conflict in Eastern Ukraine may be more relevant than Russian tanks rolling across Latvia in 2 days.

The attributes needed for decision-centric conflict are not widely represented in today’s U.S. military, which truly makes these situations worst case for DoD. A set of decision-centric planning scenarios would likely prompt U.S. military services to rebalance away from large, monolithic platforms and formations toward smaller, disaggregated units that include more autonomous systems. In addition to being less expensive to buy and sustain, more disaggregated forces would be more easily recomposed in theater to improve adaptability and give commanders more options.

Unless DoD begins to rethink its scenarios and rebalancing its forces, recent Chinese and Russian gray-zone successes in the East and South China Seas or Crimea could become the norm and the U.S. military could find itself losing a battle of inches against patient competitors who are willing to play the long game.

Bryan is a Senior Fellow at the Hudson Institute, where he leads the Center for Defense Concepts and Technologies. He has led studies during the last decade for DARPA, OSD, the Navy, and the defense industry exploring ways new technologies can be applied to military challenges and operations. Prior to becoming a think tanker, he was a career enlisted and officer nuclear submariner.