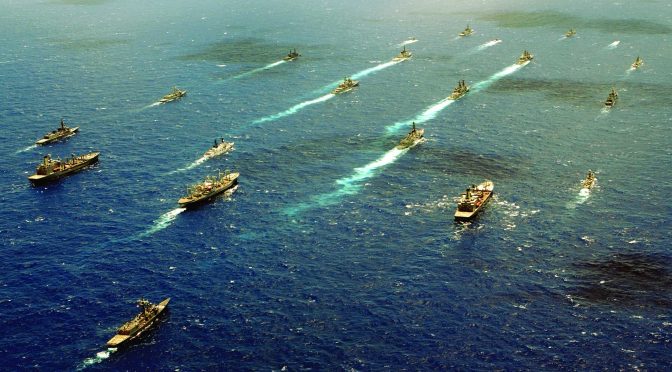 The Awareness of Maritime Dominance

The Nature of Sea Control

The sea itself cannot not be explicitly controlled; neither can it be occupied like land. To exercise sea denial is essentially targeting the attempts or aspirations by other parties to exploit sea space. Basically, there are two different schemes, deterrence and compellence, to achieve sea denial. Deterrence is literally to force other parties not to take certain actions they would rather to do originally. On the other hand, compellence is actually to force other parties to take certain actions that they are not willing to do in the beginning.

One should always recall that the value of maritime space is justified by its connectivity. To secure a maritime space by excluding the presence of other parties through sea denial but in the process also precluding substantial maritime activities (such as civilian commerce) can quickly become counterproductive. However, to dominate a maritime space of poor connectivity is like to occupy a desert none have interest in. To exercise sea control in a maritime space that an adversary rarely ever attempts to challenge can sometimes suggest the maritime space in question is perhaps not so important to a greater ambition of command of the seas.

Last but not the least, three major factors, force, space and timing, at the operational level are still interrelated in exercising sea control. The forces necessary for conducting a sea control scheme are decided by the scale of the maritime space and the length of duration expected by utilizing the maritime activities there. Also, the size of the adversaries’ forces to challenge this privilege may also be the variable in the overall sea control formula. The process of sea control is always interactive.

Conclusion: Can There Only Be One?

Human societies may divide land into different spheres of influence and draw borders, but will this become the case in the maritime space in an era of great power competition? The value of maritime activity is derived from its connectivity. Occupying or dominating a maritime space but disconnecting it from other parts of the global oceans is a misuse of power born from the historical experience of landpower applied to the maritime theater.

Dr. Ching Chang was a line officer in the Republic of China Navy for more than thirty years. As a very productive commentator on the Chinese military affairs, he is recognized as a leading expert on the People’s Liberation Army with unique insights on its military thinkings.

Featured Image: ParticipanxvParticipants from the RIMPAC 2000 exercise establish a flotilla off the coast of Kauai. (Photo via U.S. Military Sealift Command)