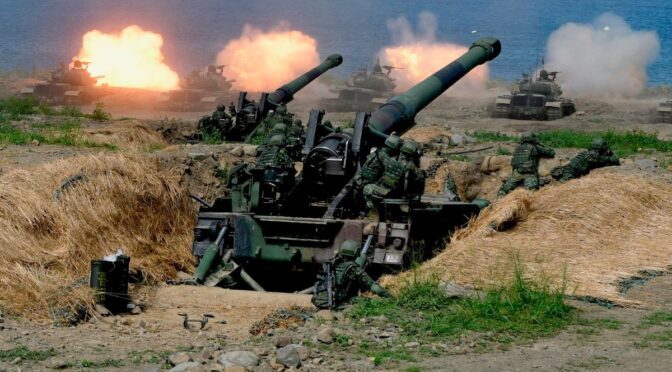 On June 25, 1950, North Korean forces invaded South Korea, sparking the Korean War. The following day, President Harry Truman ordered U.S. air and naval forces to support South Korea’s defense, which the United States would soon thereafter bolster with ground forces. On the same day, President Truman directed the U.S. Seventh Fleet to the Taiwan Strait to prevent any conflict between the Republic of China (henceforth Taiwan) and People’s Republic of China (henceforth China), each of which had been vying to unify with the other under its leadership. Had China taken advantage of the U.S. focus on the Korean peninsula by launching a large-scale invasion of Taiwan (for which it had been preparing), U.S. leadership would have faced the difficult decision between leaving Taiwan to fend for itself or diverting resources from the Korean War to support Taiwan. Although the United States was able to deter China from invading Taiwan in 1950 despite its concurrent commitment of forces to defend South Korea against North Korean aggression, it may not be so successful today or in the near future given the current trend in the balance of military power. Therefore, South Korea and Taiwan must develop credible self-defense capabilities with an eye toward future North Korean and Chinese threats to better support the joint response effort with the United States, which may find itself engaging in a two-front conflict.

Today, both the Korean peninsula and Taiwan Strait remain as flashpoints. South Korea and North Korea are still in a state of war with each other, and the risk of a forcible unification with Taiwan by China has been increasing in conjunction with China’s growing assertiveness in both rhetoric and action. If South Korea is attacked again, the United States has already committed to “mutually meet the common danger,” as stated in the two countries’ mutual defense treaty. While the United States does not make a similar commitment to Taiwan – the U.S.-unilateral Taiwan Relations Act only states that the United States will “maintain the capacity…to resist any resort to force…on Taiwan” – President Joe Biden has thus far for Taiwan. Also, a recent survey showed that the majority of Americans would favor defending Taiwan with U.S. forces if China were to invade the island. Certainly, neither Biden’s statements nor the survey results equate to a shift in the U.S. policy of “strategic ambiguity,” but they do indicate that in a Taiwan Strait contingency, U.S. leadership will seriously consider the level of support for Taiwan, as it did during the mid-20th century.

If the challenges facing the United States in those flashpoint areas have largely remained unchanged, so have the opportunities for China. A future Korean peninsula conflict would consume much of the focus and resources of the U.S. military in the region, which China can exploit to attempt to solve the Taiwan question. However, a scenario in the reverse sequence is also plausible. If China’s leaders determine that a peaceful unification with Taiwan will not be possible by 2049 – the date by which the “rejuvenation of the Chinese nation” is to be achieved – they may decide to resort to force. If the United States commits forces in defense of Taiwan, North Korea may sense a weakness in the U.S.-South Korea alliance and also launch an attack on its southern neighbor. As China and North Korea are treaty allies, they may discuss, plan, and execute such a two-pronged attack specifically designed to split US forces. After all, in 1950, North Korean leader Kim Il-sung sought and received approval from China’s (and the Soviet Union’s) leaders prior to North Korea’s invasion of South Korea.

While there are presently no indications that a major conflict in the Korean peninsula is imminent or even brewing, the two Koreas have come close to war before, perhaps most recently in 2010 following the sinking of South Korean navy ship Cheonan and bombardment of Yeonpyeong Island. Even as South Korea’s president Moon Jae-in pushes for a breakthrough in inter-Korean relations in his final months in office, however, the two countries are seemingly engaged in an arms race, with North Korea recently having tested a hypersonic missile and South Korea a submarine-launched ballistic missile.

On the other hand, cross-strait relations have deteriorated in recent years and Taiwan has come to dominate the discussion surrounding the U.S.-China strategic competition. Amid revelations of U.S. forces training the Taiwanese military, Taiwan’s president Tsai Ing-wen has expressed “faith” that the United States would support the defense of the island. China has reinforced its vows for unification with Taiwan with its military aircraft’s incursions into Taiwan’s air-defense identification zone at an unprecedented frequency and numbers as well as military exercises in the vicinity of the island. And unlike in 1950, when the U.S. military was undeniably superior to China’s, China has embarked on an impressive modernization streak and has “achieved parity with – or even exceeded – the United States in several military modernization areas.” If China is determined to unify with Taiwan by force, it will most likely be undeterred by a U.S. show of force.

How can the United States best prepare for two simultaneous major conflicts in East Asia? The answers are numerous and range from posturing additional forces in the region to securing commitments from other allies and partners to deter aggression from North Korea and China. Another key mechanism that must not be overlooked is incentivizing South Korea and Taiwan to acquire the appropriate capabilities required to specifically defeat North Korean and Chinese invasion forces, respectively. For South Korea, that might include anti-missile systems, platforms to counter maritime special operations forces insertion, and advanced weaponry and equipment for its ground forces. For Taiwan, acquisition of anti-ship and -air missiles and hardening of critical infrastructure may be the wisest investments. Taiwan has previously been criticized for both lackluster defense spending and purchasing tanks and howitzers with questionable operational value in the face of the growing Chinese threat, but relevant defense investments become dire when accounting for the potential division in U.S. attention and resources towards multiple contingencies.

The purpose of this article is not to specify which equipment South Korea and Taiwan must acquire; rather, it is to emphasize that the military equipment they do acquire must be based on North Korea and China’s current and future military capabilities that are expected to be employed for an attack on South Korea and Taiwan. By acquiring appropriate capabilities, the two countries will significantly raise the risk of attack by their adversaries, perhaps to the degree that they reassess the likelihood of a successful invasion. At a minimum, by developing the ability for a self-sufficient defense, South Korea and Taiwan will be helping themselves by enabling the United States to employ its limited resources efficiently to support the defense of the two countries, especially if anticipating simultaneous conflicts.

The acquisition of “flashy” capabilities may be tempting in general and more so if they are perceived to signify an advanced military; however, all military equipment has a limited scope, and acquiring a specific capability creates an opportunity cost that prevents a country from acquiring another, more-justified capability. This is an especially important point to consider for South Korea and Taiwan, which have an aggressive neighbor whose stated policy is to unify with each country.

Ki Suh Jung is a U.S. Navy foreign area officer with experience in the Asia-Pacific. The views expressed are those of the author and do not necessarily reflect the official policy or position of the U.S. Navy, Department of Defense, or the U.S. Government.