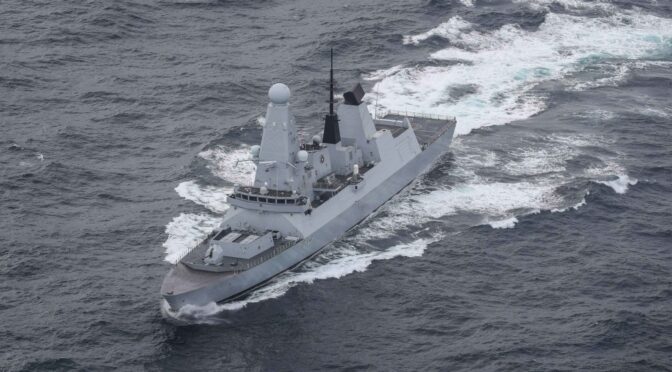 On the morning of June 23, 2021, the Royal Navy destroyer HMS Defender departed its port of call in Odessa, Ukraine, and made way for Batumi, Georgia. While in transit, the destroyer conducted a Freedom of Navigation Operation (FONOP) near the southwestern tip of Crimea, triggering a Russian reaction comprising at least three ships and dozens of aircraft. The incident is the latest flare-up in the Russo-Ukrainian conflict, yet escalation risks from encounters in the maritime domain are often overplayed by inflammatory communiqués. The crux of the matter remains international law, and information warfare, while harmless posturing is simply the most visible outcome. Diving deeper reveals the determinants behind the UK’s actions, from operational imperatives to legal standings, but also a changing European strategic direction.

The Incident at Sea

Prior to the incident, Defender entered the Black Sea along with the Dutch frigate HNLMS Evertsen to carry out exchanges and exercises with the Romanian, Ukrainian, and Georgian navies. Both ships are part of Carrier Strike Group 21, centered around the aircraft carrier HMS Queen Elizabeth. After departing Odessa, Defender proceeded towards the traffic separation scheme off Cape Florient at the southwestern tip of Crimea. While following the traffic separation scheme, the destroyer briefly entered one of three restricted navigation zones (highlighted in red on the map below) implemented contentiously by Russia within the 12 nautical mile limit of Crimea’s territorial waters.

Upon entering the restricted navigation zone, Russian Coast Guard vessels hailed Defender over the radio and urged it to turn away. After several further communications, a Russian Coast Guard vessel fired three short bursts high into the air, at an angle slightly offset to that of the British destroyer, only after several ‘avoid hit’ commands were given to the gunners. Traditionally, warning shots are fired across the bow of a targeted ship, as they are meant to be noticed and unambiguous. However, for uncertain reasons,1 it appears that in this case the Russian vessel was at least a kilometer behind Defender—hence qualifying the bursts as ‘warning shots’ is a stretch.

The Defender’s transit through Crimean territorial waters came after Russia issued a Notice to Mariners (NOTMAR), which suspended the right of ‘innocent passage’ to foreign warships in the three previously mentioned restricted navigation zones from April 21 to October 31, 2021.2 The right of innocent passage is enshrined in the United Nations Convention on the Law of the Sea (UNCLOS), Articles 17 to 32. UNCLOS allows for any ships to transit through the territorial waters of another nation if they follow certain broad conditions.

Under UNCLOS Article 25(3), coastal states can implement restrictions on navigation, provided they remain temporary, indiscriminate, and localized. The notice issued by Russia is problematic, not only because it discriminates between “foreign warships and other government ships” and other shipping, but also because it assumes Russia is the coastal state. This latter assumption is rejected both by any reasonable interpretation3 of international law and the United Nations General Assembly Resolution A/RES/68/262.4

However, another regime of international law is at play in Crimea and would support Russia’s NOTMAR—namely, the law of armed conflict and the law of occupation, as articulated by Prof. Stefan Talmon for GPIL – German Practice in International Law.5 The law of occupation provides the occupying power with a wider range of options to restrict navigation in occupied territorial waters as “land dominates the sea,”6 and an occupying power inherits controlling rights over the occupied territory’s territorial waters. This would appear contradictory to Russia’s position regarding Crimea, as it no longer differentiates between Crimea and the rest of the Russian Federation since the contentious Crimea-Russia annexation treaty7 signed by Vladimir Putin on March 18, 2014, and ratified8 by the Duma and Federation Council on March 20 and 21, respectively.9

The Russian attempt to restrict navigation off Crimea would therefore appear to satisfy the conditions required under international law, but a final hurdle remains in the way of conferring it full legitimacy; the NOTMAR mentions “Russian territorial waters” while referring to the waters off Crimea, which is currently considered to be under “temporary occupation.” Prof. Talmon points out that the United States issued a similar NOTMAR during the occupation of Iraq, with the notable difference that it had appropriately referred to the waters in question as “Iraqi territorial waters.” Therefore, a state rejecting the annexation of Crimea would be inclined to ignore the Russian NOTMAR despite its otherwise robust legal standing.

Following the incident, Russian government sources and media announced that Russian vessels and aircraft fired warning shots at Defender and dropped bombs in its path.11 The Russian government also filed a formal protest and summoned the British ambassador and defense attaché in Moscow. London denied both the shooting and the bombing, possibly on the grounds of lexical accuracy—as the Russian vessel fired ‘near’ and not ‘at’ the British ship—and appeared to present the scuffle as an unrelated gunnery exercise conducted by Russia.12 This would be a tongue-in-cheek way of dismissing the shots as coincidental, therefore watering down Russia’s confrontational narrative.

The presence of a BBC crew aboard Defender further enabled London to deny any excessive Russian declarations. Moscow later published a video13 filmed aboard one of its Coast Guard vessels, showing the moment it fired the alleged warning shots. However, evidence of the shooting had already been broadcasted by the BBC, so the Russian footage achieved little beyond showcasing the significant distance between the two ships, thereby bolstering the British narrative that the incident was over-exaggerated by Russia.

The waters around Crimea are a niche aspect of the Ukrainian conflict to challenge. In the maritime domain, the most pressing issue remains the blocking of the Kerch Strait since 2018, for which no FONOP is realistically achievable.14 The British intent behind the FONOP is better unraveled through the strategic implications of the ‘special relationship’ between London and Washington than by any development in the Ukrainian conflict. By carrying out this FONOP in the Black Sea and dispatching the first planned Royal Navy carrier strike group in the Indo-Pacific since 1997,15 16 London is marking its return to the geopolitical scene, at home in Europe and abroad in the Indo-Pacific.

For the United States, having a partner willing to commit politically and operationally to a like-minded view of the global rules-based order is valuable, as U.S. Secretary of Defense Lloyd Austin alluded to in his comments17 during the 2021 IISS’ Fullerton Lecture in Singapore. U.S. resources are increasingly scarce and being able to rely on a pro-active ally in Europe will prove helpful as the Pentagon shifts much of its focus from Europe to Asia. Finally, far from a unilateral move by Britain pursued in the wake of Brexit, this FONOP was supported by European partners, both in actions and words: in addition to the endorsement of the Netherlands via Evertsen, Germany was quick to officially denounce the Russian claims as a breach of international law after the incident.

Despite its limited immediate impact, the significance of this FONOP cannot be overstated. Since the end of the Cold War, very few European nations have taken initiatives to upend their strategic interests in the face of powerful adversaries and have instead been relying on the American security umbrella. A multitude of factors are at play to influence this return to geopolitics in Europe, from the specter of Trump’s alienating policies towards America’s allies and partners, to the advent of a multipolar world. Yet this FONOP and renewed European interest in the Indo-Pacific shows that even a strategically independent Europe will remain a natural partner to America for military cooperation and burden-sharing, not just due to shared economic interests, but also common values.

Louis Martin-Vézian is a French student of Economics and Politics at the University of London in Singapore. He has been producing maps and infographics for the past 6 years on his blog, CIGeography, with a focus on defense and security.

[1] Okhotnik-class patrol ships have a stated maximum speed of 27 knots, so it is possible they were outran by the 30+ knots of the British destroyer.

[9] The treaty is subject to its own controversies, as under international law, treaties must be signed between a minimum of two states; and the Republic of Crimea was never recognized as a state during its brief, forty-eight hours existence. See: https://digital–commons.usnwc.edu/cgi/view-content.cgi?referer=&httpredir=1&article=1377&context=ils

[14] Even ignoring legal hurdles, a FONOP in the Kerch Strait would be challenging, as a simple scuttling under the Kerch bridge could trap a foreign vessel in the Sea of Azov.

[16] In 2013, the HMS Illustrious was also dispatched to the Philippines to carry out humanitarian assistance and disaster relief operations in the wake of Typhoon Haiyan; but this deployment was a diversion from its intended course in the Persian Gulf. See: https://www.gov.uk/government/news/royal-navy-carrier-returns-home-from-philippines

One thought on “The HMS Defender Incident: Lawfare, Optics, and a Changing European Strategic Direction”