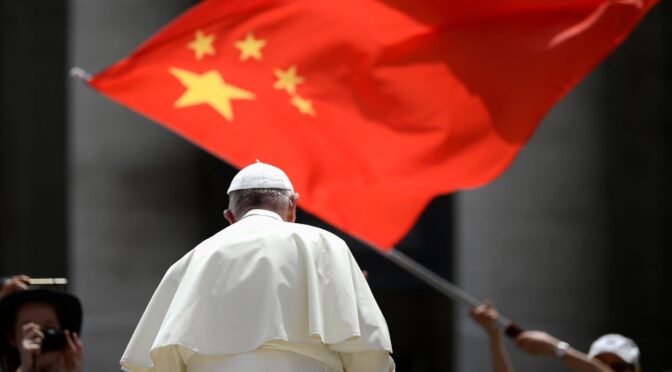 Two years ago, this author on CIMSEC forewarned of a fracturing Vatican-Beijing deal. On September 21, 2018, to the surprise of many, Pope Francis signed a confidential agreement giving Beijing effective control over who chooses church leaders inside China. The faithful, particularly the 12 million Catholics within China, largely viewed the settlement as a risky proposition based on a flawed understanding of the Chinese Communist Party (CCP). Many believed then that the ill-advised accord would be yet another episode of Beijing making hollow promises to buy more time and space to strengthen its positions and weaken the Church’s positions for future political advantages and eventual contract defaults.

How right they were. By 2021, China broke the controversial deal despite perfunctorily renewing the agreement the year before. Beijing also steadily deepened and widened its oppressive “sinicization” campaign against the Christian faith (with an estimated 90 million Christians within China) as well as other perceived threats to CCP ideology like Islam, Tibetan Buddhism, and Falun Gong. Party officials assert that Christianity can only exist in China when it is concordant with Chinese culture, which they define as the incontrovertible doctrine of the CCP. As such, Christianity cannot co-exist in Communist China.

The religious persecution in China presents a spiritual and political dilemma for the Vatican. The question becomes: How should the Holy See respond? With continued willful blindness in the wishful hope of Chinese benevolence or with determined resolve akin to Pope (Saint) John Paul II’s spirited crusade against Soviet Communism? The geostrategic conditions may be right for the latter. Otherwise, Pope Francis risks further alienating persecuted Chinese Catholics and disillusioned Catholics at large; exacerbating the growing perception of his acquiescence to Beijing’s national will; and ceding papal moral authority through his silence on human rights in China.

Having secured the Vatican’s unwitting assistance in weakening the Chinese Catholic Church (largely driven underground), CCP Chairman Xi Jinping quietly and incrementally reneged on the commitments. Last November, shortly after speciously renewing the 2018 deal, Beijing issued Order No. 15, comprised of new administrative rules for religious affairs to include a nondescript article for establishing a “Chinese process” for the selection of Catholic bishops in China after May 1, 2021. The new policy makes no proviso for any papal role in the selection process, not even a papal right to approve or veto pontifical appointments in China, a key concession to the Vatican in the 2018 agreement.

The new rules mandate the clergy to “adhere to the principle of independent and self-administered religion in China.” The specific language complies with a longstanding passage in the membership pledge of the so-called Chinese Patriotic Catholic Church (CPCC), which all Chinese clergy are required to sign. In practical terms, they must now be autonomous from the Vatican. The new rules also require that CPCC-aligned clergy support the CCP and promote “social harmony” by which Beijing means conformity with the Party’s thinking. Rule enforcement is assured by a statute directing that those entering religious vocations “be regulated through strict gatekeeping, verification of identity, and registration.” Registration is managed by a national database of certified (vetted) clergy whose ecclesiastical behavior is governed by a rigid social system of rewards and punishments. In other words, the new rules aim to transform Christianity into another political and social apparatus of the CCP.

To date, the Vatican has kept quiet and not publicly commented on Beijing’s duplicity. Dealing with China is a risky game because the CCP does not play by the established rules or social norms. Beijing often makes empty promises to achieve its short-term objectives and buy time and space to set the conditions to realize its long-term goals. Beijing accordingly honors bilateral agreements to the extent that they serve its ends. Beijing has no qualms about breaking its end of a bargain after the other party has fulfilled its obligations.

The Vatican wrongly assumes that Beijing’s public acknowledgment of pontifical authority matters in Communist China and falsely hopes that the Catholic Church will eventually have greater influence and freedom in church affairs within the authoritarian Chinese state. Church leaders, like many secular contemporaries, still cling to the discredited political theory (flawed policy assumption) that China’s economic rise and concomitant social development will eventually lead to democratic reforms. They simply do not understand the true nature of the CCP and underestimate and underappreciate its foremost priority – the survival of the Party. The CCP will not tolerate anyone or any organization (institution) undermining its ruling legitimacy and authority as evidenced by its unrelenting drive to ensure everyone is loyal to the atheist CCP before anything else.

Church leaders inexplicably still do not acknowledge (or perhaps conveniently ignore) the philosophical dichotomy between Catholic and CCP doctrines. The authoritative role of the Church as both a religious and temporal power providing spiritual guidance to the masses will always challenge Beijing’s authoritative rule that holds there is a natural harmony of universal order. In effect, conflict exists over who should be responsible for developing humanity in China, underscored by CCP officials stating that “Christianity does not belong in China.”

All in all, Beijing believes that Chinese Communism is the one and only true religion in China, and the CCP is its one and only church and clergy. For the Party, all religious issues have a bearing on “social harmony, ethnic solidarity, and national security” and therefore all religions within China must adapt themselves to the socialist society and by extension to the CCP doctrine. The “sinicization” of religions is part of a larger effort to reinforce the “CCP’s control over all aspects of Chinese life to include religious faith, culture, and public discourse.” Those deemed threatening to the Chinese state are sent to “political sessions” for reprogramming as part of the CCP’s crackdown on unsanctioned religious activity.

The geostrategic conditions may be right for a more assertive Vatican. The international community is wary and resentful of China’s complicity in the global coronavirus pandemic, and therefore, more attentive to the genocide of the Uyghurs, suppression of Hong Kong, intimidation of Taiwan, predatory loan practices (Belt Road Initiative), opportunistic vaccine diplomacy, and aggression in the South China Sea.

Moving forward, the Vatican would be prudent to consider the following 10 measures to impose costs and deny benefits to Beijing for violating the conditions and principles of the 2018 agreement. Otherwise, inaction risks rewarding bad behavior and encouraging more bad behavior.

Publicly call out Beijing for its broken promises. Take and hold the information high ground by dictating the strategic narrative, seizing the strategic initiative, and exercising strategic clarity. Respond strongly, unambiguously, and credibly to the expected Chinese backlash of diplomatic, media, and information operations activities. Prepare for potential Chinese overreactions like a nationwide crackdown of the Catholic faith in China (more closure of churches, increased imprisonment of clergy, formal ban on worship, etc.). Highlight the damaging overreach to underscore the CCP as a repressive state that persecutes all perceived threats to its authoritarian rule. Undermine the carefully cultivated Chinese image (brand name) as a benevolent global power that respects human rights. Underscore the blatant hypocrisy.

Accept responsibility for the ill-advised deal and take steps to regain the trust and confidence of the many disillusioned faithful. Be again that “shining city upon the hill” – the undisputed spiritual authority and moral compass for the 1.2 billion Catholics across the globe. Take to heart the proverb “evil triumphs when good men do nothing.”

Apply pressure asymmetrically to keep Beijing off-balanced. Expand diplomatic ties with Taiwan and encourage more diplomatic recognition from the other  countries. Give more economic aid to developing countries to promote good governance and increase their resiliency and resistance to Chinese malign influence. Expect and prepare for Chinese asymmetric counter-pressures across the diplomatic and economic realms. Strengthen cybersecurity posture and take active measures to counter likely cyber-espionage of diplomatic communications and cyber-attacks on infrastructure and financial systems.

Take counsel from informed strategic thinkers like retired Cardinal Joseph Zen, the much-respected former archbishop of Hong Kong who intimately understands the true nature of the CCP and has fearlessly challenged them for decades. Identify, develop, and empower the next Cardinal Zen(s). Do not select (propose) candidates based on Beijing’s preference or political expediency. Rather, select bold and resolute spiritual leaders that will guide and shepherd the flocks within China and the greater Indo-Pacific.

Use the papal pulpit for strategic communications. Beijing will employ public diplomacy, media, social media, and information operations (United Front) to control the narratives. Reciprocate in kind but maintain the moral high ground. Be clear, resolute, and consistent in public and private statements. Do not make statements that send the wrong strategic signal to Beijing. Avoid defeatist statements like the “Church has no positive contribution to make in Hong Kong.”

Follow in Pope John Paul II’s footsteps and launch a “global revolution of the spirit” to actively confront Chinese Communism. Partner with political, economic, and social leaders and organizations to persuade, and when necessary, compel China to become a responsible and contributing stakeholder in the international community. One promising collaborative opportunity may be Washington’s growing campaign to counter Beijing by highlighting its blatant violations of democratic rights. U.S. President Biden can frame the geopolitical contest as a confrontation of democratic values, while Pope Francis can frame the socio-theological contest as a confrontation of moral values. Both leaders and their allies and partners can and should stand up against this “model of authoritarian repression that China seeks to impose on the rest of the world.”

Conduct a papal tour of and periodic visits to Asian countries with large Catholic populations (China, Japan, South Korea, Philippines, Vietnam, and India). Exhort regional governments, rally the faithful, and marshal a consensus of like-minded state and non-state actors to dissuade China from trying to change the global status quo and undermine the rules-based liberal international order that has provided global security and prosperity for over 70 years.

Form a religious coalition (communion) of persecuted faiths in China. Unify collective actions to highlight the many Chinese human rights violations. Initiate and sustain a global “name and shame” campaign against Beijing and any state and non-state actors that support and enable China’s bad behavior.

Be wary of Chinese “sharp power” to infiltrate and undermine Vatican politics, while furtively promoting a positive image of China and misrepresenting or manipulating information to engender favorable policy outcomes from the Holy See.

Be wary of future Chinese settlement offer(s). Do not rush again into negotiations or settle too early. Vatican negotiators would be well-served to heed Chinese promises privately made across the negotiating table and assurances publicly given in the open press. Beijing often gives expedient guarantees during negotiations but rarely offers much that is substantive and enduring in the end. Signing an agreement is merely the start of the real negotiations for the Chinese. Demand transparency (full public disclosure). Publish the entire signed agreement, not just the summary as Beijing has insisted in the past. Be mindful of the adage “fool me once, shame on you…fool me twice, shame on me.”

At the end of the day, Beijing does not seek win-win, they seek win-lose; and when it comes to the battle for the heart and soul of the Chinese people, there can only be one winner – the CCP.

Tuan Pham is a widely published strategic thinker and strategist with over 20 years of experience in the Indo-Pacific. The views expressed here are personal and do not reflect any positions other than his own.

Featured Image: A worshipers waves the flag of China as Pope Francis leaves following the weekly general audience at St. Peter’s square in the Vatican in June. (Photo AFP)

One thought on “Buyer’s Remorse: The Vatican-Beijing Deal Fractured”