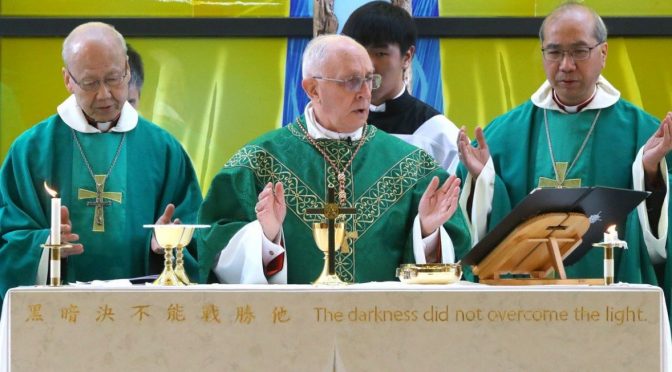 Last September, to the surprise of many, Pope Francis signed a confidential agreement giving Beijing effective control over who chooses church leaders within China. The settlement was largely viewed by the faithful as a risky proposition based on a flawed understanding of the Chinese Communist Party (CCP). Many believed the agreement will be yet another episode of Beijing making hollow promises in order to buy more time and space to strengthen (or hedge) its positions for future political advantages. Months after the landmark deal, Beijing continues to brazenly renege on the agreement underscored by its deliberate snubbing of the pope during Chinese President Xi Jinping’s first state visit to Italy (March 21-23) since the historic agreement.

On March 1, speaking at a conference on Vatican diplomacy, Cardinal Pietro Parolin (the Holy See’s Secretary of State) defended the controversial deal and emphasized that it is now important “to make the China deal work in practice…and put into effect the agreement.” A few days later, during a visit to Hong Kong, Cardinal Fernando Filoni (special papal envoy) highlighted ongoing efforts to unite the official and underground Catholic churches within China and the need to be patient and positive about the reunification of the churches. The remarks came two days after Bishop Paul Meng Qinglu, the deputy chairman of the Chinese Catholic Patriotic Association (Beijing-loyalist group), stated that the agreement would be reviewed in two years. Altogether and put into context, are the cardinals’ statements tacit acknowledgments (and growing signs of frustration within the Vatican) of Beijing’s blatant breach of contract, public relations (spin control) efforts, or the belated, albeit subtle and diplomatic calling out of wayward Chinese behavior? Or simply more misplaced optimism from key papal foreign policy advisors? Nevertheless, the heart of the matter now is what can and should the Holy Father do about the fracturing agreement?

The Vatican assumes that Beijing’s public acknowledgment of pontifical authority will matter in Communist China, and hopes the Catholic Church will eventually have greater influence and freedom in church matters within the Chinese state. Church leaders fundamentally do not understand the true nature of the CCP, and underestimate and underappreciate its foremost priority – the survival of the Party. The CCP will not tolerate anyone or any organization (institution) that has the potential to undermine its ruling legitimacy and authority as evidenced by its unrelenting drive to make sure everyone is loyal to the atheist CCP before anything else.

Despite the seemingly binding agreement, Chinese government officials continue to crack down on religions and persecute Christians. There has been a recent surge in police and government actions against churches in China, and increased government pressures toward Christians to join the state-sanctioned churches (administered by approved priests). The main targets of the latest round of religious persecution appear to be unregistered (or underground) churches that have refused to align with Beijing-controlled associations that oversee religious institutions in China. On March 12, Xu Xiaohong – chairman of the National Committee of the Three-Self Patriotic Movement (government-controlled body that runs state-approved churches) – threatened to eliminate foreign influence in all churches in China and proposed to establish its own Chinese theology, drawing on the traditions of Chinese culture to promote and practice the core values of socialism.

Beijing still coerces citizens to renounce their faiths on paper in accordance with Xi’s policy to “sinicize” all religions, bring them more firmly under Beijing’s control, and make sure that they do not offer alternate viewpoints to the CCP – the highest and absolute political, legal, and moral authority within the country. As part of that policy, Beijing will subtly and incrementally enhance and expand its influence over clerical appointments and religious teachings to underscore nationalism and patriotism and to promote social stability.

Beijing often makes grandiose gestures and empty promises to achieve its short-term objectives in order to buy time and space to set the conditions for realizing long-term goals. Beijing did not honor the 1984 Joint Declaration with the United Kingdom to keep Hong Kong free, and has even declared in 2017 that the declaration “no longer had any practical significance.” Beijing broke a bilateral agreement with Manila to mutually withdraw from Scarborough Shoal and then illegally seized the Shoal in 2012. Beijing reclaimed over 3000 acres of land in the South China Sea over the next five years despite a 2002 agreement with the Association of Southeast Asian Nations (ASEAN) to not change any geographic features in the contested and disputed waters, and then broke the 2015 agreement between Xi and then President Barack Obama to not militarize them. More recently, there is mounting evidence that Beijing reneged on another 2015 Xi-Obama agreement to stop cyber espionage through the hacking of government and corporate data. Therefore it is hardly surprising to see the Vatican’s agreements with China being broken.

Moving forward, the Vatican (and others engaging in relations with China) would be prudent to consider the following if Beijing continues to violate the conditions and principles of the agreement:

(1) Do not mistake grand gestures (perceived concessions) as indicators of enduring commitment to the deal.

(2) Be vigilant for additional contraventions of the agreement and be willing to publicly call Beijing out on them.

(3) Be ready to terminate the deal for breach of contract.

(4) Prepare to impose cost by following in Pope John Paul II’s footsteps to actively confront Chinese Communism to include a “global revolution of the spirit” against its many human right violations.

(5) Be wary of Chinese “sharp power” to infiltrate and undermine Vatican politics, while furtively promoting a positive image of China and misrepresenting or manipulating information to quell policy dissent and dialogue within the Holy City. (6) Avoid being drawn into Beijing’s political games to diplomatically and economically isolate Taipei. China will persist in persuading (and coercing) the Vatican to cut diplomatic ties with Taiwan (quid pro quo).

(7) Disclose the conditions of the deal to regain trust and confidence amongst the skeptical faithfuls within and outside of China.

(8) Take counsel from informed thinkers like retired Cardinal Joseph Zen, a former archbishop of Hong Kong, who intimately understands the true nature of the CCP and has fearlessly challenged them for decades.

All in all, Beijing believes that Chinese Communism is the true religion, and the CCP is its one and only church and clergy. For the Party, all religious issues have a bearing on “social harmony, ethnic solidarity, and national security” and therefore all religions within China must adapt themselves to the socialist society. The “sinicization” of religions is part of a larger effort to reinforce the CCP’s control over all aspects of Chinese life to include religious faith, culture, and public discourse.

At the end of the day, Beijing does not seek win-win, they seek win-lose, and when it comes to the battle for the heart and soul of the Chinese people, there can only be one winner – the CCP.

3 thoughts on “How the Vatican-Beijing Deal Is Fracturing”