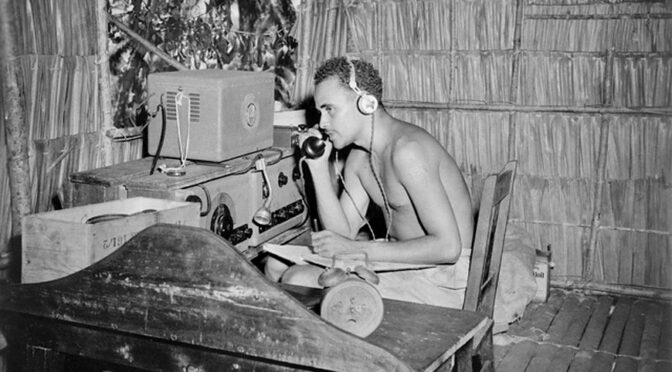 Following World War I, Australia and New Zealand each began building an intelligence network along their coastlines and the archipelagos of the South Pacific. The Royal Australian Navy viewed the chain of islands north of Australia, “as a fence, but a fence with several gates; the straits between the islands.”3 This concept became the reconnaissance screen of the Coastwatchers. The Australian Coastwatchers were known as Operation Ferdinand, after the children’s book character Ferdinand the Bull. The name was, “a reminder to them that it was not their duty to fight, and thus draw attention to themselves… it was their duty to sit, circumspectly and unobtrusively, and gather information. Of course, like Ferdinand, they could fight if they were stung.”4 Together, the interlocked Australian and New Zealand Coastwatching networks spanned from New Guinea in the northwest to the Pitcairn Islands in the east.5 The tele radios and existing radio stations that connected these locations enabled a time advantage in intelligence communication, contributing to the Allies’ success in many battles. The networks provided the Allies with a vast intelligence capability for naval operations in the Pacific.

Both the Australian and New Zealand Coastwatcher networks were proactive in establishing themselves during the interwar years. The Australian Coastwatcher network began in 1919 and New Zealand began its Coastwatching program in 1929.8 Although the Coastwatchers effort was expanded when war began, the early action taken to create the Coastwatchers proved valuable when war broke out in 1939 and as Japan joined the Axis powers in 1940. Commander Eric Feldt of the Royal Australian Navy served as the Supervising Intelligence Officer of Operation Ferdinand’s Northeast Area for several years.9 He summarizes the importance of a proactive intelligence network, “by September 1939, the Coastwatchers were eight hundred strong, the great majority of them, of course, on the Australian mainland. In Australia’s island screen, where Ferdinand was eventually to operate, the system was still very thin and spotty, but at least a nucleus existed, and funds were available. Upon the outbreak of war… the Navy directed the organization, such as it was, to commence functioning.”10 Predicting the next war has historically been next to impossible, but as the Coastwatchers demonstrate, actively preparing intelligence during periods absent of major conflict assists in preparing for the next major conflict.

Naval intelligence must be proactive to be effective across the competition continuum. In other words, the naval force must always be collecting intelligence. Just as conflict is continuous in its different forms so is the single naval battle and the necessity for continuous intelligence. The United States Marine Corps states, “The integrated single naval battle begins with the Phase 0 battle for influence, allowing discriminating force application based on understanding gained from forward presence.”11 Proactive intelligence achieves this “understanding gained from forward presence.”12 Continuous intelligence collection is necessary for a navy in performing its functions across the range of enduring competition, whether that be in relative peace or relative war.

Naval intelligence must be multi-domain just as the single naval battle addresses the multi-domain operating environment. The single naval battle seeks to, “link the elements of naval power projection into a seamless web of integrated capabilities across air, maritime (surface and subsurface), land, space, cyber and cognitive domains.”17 The Coastwatchers collected intelligence from the sea, air, and land, and so must modern naval forces. Furthermore, new technologies now enable navies to collect intelligence from new domains and old domains in new ways. The space and cyberspace domains were not available to the Coastwatchers, but are becoming increasingly important today. The number of satellites in orbit is expected to increase five times in the next ten years.18 In the cyber domain, CISCO forecasts that the number of networked devices globally will be three times that of the number of humans on earth by 2023.19 Analyzing threats through multiple domains is imperative in preparation for the future single naval battle. Naval intelligence collection must occur in all domains to prepare for these threats.

The Coastwatchers capitalized on access to the archipelagos of the South Pacific and the knowledge of individuals who were familiar with the environment. The Coastwatcher organizations were comprised of islanders, settlers of European descent, who knew how to survive on these islands and were familiar with the natives. The title of islander was earned once a settler had spent four or five years living on one of the islands, ensuring their knowledge of the environment. These islanders had various occupations such as administrative officers, miners, prospectors, missionaries, planters, or patrol officers.20 Additionally, island natives were an essential part of the Coastwatcher networks. They provided assistance that was not otherwise available by serving as scouts, spies, couriers, radio operators, medics, porters, and navigators.21 Natives also provided force protection from Japanese patrols. Some natives had an unwavering commitment to the Coastwatchers effort, while others allied with the Japanese as they began occupying islands. The allegiance of the natives often determined the success of the Coastwatchers on a particular island. Commander Eric Feldt stated, “There was no possibility of any European posing as a native. Concealment was our only hope and this meant mobility… In other countries, however, it might be very different and the best concealment might be in the slums of a large city. Anywhere, the natives of the country will be the best operators.”22 The Coastwatchers were fortunate to have had access and local support in these island locations, but the end of colonial empires makes access and local support much less certain in the present day.

Access and local support are essential to effective intelligence during the single naval battle. The proactive multi-domain intelligence operations of the single naval battle require diplomatic partnerships and agreements to provide placement and access. Furthermore, host nation or local support is important for the variety of tasks and knowledge that only natives can provide in maintaining such a network. Proactive naval intelligence requires access and support from partners and allies.

The historic success of the Coastwatchers provides valuable insight for naval intelligence in the future single naval battle. Proactive intelligence, multi-domain intelligence, and local access and support remain necessary for an effective naval intelligence operation. Naval forces will grow stronger through these lessons as the world’s security environment becomes more complex and dynamic. The future challenge is to harmonize these lessons into a single integrated naval force. As the naval force tackles this and other challenges, remember the Coastwatchers.

Captain Michael Van Liew is a United States Marine Corps Intelligence Officer who, at the time of original publication, was assigned as a student at Expeditionary Warfare School in Quantico, VA.

7. Peter Djokovic, “The Coastwatchers and Ferdinand the Bull,” Semaphore 4 (2014), 2, https://www.navy.gov.au/media-room/publications/semaphore-coastwatchers-and-ferdinand-bull.

2 thoughts on “The Coastwatchers: Intelligence Lessons Learned for the Future Single Naval Battle”