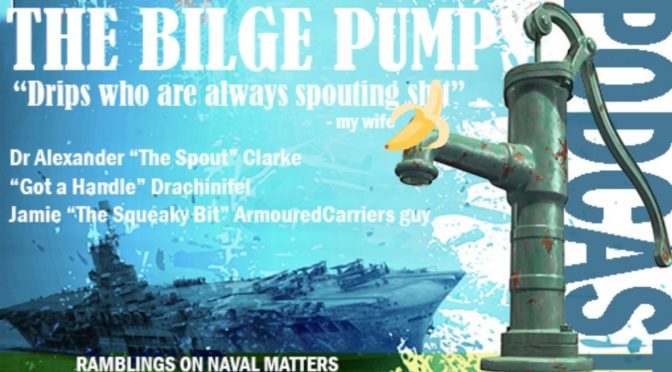 We are The Bilge Pumps, a podcast crew of three naval geeks, with occasional guests, who squeak a lot about naval stuff and sometimes when moving. We include myself – Alex Clarke – known as much for my addiction to Irn Bru as my PhD and NavalHistoryLive Youtube channel, Alex ‘Drach’ Pocklington, also known for his love of Irn Bru and being an engineering savant, but mainly for the excellent Drachinfinel Youtube channel, and Jamie Seidel, journalist with a passion for armored carriers so great he has set up a website, a Youtube channel, and a Twitter feed all about them. Join us for our second episode to enjoy what is an informative, but also humorous take on current-ish affairs in the maritime and naval world.

These roughly 70-minute podcasts will hopefully make you smile as much they think you think, so please listen, enjoy, and feel free to send us topic suggestions to our Twitter feeds, just make sure to include #Bilgepumps when you do.

One thought on “The Bilge Pumps 2 – The Sequel”