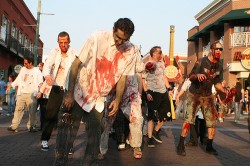 What can zombies teach the military and law enforcement about asymmetric warfare and counter-terrorism? San Diego is about to find out thanks to a privately run conference coinciding with Halloween. (Note: NOT part of International Maritime Satire Week):

“This is a very real exercise, this is not some type of big costume party,” said Brad Barker, president of Halo Corp, a security firm hosting the Oct. 31 training demonstration during the summit at a 44-acre Paradise Point Resort island on a San Diego bay. “Everything that will be simulated at this event has already happened, it just hasn’t happened all at once on the same night. But the training is very real, it just happens to be the bad guys we’re having a little fun with.”

Hundreds of military, law enforcement and medical personnel will observe the Hollywood-style production of a zombie attack as part of their emergency response training.

In the scenario, a VIP and his personal detail are trapped in a village, surrounded by zombies when a bomb explodes. The VIP is wounded and his team must move through the town while dodging bullets and shooting back at the invading zombies. At one point, some members of the team are bit by zombies and must be taken to a field medical facility for decontamination and treatment.

“No one knows what the zombies will do in our scenario, but quite frankly no one knows what a terrorist will do,” Barker said. “If a law enforcement officer sees a zombie and says, ‘Freeze, get your hands in the air!’ What’s the zombie going to do? He’s going to moan at you. If someone on PCP or some other psychotic drug is told that, the truth is he’s not going to react to you.”

It’s an interesting way to generate interest and use an outside-the-box scenario to develop insights into parallel reality based situations, similar to the way that military academics mine history for case studies or futurists use the intelligent prognostications of science fiction to think about the future of society and technology and its implications for warfare. Hopefully this scenario doesn’t fall into the latter category. Click on the link above for the full story.