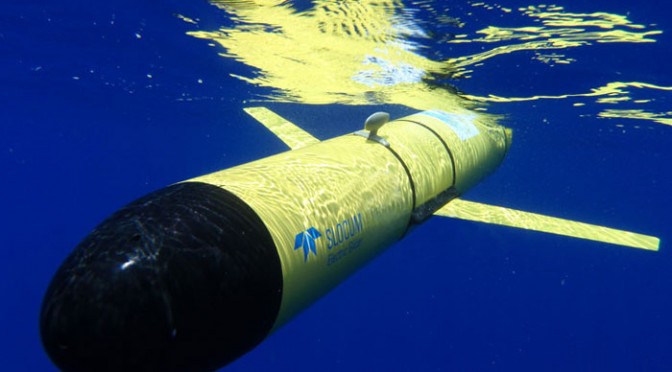 The US Navy recently announced that it will make more use of submarine drones, contracting with marine technology developer Teledyne Benthos to re-purpose the Slocum Glider as an instrument used for military activity. The contract is worth $203.7M.

If you haven’t heard of it yet, here is what the Slocum Glider is: a 5 foot-long autonomous underwater vehicle capable of moving to specific locations and descending to depths of 4,000 feet. It is driven by variable buoyancy, and it can move both horizontally and vertically.

The Slocum Glider can be programmed to patrol for weeks at a time, collecting data on its environment, surfacing to transmit to shore while downloading new instructions at regular intervals.

Compared to traditional methods, the drones have a relative small cost: the need for personnel and infrastructure is reduced to its minimum and the vehicle is able to work around the clock and around the calendar. It works very well: in November 2012, an autonomous glider set a Guinness World Record by traveling over 14,000 kilometers on an autonomous journey of just over one year duration!

Many Navies and ocean research organizations already use a wide variety of gliders, which cost around $100,000. But the US Navy now plans to increase the number of those drones from 65 to 150 by 2015. In its 2015 budget request, the US Defense Advanced Research Projects Agency even claimed for $19 million to develop drones “that can provide non-lethal effects or situational awareness over large maritime areas.” This represents a spending increase of nearly 60 percent over 2014!

The good news for us is that these submarine drones, unlike the majority of airborne drones, won’t use environmentally unfriendly fuel. Instead, the glider is propelled by the thermocline, which is thermal energy found between the upper and lower mixed layers of sea water. The upper surface has a near atmospheric temperature while the deep water ocean has a temperature situated between 2 and 4 °C.

Those new submarine drones can be used to predict the weather by collecting an enormous amount of data at various spots in the ocean. In 2011, a US Government Accountability Office report warned that without improvements to their earth-monitoring capabilities, the USA would “not be able to provide key environmental data that are important for sustaining climate and space weather measurements”; data for warnings of extreme events such as hurricanes, storm surges, and floods would then be less accurate and timely. This led the US Navy to make a deal to share the Navy Ocean Forecast System software with the National Ocean and Atmospheric Administration.

But that’s not all: another autonomous submarine drone, the Bluefin-21, created by the American company Bluefin Robotics, has scanned just over 300 square kilometers of Indian Ocean seabed searching for the wreckage of the lost Malaysian plane, whichdisappeared from radar screens on 8th March. The drone was launched from the Australian Defence Vessel Ocean Shield.

Bluefin-21 is an autonomous underwater vehicle, 4.93 meters long and 53 centimeters in diameter, specially designed for detection, recognition and statements in the seabed.It is capable of carrying various sensors and payloads. This technology, called side-scan sonar, builds a picture of the seabed at a 4500 meters depth.

This drone also has a significant autonomy, 25 hours at 3 knots average, which allows it to achieve extended underwater missions.It weighs 750pounds, which makes it easily transportable by a wide range of boats.

From all this, it is clear that submarine drones will become an important part of the navies’ equipment!