Civilian authorities spot a foreign fishing vessel trawling their nation’s territorial waters. The authorities move to intercept but are held at bay by the offending vessel’s government escorts. The scene: Gibraltar. The actors: The U.K. and Spain.

As readers of this blog know, stand-offs over fishing rights and territorial disputes have made a lot of news of late when they occur between China and its Asian neighbors. But they don’t happen solely in the Pacific.

The long-running territorial dispute between Spain and the U.K. over the famous gateway to the Mediterranean has grabbed headlines locally in recent weeks as Spanish trawlers have twice fished in Gibraltar’s territorial waters while Spanish Civil Guardia vessels escorted the vessels.

According to the BBC, in the latest incident four police vessels and a British Royal Navy patrol boat intercepted a single trawler but did not attempt to board the vessel as it was shadowed by two Civil Guardia vessels. Spokesman for the Royal Gibraltar Police, Richard Ullger, said “we avoid active enforcement because it could provoke an incident.” Yet the captain of the Spanish trawler, Francisco Gomez, highlighted the tenseness of the confrontation claiming the vessels were so close that some of the hulls scraped each other. After 6 hours the vessel left. The Royal Gibraltar Police will issue a court summons for the crew, but it is not expected that they will appear in court.

In light of the incident a Member of the European Parliament for Gibraltar, Julie Girling warned, “What we don’t want in Gibraltar is a situation like the Falklands: there seem to be disturbing parallels in attempts to damage the livelihoods of Gibraltar’s fishermen.”

Girling was of course referring to the current situation in the Falkland’s, not the situation preceding the 1982 war. Yet a comparison between Gibraltar, the Falklands (then and now), and the South China Sea yields interesting insights.

In all three locales, resources contained therein play a role in pushing confrontation. In the South China Sea, rich fishing banks and oil exploration are primary causes for the scramble for territory. In Gibraltar, resources are not really the prize (besides for the local small-scale fishing operations) – the fishing expeditions merely provide a convenient means for pushing the larger territorial claim. Resources didn’t play much part sparking the Falklands War, but today many believe the resurgence of Argentine clamor for the islands is due to the potential oil reserves and fishing that invigorated the islands since the war. Today, the U.K. claims harassment of its own boats in Falklands water by Argentine coast guard vessels.

With regards to both the Chinese and Spanish fishing vessels, one of the more interesting questions is whether it is fishermen or government officials who are the driving force for journeys into contested waters. Are the maritime officials simply assisting their citizens in pursuit of excellent fishing grounds, or are they providing safety to vessels recruited and sent forward in calculated moves? How high in the government do such sensitive expeditions need approval?

The strategic value of these bits of territory also plays a role in their attraction. Gibraltar, dominating the chokepoint between the Mediterranean and the Atlantic, also oversees much traffic that heads through the Suez Canal. Islands in the South China Sea sit astride trade routes vital for many economies, and can serve as forward operating bases or logistics and communications relays. The only exception is the Falklands, despite one Argentine paper’s claim at the time of the war that the islands were “strategically important because they were on a direct maritime route to India.”

One of the most important distinctions between the South China Sea and the other two instances is that of self-determination. On the issue of sovereign control of territory, international law, international institutions, and disinterested intentional sentiment routinely come down on the side of the principle of self-determination. In Gibraltar the locals have voted in referendums for continued British rule (by 98.9% in 2002). The British meanwhile say they are open to a UN-sponsored referendum in the Falklands, where a similar result is likely, and tellingly it’s an offer the Argentines ignore. This makes it hard for Argentina or Spain to rally legal or global public opinion to their side. The difference for the South China Sea islands is that by and large there are no locals. Most of the bits of territory are tiny non self-sustainable pieces of rock or submerged reef, making resolution harder.

Of these points of conflict, the only that so far turned into a shooting war in modern times was the Falklands. In that case the dictatorship generated a nationalist distraction from a plummeting economy. As smarter people than me have said, this is one good reason no one should wish for the Chinese economy to slow precipitously. While Spain and Argentina today are in their own economic messes, both have the safety valve and check on their actions of democracy.

The good news is that the most common denominator in all of these cases is at least lip service towards peaceful resolution. Despite the nationalist push for the Falklands, President Cristina Kirchner has stated she will obtain the islands only through peaceful means. Foreign ministers of Spain and Britain met Tuesday and urged a peaceful resolution to the fishing issue. In Cambodia the defense secretaries of China and Philippines did the same on the same day.

One final thought. All of this shows the importance of coastal patrol forces, including those administered by civilian agencies, and that they can be used for either defensive or offensive strategic-level maneuvers. Interesting then to see that the Chinese ship construction buildup is not in naval forces alone – the Chinese Maritime Surveillance agency will commission 36 cutters in the next 3 years. (h/t CGblog) 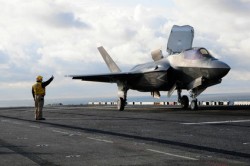